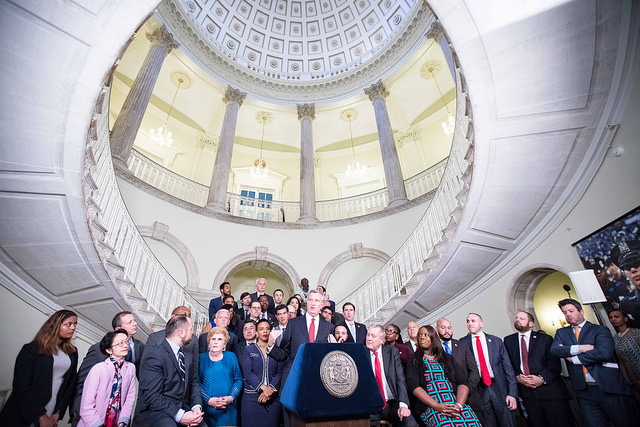 Update: This article was published on Wednesday and the City Council passed this legislation on Thursday afternoon with a 42-5 vote. Council Members Joe Borelli,  Chaim Deutsch, Steven Matteo, Carlos Menchaca and Eric ulrich voted against the bill. Council Member Jumaane Williams abstained from the vote.

A bill that would allow elected officials to set up trusts to raise money from private sources to cover legal fees is set to be approved by the New York City Council on Thursday.

The legislation, sponsored by City Council Member Stephen Levin, would allow city officials to raise as much as $5,000 from individual donors through trusts, to pay for legal fees arising from criminal or civil investigations that are unrelated to their governmental duties, such as those involving campaign activity (legal fees related to government duties can be covered by public funds).

The trusts would have to file detailed quarterly reports on fundraising and spending with the city Conflicts of Interest Board (COIB), and would be prohibited from taking donations from lobbyists, corporations, LLCs, and people doing business with the city. The reports will be posted publicly online.

Levin’s bill is meant to fill a gap in the city’s legal framework that allows elected officials to use taxpayer funds to cover their defense in investigations arising from their official duties, but not in the case of non-governmental activity. Mayor Bill de Blasio found that out the hard way after facing dual state and federal probes into his fundraising activities through outside nonprofit groups and, in one, related government actions, which eventually led to no charges being filed but left the mayor with hefty legal fees running into the hundreds of thousands, even after he reversed course to utilize public funds to cover the bulk of over $2 million in fees related to the federal inquiry of whether he directed government favors based on campaign donations.

The mayor initially sought to use a legal defense fund to cover the costs but the COIB issued an advisory opinion limiting any donations to a mere $50, viewing them as gifts to an elected official which are severely limited by law. The mayor then used public funds to pay for the costs related to his government duties -- about $2.6 million -- but said he could not cover a separate bill that related to his non-governmental activity. De Blasio is not the only elected official who has had significant legal bills to deal with related to their official or non-governmental activity, he and others have pointed out.

The legislation is scheduled for a vote at a hearing of the City Council’s Governmental Operations Committee on Thursday morning, in what seems to be a rushed vote -- the bill was introduced on January 9 and the committee held an initial hearing on it last Monday, at which several questions were raised by COIB representatives and Council members. Spokespeople for Levin and for Council Speaker Corey Johnson said the bill is expected to pass through the committee and to be approved at a meeting of the full Council in the afternoon. It is very rare for any legislation at the City Council to move so quickly from introduction to passage.

The government reform community is split in its opinion on the legislation. Groups like Common Cause New York and Reinvent Albany have supported the effort to create a framework around legal defense funds, while another reform group, Citizens Union, disagrees with the very concept. In a letter of opposition sent to the Council on Wednesday, Citizens Union argued that the bill “creates the risk or appearance of corruption and undue influence, and will necessitate a complex regulatory scheme to mitigate.” The group urged the Council to, at minimum, tweak the legislation to bring donation limits in line with the lower limits that apply to campaign contributions.

The Campaign Finance Board, which monitors campaign fundraising and expenditure in municipal elections, also raised concerns about the bill. Executive Director Amy Loprest noted in her testimony before the governmental operations committee on January 14 that the legislation seems to allow officials to use trusts to pay for fines incurred from campaign finance violations. Officials can already cover those costs from their campaign accounts, which are subject to stricter fundraising limits.

“By providing certain candidates, i.e. those who are elected officials or public servants, with an additional vehicle to raise funds, Int. No. 1325 creates a path for those candidates to solicit and accept contributions from individuals that aggregate well over the existing contribution limits,” Loprest said in her testimony, urging that the bill be amended. “A clear majority of voters in last November’s Charter referendum voted to reduce these limits by more than half, with reducing the risk of corruption as the main rationale.”