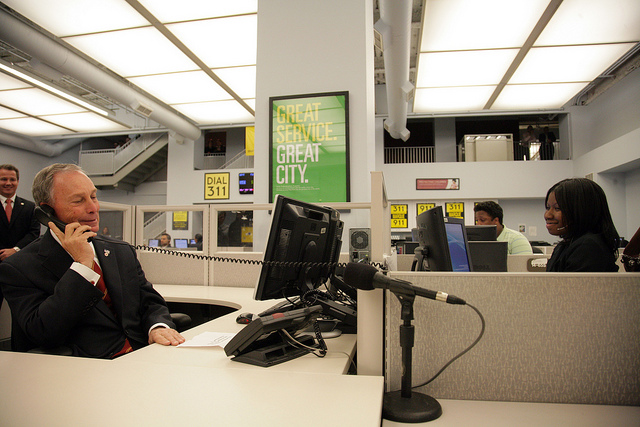 The city’s 311 non-emergency call center for information about city services and to lodge complaints is nearing a mid-year re-launch, its first major overhaul since being introduced by Mayor Michael Bloomberg in 2003. The revamped system, estimated to debut in July, will modernize 311’s currently outdated system that limits its capability to assist New Yorkers. The next iteration of the system will eventually allow for increased language access, user accounts to track inquiries and complaints, and a better app experience.

The City Council’s Committees on Government Operations and Technology held a joint oversight hearing on 311 last week, the first of two such hearings that will be held over the course of several months. The January 17 hearing was focused on the functions and management of 311, and also dealt with two Council bills related to the call center, while the second hearing will focus on city agencies’ responses to 311 complaints and service requests.

City Council Speaker Corey Johnson led the hearing, alongside Government Operations Committee Chair Fernando Cabrera, a Bronx Democrat, and Technology Committee Chair Peter Koo, a Queens Democrat. Johnson, a Manhattan Democrat, began the hearing by saying that “the solutions and technology of 2003 are serving New Yorkers in 2019 and that I believe is unacceptable” and that “other cities are moving past us.”

The implementation of 311’s new “customer relationship management” (CRM) platform was a focus of the hearing. The new system 311 is transitioning to is back-end first, so callers will not immediately notice a difference from the old platform. The update is meant to provide a foundation so that 311 will then be able to offer new features to the public, including better language access, a second major focus of the recent hearing.

According to 311 Executive Director Joe Morrisroe, 311 fields over 120,000 calls per day and 42 million contacts per year. This is more than all other municipal 311 systems combined. Morrisroe said “the 311 team is focused on meeting the customers where they are.” He said that 311 conducts two customer surveys per year. One of the surveys, conducted once a year by the CFI Group, a consultancy, showed that “311 ranked equal to or better” than private sector contact centers. 311 also conducts quarterly in-house surveys.

However, as Koo noted, the surveys are only conducted in English. This may skew the results because of the disparity of service between English-speaking callers and non-English-speaking callers, a key theme of the oversight hearing, which included discussion of a bill related to 311 and foreign language access.

The language barrier faced by many New Yorkers when contacting 311 was the most frequent issue brought up at the hearing. Under the current system, callers are asked through an automated message to select their language, but all callers, even those who select one of the six non-English options provided, are then directed to an English-speaking 311 operator, who has not been informed of their language selection. Callers must then communicate their language preference to the operator, who can then connect them to a translator in one of 182 languages.

As several Council members noted, this requires the caller to know some English to then be able access 311 in their preferred language, a protocol that may lead many callers to give up and not access the information they are seeking when they first dial -- an issue that a Council bill is seeking to explore through new reporting requirements. Johnson called the language barrier “unacceptable.” The speaker said that he had an Armenian staff member attempt to call 311 and it took 17 minutes for the staff member to be connected with the proper translator.

To address the issue, Council Member Carlos Menchaca, a Brooklyn Democrat, has sponsored a bill, Intro. 1328, which would have 311 develop a new protocol for the languages spoken by callers and would require 311 to track and report calls dropped seemingly because of insufficient language assistance. Menchaca said the bill is important because “everyone has a dignity to be heard and every day we’re trying to figure out how that can happen in their preferred language.”

“I can empathize,” Morrisroe of 311 said, adding that “311 wholeheartedly agrees with the spirit of the legislation.” However, Morrisroe gave two reasons for opposing the bill. He said that 311 already has a protocol in place to identify languages and the technology to support the bill’s requirements is not currently available. He called operators not knowing about a caller’s language selection a “limitation” of the current system and said that 311 would make solving the issue a “priority” going forward.

Menchaca was not satisfied with that answer, stating that the City Council creates policy and city agencies are meant to implement that policy. He then said “the fact that this does not exist out there right now has nothing to do with the fact that we can pass this bill and really force you all in a room to figure this out with the [telecommunications] industry.”

Another language-related issue brought up at the hearing was that currently the automated message that begins every 311 call includes options for six languages. This offering is below the ten-language requirement from a previous city law. Morrisroe said that the languages were chosen and sequenced based on the volume of calls received and that current technology limited the number of languages that can be included.

During the discussion of the transition to the new customer relationship management (CRM) platform, Samir Saini, the commissioner of the city’s Department of Information, Technology, and Telecommunications (DoITT), said the new platform will be ready to be rolled out by “the middle of the year.” Saini said that the platform upgrade will focus on the back-end of 311’s system, which will modernize a system that hasn’t been updated since it was first installed in 2003 and allow the agency to offer new features later. These features, like potentially 10 language options instead of the current six, will not be available right away when the new platform debuts later this year, but will gradually be added to the new system.

DoITT currently has a 12-month, $24 million contract with IBM to transition from the old system, dating back to 2003 when 311 was created, to a new modern system for receiving and tracking service requests and complaints. After the roll-out, DoITT will be able to manage the system on its own without IBM’s assistance.

The platform upgrade will allow customers to create online accounts to track the progress of their complaints and service requests, which Johnson had brought up as an example of 311’s current system being outdated. The upgrade will also allow 311’s mobile app to be offered in languages other than English, along with needed flexibility for new features on the app. Currently, the options to make complaints on the app are limited (Johnson pointed out that New Yorkers are unable to report mold through the app). Saini said that there was a “queue of enhancements” already planned to be made, but did not elaborate further.

Council Member Ben Kallos, a Manhattan Democrat, said that homelessness was the top 311 complaint for his Upper East Side district. He pointed out that the current mobile app does not allow for a specific location for a seemingly homeless person on the street, and instead locates them by the nearest address. Saini said that changing this will be a top priority for the new mobile app.

The second bill discussed at the hearing was Intro. 0188, which is intended to stop harassment of property owners through 311. The bill would have 311 stop referring anonymous calls about a property that has been harassed with repeated complaints “that cannot be substantiated or that are substantiated but not illegal.” Morrisroe of 311 objected to this bill, stating that “while 311 understands the intent of the proposed bill, we believe that what this bill proposes will have two unintended consequences.” He said that landlords could potentially game the system to get a temporary reprieve from complaints and that the bill risks a citizen’s right to report a complaint without fear of retaliation, citing immigrants and tenants as vulnerable populations.

Council Member Kalman Yeger, a Brooklyn Democrat, took an issue with Morrisroe’s objections to the bill, telling the 311 director that “not everything that comes out of this Council is dumb.” He told Morrisroe that he’d like to “roll the dice” and see if abuse Morrisroe predicted would actually happen. On the second objection, Yeger said he did not think it would be a concern and did not see a correlation between the bill and an increased risk of retribution. He also said he thought the bill wasn’t harsh enough on abuse, saying that he would like to make it a crime to make repeated unsubstantiated complaints about the same property.

Council Member Cabrera asked about the ten-second increase in wait times for 311 callers in the past year. In 2018, the average wait time was 28 seconds, which is just under the 30-second industry standard for 311. Morrisroe said it was in part due to the extreme cold temperatures of January 2018, which led to an increase in complaints about problems with heat or hot water. Additionally, he pointed to 311 taking on the responsibility of handling appointment requests for bulk item collection as a cause of increased wait times.