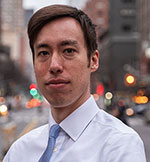 Ben Yee is an entrepreneur and activist who has been involved with Democratic politics and government on several levels. Now a candidate for New York City Public Advocate in the special eleciton set for February 26, Yee joined the show to discuss his resume and vision for the office, which he would focus heavily on civic engagement.