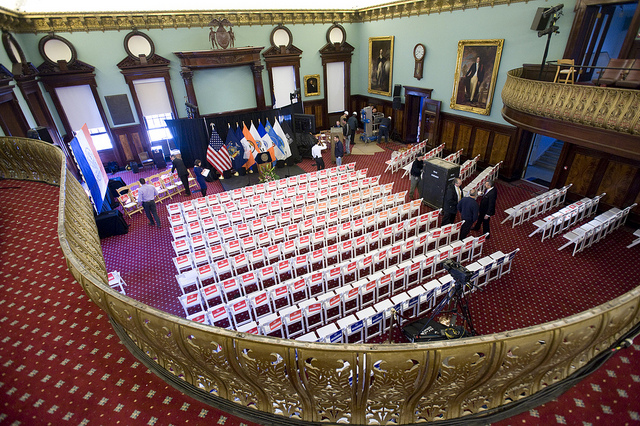 The 2019 Charter Revision Commission on Thursday officially decided on the issues it would explore and evaluate going forward, settling on four overarching areas of consideration and several specific policy recommendations within each bucket.

The commission, which was empaneled through City Council legislation, features appointees from various elected officials and the Council, and first met in July of last year, is working on a longer timetable than that of last year’s mayor-empaneled commission, and is taking a broader look at the city’s central governing document. Its recommendations will be put on the November 2019 ballot as referenda.

The four topic areas of focus over the next several months will be elections, governance, finance, and land use, and the proposed policies that the commission will study were drawn from over 600 submissions from the public.

The commission made clear that the proposals are not what will appear on the ballot, but rather the specific policy ideas that it will further study as it decides what to put before voters for yes or no selections.

“A vote now is a vote to explore further,” said Gail Benjamin, the chair of the commission and the former head of the City Council’s land use division.

The elections bucket includes ranked-choice voting (otherwise known as instant-runoff voting), elimination of “duplicative primary elections,” appointments to the redistricting commission and how Council District maps are drawn, the appointment structure at the Campaign Finance Board, and potential alternative campaign finance systems like a “democracy voucher” system.

The governance bucket, which some commissioners argued was too broad of a category, consists of allowing the Council advice and consent powers on certain mayoral appointees; evaluating the power, roles, and structures of the borough presidents, public advocate, corporation counsel, Civilian Complaint Review Board, Conflicts of Interest Board, and Board of Statutory Consolidation; lobbying by former public officials; and police disciplinary practices.

Hirsh suggested that the commission add consideration of a Chief Diversity Officer in the Mayor’s Office and in every city agency, noting that only seven agencies currently have one and recent Council legislation creating one in the Department of Citywide Administrative Services to oversee diversity in hiring at agencies. The commission approved the amendment, which echoes a call from Comptroller Scott Stringer for such officers.

In the finance realm, the commission decided to study the issues of more detailed units of appropriation in the city budget, making the capital budget correspond to “discrete projects,” a “comprehensive city planning framework” for capital budgeting and land use, independent budgeting for certain agencies and offices, the management of public pensions, and evaluating procurement and contract registration processes and policies.

The final bucket, land use, consists of the comprehensive planning framework that overlaps with finance, evaluating the city’s Uniform Land Use Review Process (ULURP), including the possibility of a public pre-ULURP process, and evaluating the four land use boards: the City Planning Commission, the Landmarks Preservation Commission, the Board of Standards and Appeals, and the Franchise and Concession Review Committee. The consideration of the LPC was added as an amendment by Commissioner James Caras.

Going forward, the commission will conduct research on the proposed policies, as well as further public hearings. Its final report and ballot measure recommendations will be due in early September and in order to appear on the November ballot, but there will be other steps in between.