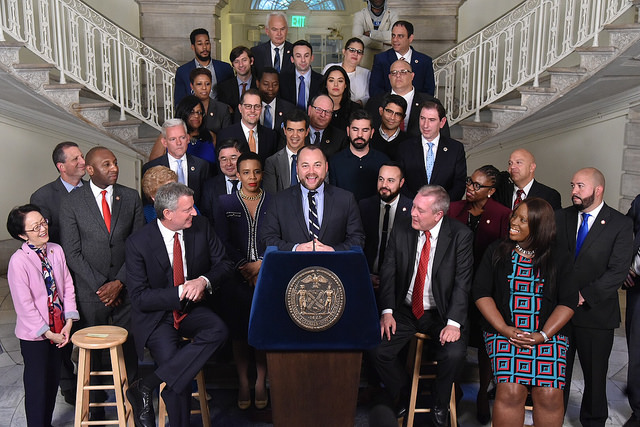 The New York City Council wants a voice in picking the commissioner of the NYPD, more independence for ethics and oversight agencies, and greater power over the city budget.

Those are among the recommendations that the City Council made in a new report to the 2019 Charter Revision Commission, seeking amendments to the city’s governing document that would broadly strengthen the powers of non-mayoral elected officials and require changes to how the city budgets, decides land use changes, and plans for the future.

The 2019 commission was created last year through legislation passed by the Council and spearheaded by then-Public Advocate Letitia James and Manhattan Borough President Gale Brewer. Its members are appointed by a variety of public officials, including the mayor, comptroller, borough presidents, and City Council speaker, Corey Johnson, who also appointed the chair.

A separate commission, conducting its work in 2018, had previously been appointed by the mayor and put three questions on the November ballot that were overwhelmingly approved.

On Thursday evening, the Council-created commission finalized a list of focus areas that will be the subject of several public hearings in the next few months before its final report is due in September. Ultimately, its recommendations will be on the ballot for voters to approve or disapprove this November.

The City Council’s 37-page report to the commission details several recommendations in key areas on the balance of power in government, voting processes, police oversight, city budgeting and contracting, and land use and planning policy. The report is authored by Council Speaker Corey Johnson, Council Member Fernando Cabrera, who chairs the Council's government operations committee, and Brad Lander, the deputy leader for policy.

“It’s been almost 30 years since the last comprehensive Charter Commission and based on the public participation in the 2019 Commission’s process, it is clearly time for change,” Johnson said in a statement. “In formulating the Council’s proposals, we took into consideration all of the public testimony given as well as Council Member input, and we are confident that our recommendations will improve the way our City is governed and make life better for New Yorkers.”

Balance of Power
The report proposes requiring advice and consent powers for the City Council in appointing the city’s corporation counsel, the NYPD commissioner, City Planning Commission chair, the chief administrative law judge and the executive directors of the Campaign Finance Board and Conflicts of Interest Board (none of these positions are currently subject to Council approval). It also proposes implementing three-year terms for each of those positions.

It also proposes requiring the City Council’s approval before the mayor can remove the commissioner of the Department of Investigation, currently the one department commissioner the Council must approve after mayoral nomination. That proposal may be a response to the controversy involving the termination of former DOI Commissioner Mark Peters, who had been a thorn in the side of Mayor Bill de Blasio’s administration. Though Peters was removed for overstepping his authority, Council members at the time raised concerns about the agency head’s ability to stay independent and investigate the very mayor who appoints them without worrying about retaliation.

The Council also recommends giving the City Council, the public advocate, and the comptroller one appointment each on the Conflicts of Interest Board, which is currently made up entirely of members appointed by the mayor. “No single elected officer should be solely responsible for the appointment of COIB and by dividing the appointments between all the branches of City government, COIB can more effectively meet the goals of its mission,” the report reads.

A few of the proposals would also increase the authority of other elected officials, including the public advocate, an office with a small budget and limited powers but a strong bully pulpit. The Council proposes allowing the public advocate to direct DOI to conduct investigations and giving the office an appointment at the Civilian Complaint Review Board (CCRB), which probes NYPD officer misconduct. The report also recommends independent budgets for the public advocate and comptroller — the two offices would be able to submit their own budget proposals into the mayor’s executive budget — and guaranteed “non-negotiable” budgets for borough presidents and community boards based on a percentage of an existing, related budget.

Voting and Elections
The upcoming special election for public advocate on February 26, with 17 candidates on the ballot, illustrates cause for some of the issues that the Council’s report addresses, it says. It advocates for establishing ranked-choice voting, also known as instant runoff voting, in all primary and special elections. Without ranked choice -- which allows voters to pick their preferences by ranking and distributes second-rank votes if no candidate initially meets the required vote threshold -- a candidate in a crowded special election could win with a small total vote and percentage of the ballots cast.

The report also notes that establishing ranked-choice voting would eliminate the need for costly primary and general elections that are held after a special election -- for instance, the winner of the public advocate special will have to defend their seat later this year. The report recommends doing away with those contests since ranked-choice would ensure that a candidate with deep support is elected to the seat and serves the remainder of a term.

Police Oversight
The Council recommends giving the public advocate the power to appoint one member of the CCRB, reducing one of the mayor’s appointments, and also proposes that the agency’s chair be chosen jointly by the mayor and the Council.

It also pushes for putting into law the CCRB’s Administrative Prosecution Unit, which conducts civil trials for officers accused of severe misconduct. The APU was created in 2012 through a memorandum of understanding between the NYPD and the CCRB, which the report points out could be revoked by the police commissioner, threatening the independence of the oversight agency.

The Council also proposed strengthening the CCRB in other ways, tying the agency’s budget to the NYPD’s, giving it subpoena power, and establishing a time-bound process for the NYPD to respond to the agency’s disciplinary recommendations.

Budgeting and Contracting
One of the more prominent roles of the City Council is its power to approve the city’s annual budget in negotiation with the mayor. For years, Council members have cried foul about the imbalance in those negotiations and the “budget dance” -- purposefully underfunding an item in initial proposals only to fully fund it later on, knowing all along the plan is to do so -- that mayors past and present have used as leverage.

In his first year as Council speaker, Johnson pointed to the imbalance and put forth a new focus on the city’s capital budget and made the level of rainy day funds put away each year a priority. The Council would put new related measures into the charter.

Among other things, the report proposes requiring the mayor to submit revenue estimates at a fixed date in the budget process, allowing the Council to estimate how much the city should be spending, and calls for increased transparency in the expense budget, particularly by tying spending to performance measures.

It also proposes limits on the mayor’s control over appropriated funds, and more efficiency and transparency in the long-term capital planning process.

Perhaps the biggest budgetary change the report recommends is the creation of an explicit Rainy Day Fund, which is currently prohibited by a law in place till 2033. The Council recommends establishing the fund in the charter as well as seeking state authorization for it.

On city contracting, the report recommends several improvements including setting time limits for specific processes, such as requiring that oversight agencies review contracts within 30 days (the same limit applied to the Comptroller’s office), and involving the comptroller’s office at an earlier stage.

Land Use and City Planning
The report advances several suggestions for making the city’s land use process “more equitable and rational,” chiefly by requiring a comprehensive plan for the city every ten years, created with community feedback, to inform policies on land use and infrastructure.

The Council also seeks to enhance the “fair share” system which determines how municipal facilities and infrastructure is sited across the city. The current “fair share” guidelines have often been criticized as inadequate and have not prevented the concentration of undesirable facilities, often in low-income communities of color. The Council’s report proposes changing those guidelines into binding rules to be followed and updated regularly along with other improvements to the siting process.

The Council is also attempting to wield more power over land use applications, giving them the ability to modify city-sponsored land use project during the approval process.