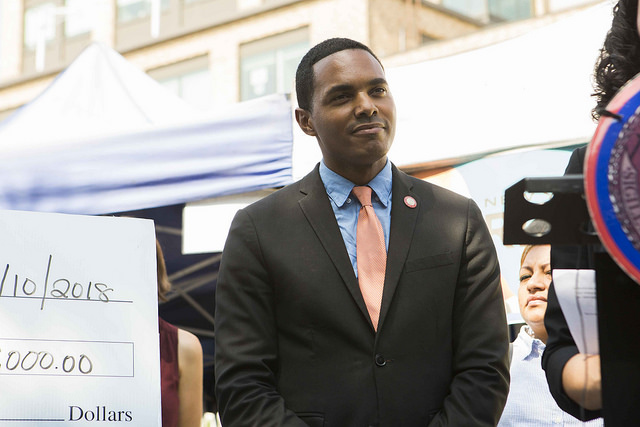 The polarizing issue of local retailers going cashless has gotten the attention of New York City Council members, and on Thursday a Council committee will hear testimony on the topic and consider competing legislative proposals.

After Torres introduced his bill last fall, it generated widespread media coverage and ignited a debate on the convenience of credit and debit cards versus how refusing cash excludes individuals without plastic. Notably, as of Tuesday afternoon, Torres’ bill has 18 co-sponsors in the 51-seat Council, including committee chair Espinal. Cabrera, along with Council Member Andrew Cohen, also a Bronx Democrat, are the lone sponsors of his bill.

Cashless retail establishments are seen as problematic for the “unbanked” or “underbanked,” those without bank accounts and those without easy access to banks, respectively. In 2015, an Urban Institute study surveying New Yorkers found that nearly 12 percent, or 360,000 households, did not have bank accounts. The finding is higher than the approximately 8 percent of Americans nationwide who are unbanked. An additional 25 percent, or 780,000 New York households are underbanked, the study found, compared to the 20 percent of underbanked Americans across the country.

Shoppers in the U.S. are expected to generate 190 billion cashless transactions this year, including e-commerce, according to Kristen Regine, a professor of marketing at Johnson & Wales University in Providence, R.I. She cites millennials as leading the way on the consumer side, but the move is likewise a matter of convenience for retailers.

“A lot of people think money is dirty and they don’t want to touch and deal with it. For retailers, it’s more labor intensive to deal with, to reconcile the days’ end transactions. And for the retailer thinking about line queue, it’s swipe and go and quicker to get through the line. In some places you’re not even signing your name anymore,” said Regine. “In areas where there’s a lot of traffic and robberies, it’s safer for the person working behind the counter not to have cash.”

The growing trend of exclusively requiring plastic or mobile pay, like Apple Pay, for purchases is here locally, with fast casual chains such as Sweetgreen and Dig Inn, or higher-end restaurants such as Danny Meyer’s epicurean empire adopting the policy.

Torres, seeking to ban establishments from going cashless, is more concerned with inequality baked into cashless policies. “If you have the money you should be able to use it. Cash is the great equalizer and the universal mode of currency. Not everyone accesses credit or debit, but everyone uses cash at some time in their life,” said Torres. “In New York City, we have a historic opportunity to set a national precedent for rest of country to follow.”

As for the country, according to Regine, over 40 percent of U.S. adults don’t carry cash. “It’s just kind of our way of life,” she said.

Yet, both Cabrera and Torres want to account for that other 60 percent, which may be higher in New York City given the unbanked population. Thursday’s hearing will provide insights into where their legislation may be headed. But, there won’t be any votes on Thursday. The Council committee will hear the bills and testimony from whomever has been invited or signs up to discuss the legislation, such as business owners and consumers. Then the bills will be laid over in committee, at which point they can be tweaked within the Council, or not, and picked back up for a vote by the committee. If successful in committee, a bill heads to the full Council for a vote.

Both Council members are cautiously confident their bills will move forward for a vote. “I believe we’re going to get this through. It’s a common-sense bill,“ said Cabrera.

Torres slightly hedged his bet. “There’s no telling what will happen in a City Council meeting,” he said, adding, “I see a clear path of passage for the bill.”