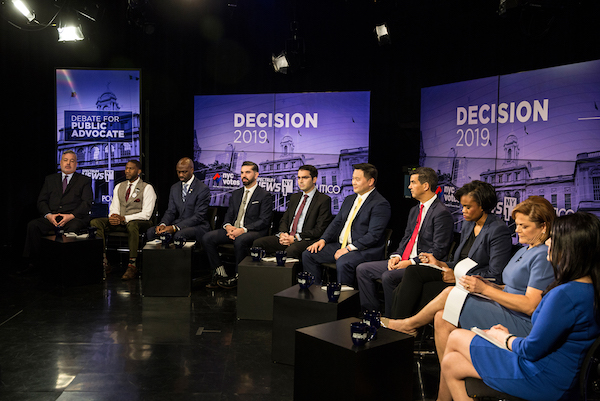 Seven candidates running in the special election for New York City Public Advocate have qualified for the second and final official televised debate, which will take place Wednesday night, just six days ahead of the February 26 election.

There will be 17 candidates on the ballot, 10 of whom qualified for the first televised debate. Now, for the “leading contenders” debate, seven candidates met the threshold set by city law, which includes raising and spending $170,813, according to a spokesperson for the city’s Campaign Finance Board. Candidates made their latest filings to the Campaign Finance Board by midnight Friday.

Of the ten candidates who made the first debate, City Council Members Ydanis Rodriguez and Eric Ulrich and Assemblymember Daniel O’Donnell did not meet the threshold for the second debate.

To make it into the “leading contenders” debate, the candidates then had till February 11 to raise and spend $170,813 and needed to be endorsed by an elected official representing New York City at the local, state or federal level, or by a membership organization with at least 250 members in the city (a labor union or political club, for instance).

Ulrich, the only Republican at the first debate, Rodriguez, and O’Donnell did not meet the financial threshold for the second debate.

At the first debate on February 6, the ten candidates made their pitches to city voters and weighed in on everything from funding for the MTA and NYCHA to the then-happening Amazon deal, and their disagreements with Mayor Bill de Blasio. To qualify for that debate, the candidates were required to show $56,938 in campaign fundraising and expenditure by the filing due just before the debate.

The debate at 7 p.m. on Wednesday (February 20) will broadcast by Spectrum News NY1 and will be publicly accessible on NY1’s website and Facebook page. It will also be simulcast by NYC Life, the city’s media channel. The hour-and-a-half debate will again be moderated by Errol Louis of NY1, with questions also coming from Laura Nahmias of Politico New York and Bobby Cuza of NY1.

The public advocate special election was triggered after the former office-holder Letitia James was elected New York State Attorney General. James filled a vacancy created by the resignation of former Attorney General Eric Schneiderman in the wake of allegations of physical abuse by several intimate partners.

Beyond the ten candidates who made the first debate, the other candidates on the February 26 ballot will be Benjamin Yee, Manny Alicandro, David Eisenbach, Jared Rich, Tony Herbert, Helal Sheikh, and Latrice Walker, an Assembly member who has dropped out of the race but was unable to have her name removed from the ballot.

The election, open to all registered voters across the city, is expected to be low turnout. The winner will hold the seat at least through the end of this year -- there will be a primary election this June and a general election this November to determine who holds the seat for 2020 and 2021.