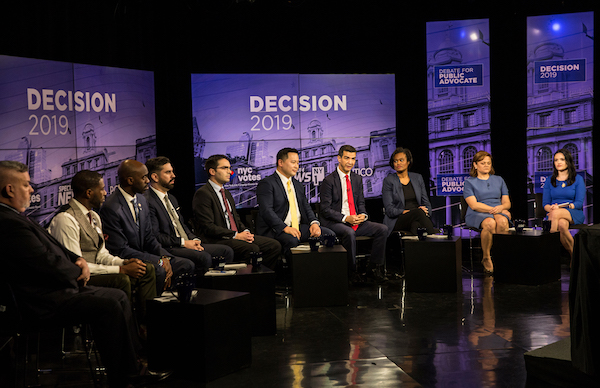 While there were disagreements over the Amazon deal that fell apart and contentious exchanges over their records, the seven candidates for public advocate who debated Wednesday night agreed on a lot, including that Mayor Bill de Blasio should not run for president and instead focus on major challenges in New York City.

With less than a week until the Tuesday, February 26 special election vote, seven of the 17 candidates who will be on the ballot took the stage at Borough of Manhattan Community College for the second of two official, televised debates, broadcast by NY1. The seven candidates -- Nomiki Konst, Michael Blake, Melissa Mark-Viverito, Dawn Smalls, Rafael Espinal, Jumaane Williams, and Ron Kim -- met the financial and endorsement thresholds set by the city’s Campaign Finance Board.

The previous debate, two weeks prior, featured those seven candidates as well as Danny O’Donnell, Ydanis Rodriguez, and Eric Ulrich, the lone Republican and only ardent supporter of Amazon creating a massive campus in Queens among the ten candidates.

After opening statements where candidates reiterated their pitches from prior debates, interviews, and local forums, the first question from moderator Errol Louis had the participants weigh in on the collapse of the Amazon deal, which spurred a lengthy conversation, including prolonged cross-talk at one point, and some of the clearest differentiation of the night among seven mostly left-wing Democrats.

Konst, Espinal, and Kim continued to argue that a deal to bring Amazon’s “HQ2” to the city should not have been pursued, while the other candidates said it should have been done with both better process and outcomes, in some cases talking about the opportunity in more positive terms than they had before the deal fell apart.

There were several tense back-and-forths throughout the hour-and-a-half debate, especially during the “cross-examination” round where candidates each had the chance to ask one opponent a question. That portion repeatedly turned into arguing and, at times, saw the candidate asking a question give a series of attacks before posing their query and the candidate being asked a question deflect by throwing criticism back at the interrogator.

By all measures, Jumaane Williams was treated like the frontrunner that he is widely perceived to be -- several of the other candidates used their questions to target him. Like in the first debate, Mark-Viverito was also the subject of questions and criticism, especially from Konst.

Overall, the candidates largely agreed that Airbnb needs to be strongly regulated but that homeowners should be able to rent out a room here and there, and perhaps even their entire apartments; that the mayor’s housing plan needs to do more for low-income New Yorkers; and that homeless shelters need to be equitably distributed throughout the city. They also mostly agreed that undocumented immigrants should be allowed driver’s licenses and municipal voting rights. On the latter, Mark-Viverito said she almost moved a bill as Council speaker, but that given Donald Trump’s rise to the presidency and anti-immigrant policies, advocates asked her not to move forward.

Like others, Mark-Viverito, a long-time ally of de Blasio who has separated herself from him in recent years, said the mayor needs to focus on running the city, but also said that de Blasio does not really execute unless he’s working on a “pet project” of his own.

Several of the candidates were more shy when asked if they had voted for Williams last year when he ran for lieutenant governor. Four didn’t answer: Konst, Mark-Viverito, Blake, and Smalls. Kim and Espinal said they did vote for Williams, who challenged Lt. Gov. Kathy Hochul in the Democratic primary.

The debate provided candidates a near-final opportunity to pitch themselves directly to voters and to media that might amplify their message. The public advocate is one of three citywide elected positions, responsible for being a watchdog over city government and an ombudsperson, with the power to introduce legislation to the City Council, and some influence over the public pension system. The public advocate is first in line of succession to the mayor if the mayor is unable to finish his or her term.

Konst, an activist and journalist, targeted the city’s wealth gap and called for higher taxes on the wealthy, and said in her opening that New Yorkers should “elect the next progressive millennial woman.” Blake, a member of the state Assembly, mentioned his “jobs and justice” platform and said it’s essential the next public advocate is “independent of the mayor.”

Mark-Viverito touted her career in activism and record as City Council speaker, including her successful pushes toward closing the Rikers Island jails and reforming how low-level offenses are policed and prosecuted in the city. Against attacks from Konst she defended her record on housing, including by citing the “right to counsel” in housing court law that was passed while she was speaker and has helped reduce evictions significantly.

Smalls, an attorney with experience at high levels of the federal government, differentiated herself as the only mother and attorney on the stage. She cited her campaign focus on helping homeless families get into housing. “I have experience breaking through bureaucracy to get results and that’s what I want to do for New York,” she said.

Espinal, a Brooklyn City Council member who previously served in the state Assembly, cited his experience at two levels of government, and ran through a variety of areas where he believes New York is not “livable” enough and he wants to address, including affordable housing and running small businesses.

Williams cited his combination of activism and legislative accomplishments. He touted his work on affordable housing and said the mayor and other elected officials had not fought hard enough to make housing affordable enough for the people who really need it. He attempted to defend himself against attacks from other candidates, particularly as Mark-Viverito again went after him for having staff members and endorsements from several men who have mistreated women.

Kim reiterated that he is against “corporate giveaways” and said that while the Amazon deal may have been stopped by strong activism, there is more work to do to address the larger pattern. He called for passage of his new legislation that would stop New York from engaging in interstate bidding for companies, and said the answer is to build economic development capacity in communities.

In taking a different approach, Williams said he had been in favor of “engaging” Amazon and wanted “to use the power of the city to see if we can change the worst of their behavior” while attaining jobs for New Yorkers. He, Blake, Smalls, and Mark-Viverito all argued there should have been better leadership by the mayor and the governor.

“My criticism of the Amazon deal was always on the process,” said Smalls.

Mark-Viverito said the Amazon deal was deeply flawed because it did not address the city’s two major crises: affordable housing and transit.

“This is not just about process,” Konst argued. “It’s about an exploitative company with a history and track record for decades of increasing homelessness, not being honest in their deals. They should’ve never been welcomed here.”

“Amazon is a super monopoly,” Kim said, “they are an abusive company and the more we engage them, they’re gonna be emboldened. We need to hold them accountable from the beginning and not court them.”

The election is Tuesday and open to all voters across the city. Also on the ballot beyond the ten candidates mentioned earlier are David Eisenbach, Benjamin Yee, Jared Rich, Tony Herbert, Manny Alicandro, Helal Sheikh, and Latrice Walker, though she has dropped from the race.