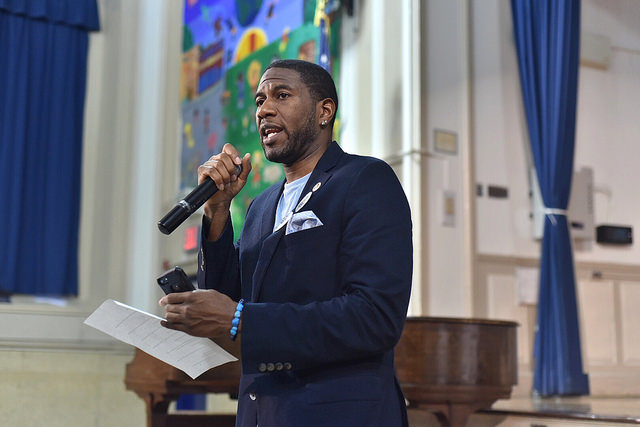 Over the course of his campaign, Williams, a former tenant organizer, made several promises and pitched policies that he said would transform the office of public advocate, which has limited statutory authority or budget but provides a platform for outspoken advocacy.

“This job is not to be adversarial just because. It’s to be a voice for the people,” Williams said at the first of two official televised debates in the short special election, on February 6. He is seeking to make the public advocate more responsive to everyday New Yorkers, he’s said, with the ability to involve communities in city policy rather than see initiatives imposed on the populace from the de Blasio administration’s ivory tower.

Williams top stated priorities for taking on the citywide position are affordable housing, criminal justice reform, improved mass transit, and increased transparency and accountability in local government, whether it be at the NYPD or in economic development deals such as the failed Amazon “HQ2” proposal. He also has said he would focus on transit in the city, pointing the finger on Governor Andrew Cuomo for mismanagement of the MTA.

Rethinking Rezoning and Housing
“New York’s housing crisis is out of control,” Williams writes on his campaign website. “While Mayor de Blasio and Governor Cuomo claim to take this crisis seriously, they do little more than tinker at the edges.”

Williams was among the three Council members who voted against Mandatory Inclusionary Housing, a significant but controversial change to the city’s housing policies that formed the basis for Mayor Bill de Blasio’s affordable housing program launched in his first term. MIH set a new baseline for the inclusion of affordable housing in development projects that receive city permission to build larger than land use rules would otherwise allow. It was heralded by de Blasio and most Council members as historic and trend-setting, but Williams believes it did not go far enough.

Throughout the public advocate campaign, Williams has continued to criticize MIH and called for fixing the policy to incorporate deeper housing affordability. “Housing is the number one issue,” he declared at the first debate.

Williams has promised to push for three bills that he had already introduced before the Council -- one to place a moratorium on neighborhood rezonings, which the mayor has pursued in several low-income communities of color; a bill that would mandate a racial impact study before any rezoning; and a third one to end the city’s third-party transfer program, which has led to what many call deed theft of the homes of low-income residents of color.

He has also promised to push for a 15 percent of units set aside for homeless individuals in housing projects that receive city funding and to end the sale of public land to private developers.

The scandal-plagued and financially ailing New York City Housing Authority (NYCHA), home to nearly half-a-million New Yorkers, also loomed large in the public advocate’s race and Williams promised to investigate the work of NYCHA home inspectors and living conditions in developments. Though the authority has also been the subject of multiple lawsuits, including one by the federal government that was settled with the city, Williams has also pledged to sue the authority over what his campaign termed a breach of human rights.

Deputies in the Boroughs
Williams has promised a more ground-up approach in the public advocate’s work, emphasizing at the second televised debate of the race on February 20, “The problem this administration has is it too often tries to do things to people. We have to have someone that’s gonna try to do things with people.”

"I want to reorganize how the public advocate office works," Williams said on the Max & Murphy podcast. He said he would set up satellite offices in the boroughs that have a high number of complaints filed with the Civilian Complaint Review Board, which investigates police misconduct, with a deputy public advocate stationed at each one to more closely track problems at their source.

Subpoena Power
Williams has said he will introduce legislation to give the public advocate the power to subpoena city agencies for records, which would help him perform the duty of “charter cop” that he said is an essential role for the office, referring to the city charter, its foundational government document.

Williams also wants the ability to be able to vote on legislation before the City Council. The public advocate can introduce legislation to the Council, but does not have a vote.

All the candidates, including Williams, generally agreed that the office needs more resources and should have an independent budget that is not subject to the whims of the mayor or the City Council.

Williams told Max & Murphy that several agencies aren't living up to expectations in his view and need more scrutiny. He named agencies dealing with housing, policing, and health care, among others.

Fossil Fuel Divestment
Williams has called for the city to divest its public pension money from fossil fuels and, as public advocate, would be one of the trustees of the city’s multi-billion-dollar pension fund. His position would allow him to advocate for divestment, a position that his predecessor also supported.

Police Transparency
As a longtime critic of the NYPD, Williams has pushed for policing reforms, and for greater transparency and accountability in police disciplinary procedures. He was one of the architects of the Community Safety Act, passed over a veto by Mayor Michael Bloomberg, which cracked down on discriminatory policing and imposed an inspector general on the police department.

Williams has been vocal about the need to repeal section 50-a of the state civil rights law, which prevents officer disciplinary records from public disclosure. He has vowed to continue that advocacy from the public advocate’s podium.

Marijuana Legalization
Williams introduced the Marijuana Reform Act at the City Council, which would prohibit employment discrimination, as well as against license applications, by city agencies based on marijuana-related arrests and convictions. He favors legalization of adult-use marijuana but wants tax revenue reinvested in communities that have been most harmed, as he puts it, by racially-biased law enforcement of drug laws.

Election Reforms
Williams has supported instant-runoff voting, also known as ranked-choice voting, which gives voters the ability to choose candidates by preference and distributes second-choice votes if no single candidate meets the required threshold to claim a victory. The system is designed to prevent costly and laborious runoffs like the one held for the public advocate’s seat in 2013. Williams has also said he’s supportive of nonpartisan elections.

Municipal Control of the MTA
At the first debate in the race, when the ten candidates on stage were asked if the mayor should have control of the city’s subways, Williams only half raised his hand. Though he agreed that the city should increase its contributions to MTA capital funding, he said it should come with a “commensurate amount of control” for the city. Currently, the mayor controls 4 of 17 appointments to the MTA board, which Williams said should be increased. But, he said mayoral control wasn’t ideal since, in his opinion, it hadn’t worked well for the school system. Instead, he said he’d like to see “municipal control” which also gives the City Council the ability to have a say.

Education
Williams attended Brooklyn Technical High School, one of the city’s specialized high schools where Mayor de Blasio wants to diversify the student population by scrapping the Specialized High School Admissions Test (SHSAT). But Williams has taken issue with the mayor’s plan, which critics say would pit different racial and ethnic groups against each other, taking away seats from Asian-Americans to improve representation of blacks and Latinos. “This is an issue about access points,” Williams said at the first debate, emphasizing that the city should be looking at multiple criteria for admissions and evaluating the entire Department of Education.

Williams has also called for fully funding the state appeals court’s Campaign for Fiscal Equity decision, which would require the state to allocare billions more in the budget for struggling schools. CFE funding has been a perennial issue at the state level and Governor Cuomo has sought to change the funding formula this year. As public advocate, it’s likely that Williams will be among those on the frontlines fighting those efforts as the state budget deadline nears.

The Amazon Deal
Williams was among the elected officials who signed a letter urging Amazon to choose New York City as the home for its new HQ2 campus. But once the deal was announced by Mayor de Blasio and Governor Andrew Cuomo, Williams called it a “debacle” and said it should be quashed. At the second debate, which took place shortly after Amazon scuttled their plans to move to Long Island City, Williams explained that he took issue with the secrecy of the deal and that he would be “derelict” if he had refused to engage in conversations to create between 25,000 and 40,000 jobs in the city. “We should applaud and be thankful that people’s voices were heard but we should lament the fact that we didn’t have an honest discussion,” he said.

He said he would advocate for the passage of Council Member Brad Lander’s bill, which he has co-sponsored, to ban non-disclosure agreements for economic development deals, like the NDAs that Amazon had required elected officials to sign.

Small Businesses
Williams has supported the Small Business Jobs Survival Act, which is meant to commercial tenants the right to renew their leases and prevent the closure of small businesses from exorbitant rent hikes. Recent versions of the bill have languished for more than a decade in the City Council but it has picked up momentum under Council Speaker Corey Johnson -- a hearing was held in October for the first time in ten years.

This article has been updated to add several other Williams positions expressed during the campaign.