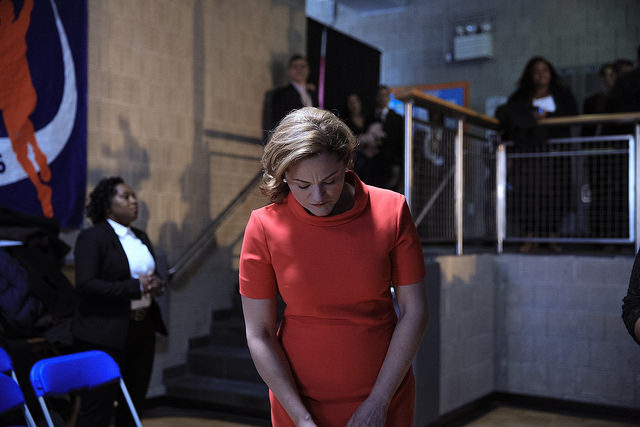 Former Speaker of the New York City Council Melissa Mark-Viverito lost her bid for public advocate in the special election held Tuesday, as Brooklyn City Council Member Jumaane Williams came out on top of a crowded field of candidates to claim victory by an unexpectedly wide margin. Mark-Viverito came in third behind WIlliams and City Council Member Eric Ulrich, the lone Republican elected official in the field of 17 candidates. It was the first-ever nonpartisan citywide special election in New York City, decided by an expectedly low turnout of voters.

At her election night party at the London Irish Pub in East Harlem, part of the district she represented for three terms in the City Council, Mark-Viverito claimed credit for influencing the issues in the public advocate campaign, while acknowledging she had come up short. “[I]n this campaign, we helped change this city in so many important ways,” she said, touting her push for improving the MTA, her advocacy for residents of public housing, her call for taking ICE out of the state’s courts, and spotlighting the lack of diversity in city leadership.

On that last point, she seemed most disappointed. “I don’t see myself as a woman reflected in this city right now, and that is troubling,” she said, noting that the three other offices with citywide responsibilities are currently held by white men (Speaker Corey Johnson is the acting public advocate until Williams is sworn in), including Mayor Bill de Blasio and Comptroller Scott Stringer.

Mark-Viverito encouraged young women to run for elected office, an effort she herself has supported through the 21 in 21 campaign to elect 21 women to the City Council in the 2021 municipal elections.

Mark-Viverito could attempt another shot at the public advocate’s seat in the coming months. Under the City Charter, the winner of the special election must defend the seat this year, first in a party primary in June if a challenger emerges and then in the November general election, to serve the remainder of the term that runs through 2021. Letitia James was elected attorney general this past November, creating the public advocate vacancy just one year into her second term in the post.

Mark-Viverito did not indicate on Tuesday whether she would seek the primary nomination for public advocate against fellow Democrat Williams, and she refused to take questions from reporters at her event. She did say she had spoken to Williams but she didn’t reveal what she said.

In a strange twist, ballot petitioning for the June primary began on Tuesday, as voters went to the polls in the special election. Candidates will have to submit signatures by April 4 to get on the June ballot.

Mark-Viverito was one of the leading candidates in the race and had the highest level of experience in city government. She served three terms in the City Council, representing District 8 which covers East Harlem and the South Bronx, before being unanimously elected speaker for her final term, becoming the first Latina to occupy the post. She was also one of only four women on the special election ballot out of 17 candidates, though one of them, Assemblymember Latrice Walker, withdrew from the race weeks ago. Mark-Viverito emphasized that imbalance throughout, and was endorsed by several women’s groups.

As speaker, Mark-Viverito had often faced criticism for being too friendly to Mayor Bill de Blasio, who helped her get chosen to lead the 51-member legislative body. But just as she did as her tenure progressed, she spent the public advocate campaign distancing herself from her once-ally in the progressive movement. She pointed to instances when she broke with de Blasio, particularly her push for closing the Rikers Island jail complex, which the mayor eventually adopted and put into motion. She also heralded the Criminal Justice Reform Act, which effectively decriminalized several low-level offenses such as drinking alcohol in public and public urination, despite heavy initial opposition from de Blasio and the NYPD.

Mark-Viverito’s campaign made mass transit a top priority, as was clear from the “Fix The MTA” party line she created for the purposes of the nonpartisan election, but she also focused on housing and homelessness, immigrant rights, health care, and education. She largely touted her legislative accomplishments as speaker, which is effectively a citywide position in scope and authority, and promised to continue her unreserved advocacy from the public advocate’s bully pulpit.

But those efforts were in vain, at least in terms of the results on Tuesday. While Mark-Viverito has been rumored as a possible 2021 mayoral candidate whether she were to win or lose this special election, she’ll first have to decide whether to run in the primary set to take place June 25 and try to win the public advocate seat that eluded her this time.