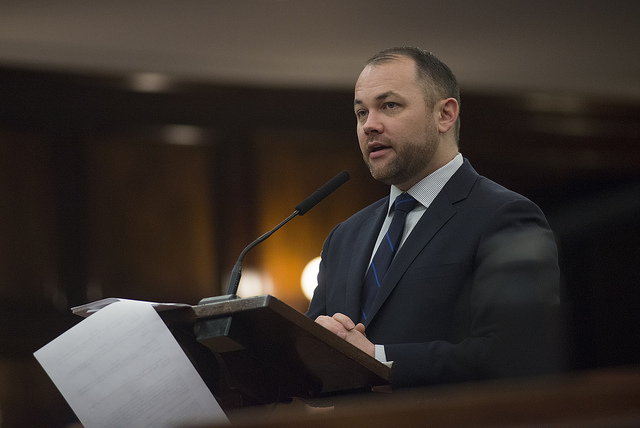 The New York City Council’s Democratic conference held on Thursday what officials said was its first ever public vote to appoint three new commissioners to the New York City Board of Elections.

The BOE is a quasi-city agency, funded in the city budget but governed by state law. It has ten commissioners -- two from every borough, with one each recommended by the Democratic and Republican parties and appointed by the City Council for four-year terms. The board’s executive director is chosen by the commissioners.

Both Taylor and Townsend will replace commissioners whose terms have already expired and who have been serving as holdovers for more than two years. Townsend will replace Commissioner Alan Schulkin, who was once caught on a hidden camera suggesting that New York City’s municipal identification program would exacerbate what he claimed was a problem of rampant voter fraud, of which there is no documented or even anecdotal evidence. When former Speaker Melissa Mark-Viverito attempted to confirm her preferred candidate for Schulkin’s seat in 2017, the Council was sued by the Manhattan County Democratic Party, which had nominated a different candidate. The Party dropped the lawsuit after Johnson became speaker and both the candidates previously sought were sidelined for Townsend.

The three appointments on Thursday were the first made by Johnson under his speakership and the Democratic conference used the opportunity to push the appointees on several reforms in elections processes and the BOE’s internal culture. The BOE has had a checkered history of administrative failures, most visible during several mismanaged elections in the last few years. Critics have often blamed the board’s patronage hiring process for some of those mistakes while others blame the state’s arcane and immensely complex elections and voting laws.

The central point of tension with the City Council has been the Board’s refusal to abide by local legislation, claiming that the Council does not have the jurisdiction to mandate any changes to election administration and that only the state Legislature can force its hand. That tension has played out in various ways in recent years. The Council passed bills allowing online voter registration, mandating the creation of a voter information portal, and a more simple bill that would require the BOE to post signs when a poll site has been moved. The BOE has declined to implement all of them.

To push those reforms ahead, the Council Democrats asked the three commissioner candidates to fill out questionnaires pledging support for those changes and also asking them to make merit hires rather than patronage ones. They also asked the commissioners to agree to allow the BOE executive director to unilaterally hire and fire employees rather than having to obtain permission from the commissioners. All three candidates agreed to the pledge, according to Speaker Johnson and other Council members.

There was some pushback from Camilo, the Bronx candidate, over the language of the questionnaire, Bronx Council Member Andy Cohen conceded when asked by Gotham Gazette. (Camilo’s appointment was not included on the agenda on the Council’s legislative calendar on Thursday morning that mentioned the other two appointments. It was added before the vote took place sometime before noon.)

But Cohen emphasized that Camilo agreed with the concept of the reforms but could not answer in a way that would contravene her duties as mandated by state law. “There are many, many frustrations as a City Council member of where the state has local control that I think is unnecessary, intrusive,” Cohen said in the Council chambers after the vote. “I think that if the city had control of its own Board of Elections, there’s no doubt in my mind we could do a better job.”

Manhattan Council Member Ben Kallos, who has long advocated for reforms at the BOE, said the Council’s public vote was “a good step in the right direction.” Kallos was the author of some of the reform bills that formed the basis for the questionnaire to the appointees. “For a long time I’ve been asking the Board of Elections to voluntarily do the right thing and it doesn’t matter if the law says they can get away with patronage, we need to live in a post-patronage world where people are hired based on what they know, not who they know.”