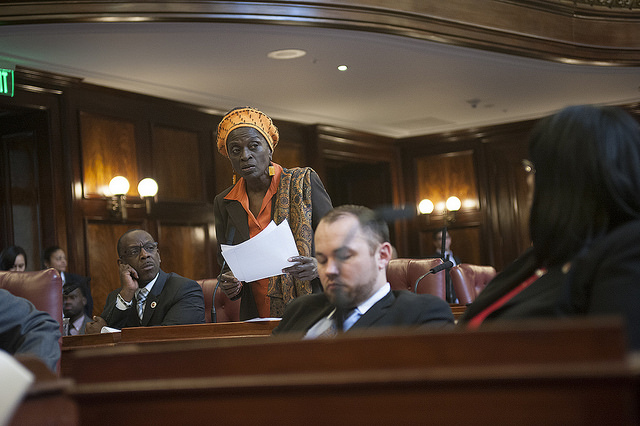 City Council members on Thursday questioned administrators for the City University of New York as part of a preliminary budget hearing regarding the public university system, which is funded through a variety of sources including city, state, and federal dollars, as well as tuition.

The hearing was helmed by Higher Education Committee Chair Inez Barron, who represents parts of Brooklyn, is a Hunter College graduate and former public school teacher, and has long argued that CUNY should be tuition-free for all students.

The hearing touched on various issues that have been associated with CUNY for years, such as the increased use of adjunct professors in the system, potential for new hiring, and the role CUNY plays as a vehicle for upward mobility.

The total CUNY budget request for this coming fiscal year, from all sources, is $3.9 billion.

“In my opinion, I’m opposed to annual tuition increases,” Barron said. “We’re glad that community college has not had to bear that brunt. And my objective is to make CUNY tuition-free. That’s my objective.”

At Thursday’s hearing, CUNY administrators said that if a requested increase in state funding of $250 per student “full time equivalent” is not provided, the community colleges may have to unfreeze tuition rates.

Mayor de Blasio’s preliminary budget, released in February, calls for $1.181 billion for CUNY in fiscal year 2020, which begins July 1 of this year. This is a decrease from the $1.196 billion in the adopted budget for the current fiscal year, and includes a $14 million cut for community colleges specifically, from $1.143 billion to $1.129 billion.

For community colleges, labor costs will grow by $16 million, from $792.2 million to $808.6 million, due to collective bargaining agreements, while the “other than personal services” allocation shrinks from $350.9 million to $320.1 million, mainly from a $34 million cut to the budget for “supplies and materials,” according to a City Council report.

The mayor’s preliminary budget also includes appropriations for senior colleges ($35 million) and for the public K-12 schools on Hunter College’s campus ($18.2 million). Both of these are essentially flat from the current budget. The rest of CUNY’s budget comes from the state, the federal government, student tuition, scholarships, and grants.

The CUNY administrators present highlighted several key areas they hoped the Council would help fund, including expansion of the successful Accelerated Study in Associate Programs (ASAP) initiative, efforts to address student food insecurity, and expansion of CUNY’s childcare program, which is not present at every school.

The administrators also called for the Council to help significantly increase funding for CUNY’s associate programs, funding for which has remained flat for over 20 years, by matching the funding to inflation. That would double the programs’ funding, from $32.3 million to $65.1 million.

Over the next four years, CUNY wants to hire 800 new full-time faculty, an attempted departure from the adjunctification trend in at its schools and across higher education. CUNY’s labor force now counts 7,600 full-time instructors and 13,000 adjuncts, who make as little as $3,200 per course, do not have job security, and often have to teach multiple classes per semester at different schools just to make a meager living.

The Professional Staff Congress, a union that represents full-time and part-time CUNY instructors, is aiming to both lessen the university’s reliance on adjuncts and double adjunct pay per course.

“If you take the $3,200 minimum pay per course, and divide that by the number of hours it takes to actually teach a course, grading, preparing, meeting with students, responding to their emails, counseling, the actual pay works out to be just about minimum wage or lower,” said Barbara Bowen, the president of PSC. “So for people with PhDs, master’s degrees, teaching the next generation of college students, responsible for conveying to them the message that if you finish your college degree, a good future awaits you, that very person who has a college degree and a couple of advanced degrees is making less than minimum wage. There is something very wrong about that.”

Among those who attended and asked questions other than Barron were Council Members Ydanis Rodriguez, Robert Holden, and Ben Kallos.

On the capital front, major renovations at several colleges, many of which consist of old and somewhat neglected buildings, are included in the mayor’s preliminary capital plan for fiscal years 2019-2023, including $5.9 million in city funding for a major renovation at Hostos Community College in the Bronx. Not included, but requested, is $50 million for a permanent home for Guttman Community College in Manhattan, CUNY’s newest institution.