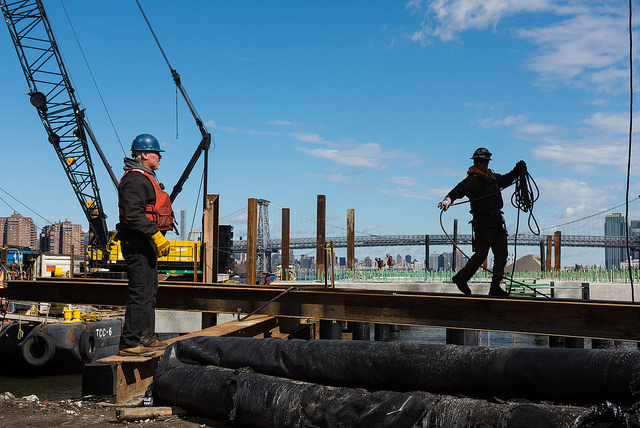 Many New Yorkers know the city has trouble completing construction projects on time and under budget. Projects like school renovations and the build-out of park facilities are capital projects, the subject of increasing scrutiny and some reform, with more promised, as frustrations persist and residents, watchdogs, lawmakers, and other city leaders seek answers.

Top officials from the administration of Mayor Bill de Blasio to City Council Speaker Corey Johnson to Comptroller Scott Stringer have taken a fresh interest in improving the capital projects budgeting and delivery processes. The mayor’s office has released several plans promising to do just that. After forming a new subcommittee on the capital budget last year, the City Council has proposed reforms and Council members have been critical of the city’s handling of capital spending during this month’s annual budget hearings.

There are some areas of agreement among the parties involved, but it is currently unclear if there will be any major substantive changes to the current system, wherein the city’s long-term capital budget planning is lacking in transparency and widely seen as unrealistic, and projects are consistently falling behind schedule and over budget.

Much of the recent attention has come through this year’s city budget process. As part of the reviewing the preliminary expense budget put forward by Mayor de Blasio, the City Council also assesses the preliminary capital budget for next fiscal year as well as the ten-year capital strategy.

At the first preliminary budget hearing of this cycle, Melanie Hartzog, the city’s budget director, said that the top priorities for capital projects over the next decade would be education, environmental protection, housing, and transportation.

In two recent hearings and several recently-released plans, city officials have promised to address many of the long-standing issues associated with capital project delivery, including planning, process, and transparency.

“We have doubts,” said Council Speaker Corey Johnson, a Manhattan Democrat, at the Council’s initial budget hearing. Johnson and other Council members raised several issues about the capital budget and the ten-year plan. He said that the latter half of the ten-year plan “does not take into account the city’s needs,” including both its current commitments and new needs that will arise.

Multiple Council members brought up that the ten-year plan does not include any new school construction after fiscal year 2024. Council Member Vanessa Gibson, a Bronx Democrat and chair of the capital budget subcommittee, called this “unrealistic planning” and noted the city’s history of frontloading its ten-year capital plans.

Gibson specifically cited the budget planning for the NYPD’s capital needs. The current proposal allocates $850 million in capital spending for the first three years of the plan, and only $160 million in the next seven. Hartzog acknowledged the history and said that the city is working to improve. Council members did acknowledge some progress in clarity for what is outlined.

In addition to problems with planning, capital delivery from conception to completion has its own set of obstacles. Recognizing the past-due and over-budget trend, the city’s Department of Design and Construction earlier this year released a strategic blueprint that promises to “fundamentally reevaluate the status quo in City capital project delivery.”

As of the time of the report’s release, DDC was managing 834 active projects valued at $13.5 billion. Since 2004, the annual capital budget has grown by $1 billion to $3 billion each year to keep pace with a growing city, which has also added nearly a million jobs in the same period. DDC deals with most city capital projects outside of the School Construction Authority, which is its own entity dealing with its eponymous subject matter. SCA is known to be far more successful in its planning and delivery than DDC.

The blueprint identifies three internal and external impediments within the delivery process, including DDC’s own business practices, burdensome procurement process rules, and the engineering challenges that come with underground infrastructure that “all complicate efficient delivery of capital projects” in the city.

The report also identifies climate change as a necessary factor to consider in all future planning. Capital projects need to both protect the city from rising sea levels and natural disasters as well as minimize the city’s contributions to global warming, according to the report. The agency is under relatively new leadership as it embarks on this ambitious plan. Mayor Bill de Blasio appointed Lorraine Grillo, who has also continued leading the School Construction Authority, as the new DDC commissioner last July. Grillo has been widely praised for her leadership of SCA, including by City Council members, though the city continues to struggle with school space in many neighborhoods.

DDC is currently undergoing an agency-wide review of its practices and external challenges. Through this review, DDC promises to “modernize how we do business.” These modernizing reforms include standardizing project initiation, managing projects more effectively, enhancing management capacity, and updating internal systems and technology. The plan promises to better identify and prioritize needs, streamline procurement, and restructure contracts to promote meeting deadlines, among other improvements.

Contracts and contractor diversity are also a primary concern for the mayor’s office and the Council, they say. DDC wants to get more out of its contracts and diversify and expand the pool of applicants. Daniel Steinberg, the Senior Advisor to the Mayor’s Office of Operations, said that many minority- and women-owned business do not apply for contracts because of the city’s history of untimely payments. This can also dissuade newer and smaller businesses from participating in the bidding process. Timely payment of contracts is a larger issue that DDC is also seeking to address.

The City Charter mandates certain reporting on the process to the Council and the public, but Council Member Gibson said these reports “often do not relate to one another or the city’s real spending in a meaningful way.” The two bills, which had the support of the Council members present at the hearing, are intended to address these issues. Gibson said that the proposals would give the Council and public “a wholistic and detailed look at all capital projects that are in progress throughout the city.”

The first, Intro. 32, sponsored by Council Member Andrew Cohen, a Bronx Democrat, would require city agencies to provide electronic notification of any delays or cost changes for capital projects. This is very similar to one of the charter revisions that Comptroller Stringer is proposing. The second, Intro. 113, sponsored by Council Member Brad Lander, a Brooklyn Democrat, would create a database to track citywide capital projects. Finance committee chair Daniel Dromm, a Queens Democrat, said that “transparency in the capital process is key to providing assurances to the public that city resources are being put into good use in an efficient and effective manner.”

While most of the hearing focused on these two bills, it was clear that the Council members had larger issues in mind and thought of the bills as first steps to larger-scale reform and improvements.

Steinberg, of the Mayor’s Office of Operations, said during the hearing that his office agreed with the two bills “in spirit,” but was concerned with components of each bill that he would consider to be “impractical.”

He voiced concern that Intro. 32 would require reporting for all capital projects, which includes everything from equipment acquisition (such as of paper shredders) to building or repairing massive water tunnels. In regards to Intro. 113, he said that it “would be incredibly burdensome to implement while providing little new information.”

Intro. 32 currently has ten Council sponsors, while Intro. 113 has 35 sponsors, well above the threshold required for passage in the 51-seat Council.

Nonprofit watchdog Citizens Budget Commission submitted testimony in support of Intro. 113 at the February hearing, saying that “the capital budget is just as important as the operating budget and should be subject to the same monitoring and scrutiny.” Gibson brought up the bills again at the initial preliminary budget hearing.

The two bills are focused on transparency in the capital projects process, but the sponsors and other Council members also contextualized the proposals as necessary for the eventual improvement of the entire system and not a distinct issue of bureaucratic transparency. During the hearing, Cohen said that “the inability of the city to deliver on capital projects is an epidemic.”

Council members frequently expressed their personal frustration with the process and the length it takes for many capital projects to be completed, some spanning multiple Council member terms. Cohen, who is in his second term, said that he “spends a significant amount of my time on projects that were funded by my predecessor.” Gibson similarly expressed frustration over parks projects commonly taking as long as eight years to complete, which presents an oversight challenge to Council members, who are term-limited to eight years in office over two terms.

A source of frustration for Council members was that only capital projects costing $25 million or more are required to be reported on the capital projects dashboard, a publicly-available transparency tool on the city’s website. Capital projects of that size account for only 300 of the over 10,000 ongoing projects for a year. Steinberg said that the Mayor’s Office of Operations would be open to expanding the scope of the dashboard’s reporting to be more inclusive than the current threshold. After learning that the city does not have an employee assigned specifically to data entry for the dashboard, Gibson said that it was evidence that capital projects transparency “is not a priority in this city.”

Another area of agreement between the Council and Comptroller is the need for individual budget line items for each capital project. This proposal was one of Stringer’s suggested charter revisions and Gibson brought it up at both recent Council hearings pertaining to the capital budget. Stringer is also proposing that the city regularly report on the condition of capital assets, a requirement he wants added to the charter.