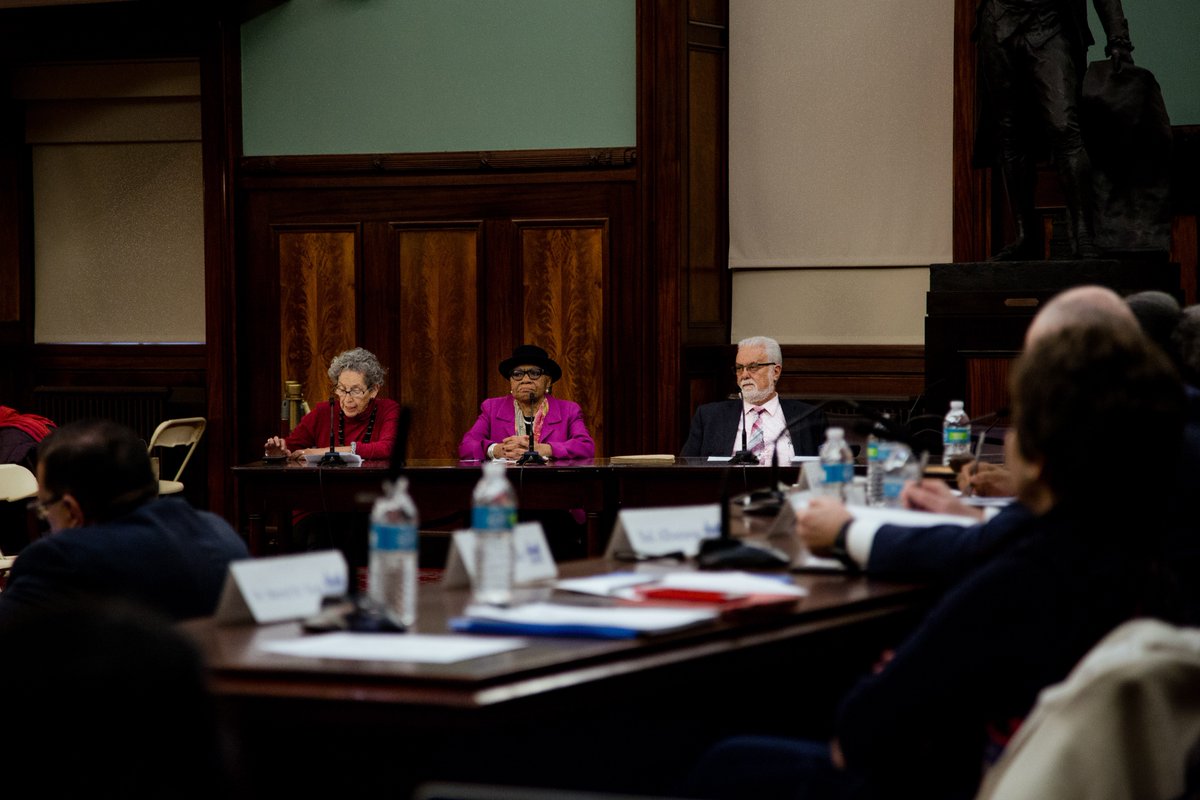 Over the course of three hours on Monday evening, the 2019 New York City Charter Revision Commission held the last of seven “expert” forums, during which commissioners heard testimony from former and current city officials, academics, and activists about the role of borough presidents, general city governance issues, the Board of Standards and Appeals, and the Landmark Preservation Commission.

The commission was created to update New York’s charter: the city document that determines government structures and procedures, allocating power throughout. The 2019 commission appears set to make the most drastic changes to the city’s charter since a major overhaul by the 1989 commission. Created through City Council legislation, it is composed of 15 commissioners appointed by city leaders – four by the Mayor, four by the Speaker of the City Council, and one by each borough president, the Public Advocate and the Comptroller.

After holding a series of public hearings and private deliberations, the commission determined broad focus areas to continue to examine. Then, the commission has held expert forums on election reform, police accountability, city budgeting and contracting, conflicts of interest and appointing chief diversity officers, the power of the public advocate and the role of the law department, and land use and city planning.

On Monday, the hearing revolved around the power of borough presidents and borough representation throughout various city commissions.

Role of Borough Presidents
The first panel of the evening was composed of two former borough presidents, Ruth Messinger and Virginia Fields, as well as borough advocate and activist Allen Cappelli.

They all agreed that the charter should strengthen the role of the borough president, especially in terms of legislative power. They argued that borough presidents should have more input in the city’s discretionary budget, more power in terms of land use and redistricting, more transparency and communication among the mayor’s office, the City Council, and borough presidents, and more authority in appointing commissioners for the various city commissions.

On the other hand, later panelists argued against giving the borough presidents the authority to choose people to be on specific commissions.

Commissioner Sateesh Nori questioned if giving the borough presidents more power was moving in the right direction. “The way people identify with their boroughs as we move away from 1898, they look to be residents of New York City as a whole. What is the role of the borough president if that is what is happening?,” she asked. Panelists argued that people do in fact associate themselves with their home borough.

“I don’t think I agree with that premise. I worked in all of the boroughs and they have their own identities,” responded Cappelli. The panel also argued that there is a difference between representing the borough and the way people identify.

General Governance
The general governance panel became far more of a discussion than planned, covering a variety of topics and several proposals made by the professors who testified, all of whom had past experience in city charter revision work.

The conversation involving Ester Fuchs of Columbia University, Eric Lane of Hofstra University, and John Mollenkopf of the CUNY Graduate Center touched on the role of the borough presidents, but also touched on the role of the public advocate, the question of establishing a budgetary “rainy day fund,” fair share requirements, the city’s corporation counsel, community boards, open primary elections, the ability to remove the chief of the Department of Investigation, and prior charter revision efforts.

Fuchs, who worked for Mayor Michael Bloomberg and chaired the 2005 charter revision commission, was the most vocal, putting forward five precise proposals.

She called for instituting open primary elections, which would allow voters to cast a ballot in any one party primary they choose, regardless of their actual party affiliation. This proposal was discussed in detail. Commissioner Sal Albanese agreed with Fuchs on open primaries, but proceeded to question the role of public advocate. “I could never wrap my arms around the position since 1989,” he said. “If the Public Advocate is really a procedural structure and we don’t give it any more power, why do we keep it?”

“It served a purpose in 1989. From a governance point of view, it doesn’t have governance purpose. It emphasizes the wrong things that people should do in order to be mayor,” said Fuchs. She also called for the public advocate to manage a citizen survey of 130,000 randomly selected New Yorkers on a series of services.

Fuchs also called for the establishment in the charter of a “rainy day” fund, something that would require state approval, as discussed during a prior charter hearing on budgeting.

Lastly, Fuchs argued that the removal of the investigations commissioner should require approval by the City Council, which confirms the mayor’s nominee to the post, and not the mayor alone.

Mollenkopf is against increasing the power of borough presidents. He argued that the power was well-balanced with the City Council and the mayor, and said the charter revision of 1989 produced powerful mayors then held accountable for their actions. Mollenkopf said the borough presidents and public advocates should maintain their same roles and proposed a survey on how the City Council impacts New Yorkers’ day-to-day lives.

Lane, who helped lead the 1989 charter revision effort whereby the position of public advocate was created, said that city leadership has at times slashed the public advocate office budget, thus limiting its role. He also said the fair share standard needs to be examined and be “given more teeth,” and said it is a good way to fight homelessness in the city. He also proposed taking a closer look at the corporation counsel, which is basically the city’s top lawyer.

Board of Standards and Appeals (BSA)
A panel composed of a current board member, Margery Perlmutter, a former chair of the board, Meenakshi Srinivasan, and the former Division Chief of Administrative Law for the Corporation Counsel, Gabriel Taussig, discussed the composition and role of the Board of Standards and Appeals, which interprets the meaning of the city’s zoning resolution. According to its website, the board reviews applications for variances and special permits, as well as appeals from property owners whose proposals have been denied. It also reviews applications from the Department of Buildings and Fire Department to modify certificates of occupancy.

The mayor selects the five board members on the BSA. A proposal submitted to the charter revision commission requests borough presidents to have a say in appointing board members. However, the consensus amongst the panel of experts was that no changes should be made to the charter concerning the BSA.

The panelists felt that the task of finding skilled board members -- for example, a highly qualified engineer -- who is willing to work for lower government wages would be a complicated process for borough presidents. The charter already stresses that there may be no more than two people from a single borough on the BSA, so there is already reasonable representation. Srinivasan also defended the BSA’s procedure. “It takes input from community boards,” she said.

Landmarks Preservation Commission (LPC)
The LPC is responsible for identifying architecturally, historically, and culturally significant buildings to give “landmark” or “historic” district status and preserving them. Panelists involved with the LPC made the case for paying landmarks preservation commissioners a stipend and insisted that the mayor continue to appoint the 11 commissioners on the LPC, while other elected officials continue to have no say.

Panelist Peg Breen, speaking on behalf of New York Landmarks Conservancy, argued that LPC commissioners spend too much more time going to hearings than when the commission was formed. “Stipends would recognize the important service commission members perform,” she said. However, charter commissioners said stipends might create a conflict of interest for LPC commissioners who have other jobs.

The LPC panel argued for the mayor to continue to appoint commissioners to ensure that the public knows who to hold accountable. “The charter already requires commission members from each borough,” said Breen. “Mayoral control maintains clear accountability.”

Note: this article has been corrected to indicate that Fuchs worked on the 2005, not 1999, commission.