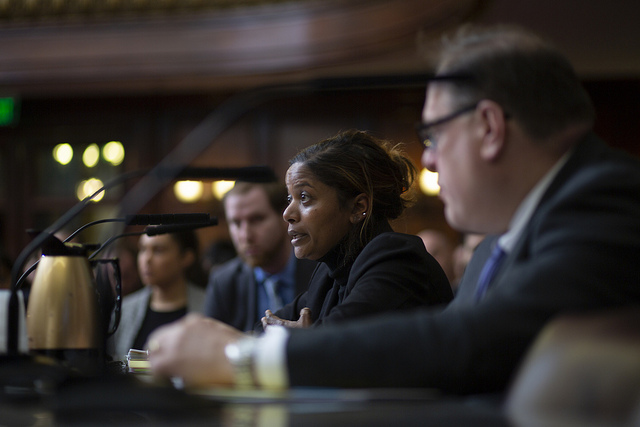 As usual, the City Council’s March agenda was mostly dominated by preliminary budget hearings, evaluating the mayor’s initial spending plan for the next fiscal year, which begins July 1. This stage of the city budget process started and finished with a general hearing held by the Council’s Finance Committee, along with its Capital Budget Subcommittee, with a series of more specific agency- and service-related hearings in between.

The preliminary budget hearings finished where they began, with Council Speaker Corey Johnson, a Manhattan Democrat, and other Council members looking for more details about cuts and efficiencies the administration of Mayor Bill de Blasio plans to make across city agencies. When he presented a $92.2 billion preliminary budget in early February, de Blasio said he was instituting a $750 million PEG (program to eliminate the (budget) gap), the first PEG of de Blasio’s tenure, during which a very healthy economy has allowed the mayor and Council to increase spending very quickly, while also keeping reserves fairly high.

But where will that $750 million come from? De Blasio and his top budget officials said they would give each agency, from the NYPD to the Department of Education, targets to meet and there would be more detail by the mayor’s executive budget, which is due toward the end of April. Yet City Council members want more detail now.

The PEG was brought on, the mayor said, because the city’s recent revenue collections have not met the Office of Management and Budget’s growth projections. The city collected $46.5 billion in revenue for the previous fiscal year, which was a 1.2% increase from the year before. However, OMB had forecasted a 2.6% growth rate.

At the City Council’s final preliminary budget hearing, Jacques Jiha, the commissioner of the Department of Finance (DOF), attributed this to the “weakness” in personal income tax collection (especially senior payments) and the “softness” of unincorporated business tax collection. Jiha also noted the recent inversion of the bond yield curve, which could signal a potential recession, as another sign that “the budget should be approached with caution.”

City budget director Melanie Hartzog later echoed Jiha’s cautionary tone, highlighting three “economic risks” that led to the PEG. She clarified -- and repeatedly stressed -- that OMB and economists are forecasting an “economic slow-down,” not a recession, amid a national economy that has appeared vulnerable in recent years. Still, she called such a slow-down “a substantial threat to the budget.” Second, she also attributed the slowing of city revenue growth to a decline in income tax collections, noting recent changes to the federal tax code.

Finally, Hartzog also discussed OMB’s expectations that state and federal contributions to the city budget would decline. According to Hartzog, the mayor’s executive budget will include cuts to health care and education programs unless the city can secure additional funding from the state. Also, while President Trump’s budget proposal would be detrimental to the city, OMB does not believe that it will pass through Congress. Hartzog said OMB would work with the city’s congressional representatives to secure federal funding.

Council Finance Chair Danny Dromm, a Queens Democrat, said that he hoped Hartzog’s testimony would answer questions that came up in previous budget hearings over the past month. Speaker Johnson summarized the previous month’s hearings by saying that “most agency heads were unwilling or unable” to discuss what would be affected by the city’s $750 million PEG. When Hartzog said that these details would appear in de Blasio’s executive budget, Johnson said that he was “incredibly frustrated to be stonewalled.”

Many questions that Council members had at the first preliminary budget hearing still went unanswered at the final preliminary budget hearing. Hartzog said that it was “too early in the process” for the Council to be given details about what particular cuts will be made at each agency. Agencies have submitted their preliminary drafts for savings, but the OMB still has to review those proposals. Similarly, Hartzog could not yet answer what percentage of the cuts would affect services and programs.

Dromm said that cuts to programs such as summer employment for students and adult literacy “will be a non-starter.” Johnson agreed that the Council would not support cuts that would affect “vulnerable New Yorkers.” He warned Hartzog, “I don’t want a level of game-playing” over cuts and said that it would “be a big waste of time.” Hartzog said that “neither I nor the mayor want to play that budget dance.”

When asked if she was confident that the city’s reserves would be able to prevent budget cuts to programs during a potential recession, Hartzog reiterated that economists were forecasting an economic slow-down not an economic recession and that she had confidence in the city “weathering an economic slow down” without programmatic cuts.

Hartzog appeared less concerned about the potential for a recession than Johnson. Like Jiha previously stated, Johnson noted that an inversion of the bond yield curve is usually an indicator of an approaching recession. Hartzog conceded that a recession was “certainly possible,” but said that economists were forecasting a slow down, which would not be as severe. She also took the opportunity to state that the city has “built up our reserves and continued to have savings plans” during economic growth periods.

Johnson brought up a Citizens Budget Commission report, which said that a recession could cause revenue shortfalls of $15-20 billion over three years. This would use up the entirety of the city’s reserves. When asked if the administration thought that more should be added to the reserves, Hartzog reiterated that the reserves were sufficient to weather an economic slow down and said that the city was planning to add to the reserves moving forward.

Johnson also called out a New York Post article that claimed the city “is careening closer to all-out financial bankruptcy.” Johnson called the article “irresponsible” and Hartzog concurred. “We think there does need to be a level of improvement in transparency,” Johnson said, suggesting that OMB should provide “best estimates” of future revenue reserves because of OMB’s tendency towards conservative estimates. Hartzog said she does not believe that would be necessary.

Between the testimonies of Jiha and Hartzog, Lorraine Grillo made her first appearance before a City Council committee as commissioner of the Department of Design and Construction (DDC). Grillo has also retained her role as head of the School Construction Authority (SCA), therefore leading the two main city agencies responsible for construction projects. Council Member Vanessa Gibson, a Bronx Democrat and chair of the Capital Budget Subcommittee, praised the SCA under Grillo’s leadership for its “strong capital delivery.”

Grillo told the committee that the varied scale of projects, which include everything from sewers to playgrounds, presented a challenge for the DDC, which she said “should not neglect smaller projects,” because many affect New Yorkers’ quality of life. She also expressed frustration that the state has not granted “blanket design-build authority” for the city’s capital projects, saying that it would streamline the capital delivery process.

Jamie Torres-Springer, the first deputy DDC Commissioner, said that the state’s granting of design-build authority for the construction of four community-based jails, which are planned to replace the Rikers Island jails is “a really important opportunity for the city “to demonstrate the effectiveness” of design-build. Grillo added, “but imagine if we could use it for all projects?”

Grillo also noted that there are “layers of policy and red tape” at DDC that SCA does not have. She has ordered an agency-wide review. She also pointed to the DDC’s Strategic Blueprint, which she labeled a “far-reaching plan” and “broad outline of improvements” with “common-sense fixes.” One area of improvement that she highlighted was front-end planning. The DDC has expanded its front-end planning unit and now works with agencies before they submit their project initiation requests. According to Grillo, “we are beginning to see a difference.”

With preliminary budget hearings over, the next steps in the city budget process are seeing the results of the new state budget, due by April 1, followed by the City Council releasing its formal preliminary budget response. Soon after, the mayor will release his executive budget plan, setting off another round of Council hearings as well as public and private negotiations.