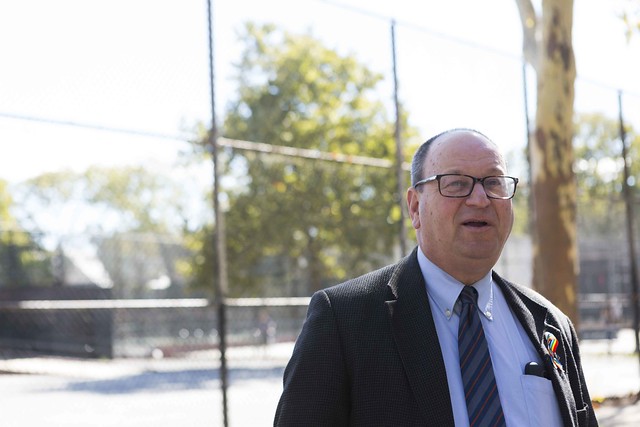 New York City Council Member Barry Grodenchik, a Democrat from Queens, will face formal disciplinary charges after a complaint of sexual harassment against him was found to be credible by the Council’s Committee on Standards and Ethics on Thursday.

Council Member Steven Matteo, chair of the standards and ethics committee, announced at a hearing Thursday afternoon that the committee would initiate formal disciplinary proceedings against Grodenchik regarding Section 10.80 of the Council’s rules, specifically in relation to anti-discrimination and harassment.

According to Matteo, the complaint against Grodenchik alleged that the Council member “paid unwelcome attention” to a Council aide over the course of a year, including making comments about her weight and repeatedly greeting her with a hug and a kiss on the cheek. In one instance, at a work meeting with several other people present, Grodenchik allegedly blew a kiss at the staffer and, when the meeting ended, walked around the table to give only her a hug and kiss on the cheek.

In a statement prior to the hearing, Grodenchik appeared to reference only the last incident, though without full details, and apologized. “It is never my intention to make any person feel uncomfortable, and I sincerely apologize if my actions had that effect,” he said. “For me, as is true for many of my colleagues, a hug is a common greeting for people I have known for a long time, but as others do not feel that way, I will certainly be more sensitive to that in the future.”

Grodenchik said he had decades of exemplary public service, including working under “four amazing and strong women. Those women included an Assemblywoman and three Presidents of the Borough of Queens.”

He also stated that Council Speaker Corey Johnson had “decided that I should be punished by being stripped of my Chair of the Parks and Recreation Committee,” which he said was “an over-reaction, with an excessive punishment that is harmful to this body.”

But Johnson’s office said no action had been taken to remove Grodenchik as chair of the committee, as he claimed. “No one should ever be made to feel uncomfortable in the workplace and singled out for unwanted attention,” Johnson said in a statement. “The Standards & Ethics Committee investigated and deliberated over this matter very carefully. In light of their decision to formally charge Council Member Grodenchik and launch disciplinary proceedings against him, I am immediately removing him from the Budget Negotiating Team, pending the results of the disciplinary hearing.”

Following the Thursday hearing, the standards and ethics committee will issue a “formal notice of charges” to Grodenchik, who appeared before them in a closed session earlier in the day. Further deliberations and a vote on the charges will happen in a closed-door session, Matteo said, before a report is issued. If the committee finds that Grodenchik must be sanctioned, its recommendations will be sent to the full Council for a vote.

The committee also dismissed one other matter on Thursday regarding allegations against a member who allegedly asked a staffer to participate in political activities. The committee ruled the claim “unsubstantiated” and closed the matter. The committee has been particularly busy in this session, and there appear to be multiple ongoing investigations into alleged wrongdoing by Council members. Speaker Johnson has said this is in part because he is quick to refer complaints to the committee rather than attempting to resolve them internally.