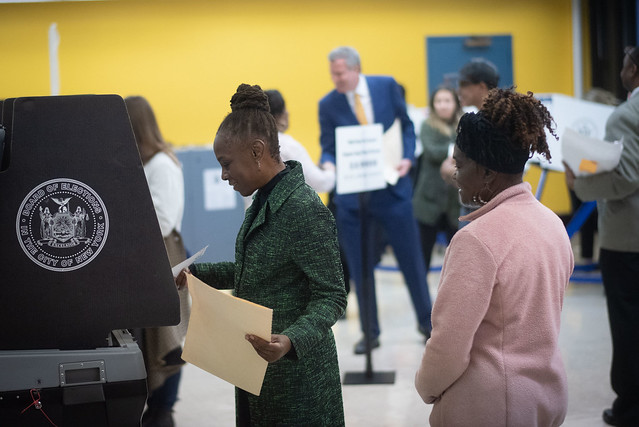 The New York City Board of Elections, a state entity funded by the city, has a less-than-stellar reputation for running elections and has long been resistant to going beyond the letter of state law in improving voter access and participation. And this year, the city BOE must contend with a new state mandate to create an early voting program for potentially millions of voters, as well as a push by the city to provide broader poll site interpretation services in immigrant communities.

At a Tuesday hearing of the New York City Council’s Committee on Governmental Operations, officials from the BOE testified to the complexities of implementing the new early voting mandate by the November election.

The state Legislature recently approved the program, which requires nine consecutive days of early voting before Election Day and, according to the provisions of the law, a minimum of 34 poll sites across the city. The state also passed legislation to allow the use of electronic poll books at poll sites. The state BOE approved regulations for early voting on Monday and the city BOE faces a deadline to declare its chosen sites on Wednesday, May 1.

While Mayor Bill de Blasio on Monday called for the BOE to offer 100 early voting sites across the city, offering the board $75 million to do so, the BOE does not appear ready to meet the mayor’s request. Not long after BOE executives testified before the Council, the board's commissioners voted to approve 38 early voting polling sites for November, inviting criticism from the mayor and others.

There will be 10 sites in Brooklyn and seven each in the Bronx, Queens, Manhattan, and Staten Island. The board also determined early voting hours, which will vary based on date leading up to the November 5 Election Day. Voters will receive their early voting poll site assignment from the BOE.

The City Council committee hearing also delved into a new bill proposed by Brooklyn Council Member Mark Treyger that would require the Voter Assistance Advisory Committee, a nonpartisan entity housed under the New York City Campaign Finance Board, to provide interpretation services at poll sites in several languages beyond what is currently required by state and federal law.

The bill would help facilitate the work of the city’s newly created Civic Engagement Commission, approved by voters in a ballot referendum last year, that is charged with, among other things, developing a poll site interpretation services program. Still, the city BOE has repeatedly argued that it is not under the jurisdiction of city laws, but of state laws, complicating matters.

Early Voting Poses Challenges
New York has long been a laggard in voter turnout and election reform, and it became the 38th state to approve early voting this year. But the program is a monumental lift, particularly for the five boroughs of New York City, home to 8.5 million residents.

The recently approved legislation to create the program requires one early voting site for every 50,000 registered voters in a county and no more than seven sites, though local counties have the discretion to add more. The 2020 state budget includes $10 million in funding for early voting and $14.1 million for electronic poll books for the entire state, distributed according to a formula that the state BOE must create.

On Monday, Mayor de Blasio offered the city BOE $75 million to establish 100 polling sites for early voting (he included an additional $21 million for the purchase of electronic poll books in his executive budget proposal last week).

“We have to get early voting right, and we're saying very clearly to the Board of Elections, we'll put our money where our mouth is,” de Blasio said.

At the Tuesday Council hearing, New York City’s new and first chief democracy officer, Ayirini Fonseca-Sabune, emphasized the importance of instituting a robust early voting program. “If a significant percentage of New York City voters vote during the early voting period, we may be able to reduce some of the strain that we see on our Election Day systems that has led to breakdowns at polling places,” she said. “Lines will be shorter, poll sites will be less crowded.”

She noted that early voting also correlates with higher participation, and stressed that seven sites in each county are “not sufficient to accommodate the needs of voters in New York City.” She pointed out, for instance, that Brooklyn would essentially have the same number of sites as upstate counties one-fifth the registered voters.

BOE Executive Director Michael Ryan, a few hours before the board's commissioners make their early voting decisions, repeatedly emphasized that early voting is a complicated endeavor and that the city must take a cautious approach in order to establish a strong foundation for the program that will allow it to grow and improve over time.

When the program was approved, the city did not have the infrastructure in place to implement it, he said, and is in the process of creating it, including providing a system of ballots on demand to voters. Among the issues is that the board must approve a new vendor to provide electronic poll books, which will happen in June, and then has to train poll workers in the new systems.

Ryan stressed that the board is willing to work with the de Blasio administration and the City Council to ensure they create an efficient program, but he insisted that in soliciting input from other jurisdictions that have long had early voting programs, the BOE has been warned of the many variables and challenges they face. “The worst thing that we could do is get overly ambitious and not have it work and undermine...voter confidence,” he said, emphasizing the need to phase in a program over time.

“There will be obstacles. Nothing will be perfect...There’s gonna be many lessons learned,” said Dawn Sandow, the BOE’s deputy executive director. As usual, none of the board’s commissioners, political appointees from the local Democratic and Republican parties who are confirmed through the Council, testified before the Council. Those commissioners make many essential decisions to BOE operations, which are carried out by Ryan, Sandow, and their employees.

Voting reform advocates celebrated the passage of early voting and praised the mayor for offering a massive boost in funding. But even they cautioned at the hearing that the BOE must be careful in implementing a new system that could cause confusion among both voters who must use it and the poll workers who must administer it. Some also raised concerns about cyber security and urged the BOE to ensure adequate firewalls and redundancies to protect election systems and the integrity of individual votes.

Interpreting State Law and City Mandates
As a creature of state law, the BOE has consistently opposed the mayoral administration and City Council’s efforts to impose new mandates on its operations. Since 2017, it has refused to abide by a local law requiring the postage of signs when a poll site is moved. More recently, the city again ran up against the BOE when it attempted to provide language interpretation services in poll site buildings.

By state and federal law, the BOE is only required to provide interpretation services in five languages -- Spanish, Mandarin, Cantonese, Korean, and Bangla -- which city officials and advocates say is insufficient for New York City’s population, which speaks hundreds of languages.

The Mayor’s Office of Immigrant Affairs had additionally sought to provide services in Russian, Haitian Creole, Yiddish, and Polish within poll site buildings during the February 26 special election for public advocate. But the BOE sued the city, arguing that since the interpreters were not hired and trained by the board, they would be engaging in a form of electioneering and therefore must remain at a distance of at least 100 feet from a polling site.

A state judge rejected the BOE’s argument and did not issue an injunction against the city, allowing interpreters into poll sites. But the BOE has appealed and that ongoing litigation could determine whether the city can continue to provide those services for future elections.

Both Tregyer’s bill and the new Civic Engagement Commission would create a much more expansive interpretation services program. “Language access is not electioneering,” Treyger said, accusing the BOE of essentially taking actions that are “nothing short of voter suppression.”

But the BOE’s Ryan said the city should rather await the legislative process playing out at the state level. At the hearing, he pointed to bills introduced in February in the state Senate and Assembly that would preempt the city’s efforts if they pass.

“There really is no daylight, Councilman Treyger, between your position and the board’s position,” Ryan said. He noted that if the BOE were to provide interpretation services for any  particular linguistic group without being legally required to do so, it could give other groups the potential to sue under the Equal Protection clause of the Constitution. “What we’re simply asking for is a structure, a legal structure, some authority to tell us legally ‘This is what you need to do,’” he said.

The de Blasio administration seemed to hedge its bets on Treyger’s proposal. MOIA Commissioner Bitta Mostofi said the administration supports the intent of the bill but did not express direct support for it. She said the CEC, rather than the VAAC, should be tasked with implementing it and that the bill was just one of the elements of implementing a program. “There should other factors that are taken into consideration when establishing where the services should be and what those services should be,” she said.