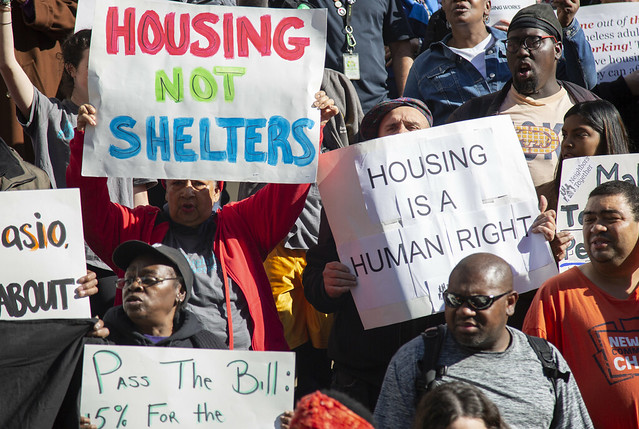 Mayor Bill de Blasio was defensive on Thursday when asked about a report, released earlier this week by the Coalition for the Homeless, that criticized him for not doing enough to address the city’s homelessness crisis.

While he has acknowledged his administration’s struggles addressing the crisis, the mayor has devoted significant additional resources to fighting homelessness and though the number of people in shelter has increased under his watch, he has made some progress in breaking the trajectory of the growth, which has been particularly acute over the past ten years.

Experts and stakeholders like those at the Coalition are calling for more from the mayor, but de Blasio said Thursday that there should be focus on how much his administration has done to move people -- 100,000 of them, he said -- out of shelter and into housing. The administration has also enhanced efforts, with some success, to reduce evictions. But, there is no plan to drastically reduce the homeless population.

On Tuesday morning, the Coalition, led by policy director Giselle Routhier, hosted a press conference at its Manhattan headquarters to release its detailed “State of the Homeless 2019” report, evaluating both New York City and State, particularly the mayor and Governor Andrew Cuomo on efforts to address homelessness.

“The report finds that policy failures by the City and State have exacerbated the decades-long homelessness crisis stemming from New York’s severe lack of affordable housing,” an announcement from Coalition for the Homeless reads. “In January 2019, an all-time record 63,839 men, women, and children slept in New York City shelters.” (That number has dropped all the way to 58,700 so quickly because the administration bought several buildings from landlords providing shelter that then became categorized as affordable housing.)

Homelessness in the city is still near record highs, and the “report card” from the Coalition that is part of the larger State of the Homeless “gives Mayor de Blasio a failing grade on his efforts to create sufficient housing for homeless New Yorkers and Governor Cuomo multiple failing grades on housing vouchers, homelessness prevention, and systematic cost-shifting practices that unduly burden the City.”

While de Blasio announced a modest goal in 2017 to reduce the city’s homeless population by 2,500 people by 2022, the Coalition projects that if certain policy and program measures are not soon enacted, “the shelter census is on track to increase by 5,000 people by 2022.”

The “House Our Future NY Campaign,” which the Coalition is leading, is calling on Cuomo and the state Legislature for a variety of actions, including a major increase in rent subsidies. Meanwhile, the main change it wants from de Blasio is an increase in the number of apartments set aside for homeless New Yorkers in his “Housing New York 2.0” plan.

Asked at an unrelated press conference about the report and the central question of dedicating more units in his housing plan toward moving people out of homelessness, de Blasio said on Thursday:

"We’ve been over this a lot of times, I’m happy to go over it again. So, I want to just do a little background. I’ve been working on these issues since 2002 when I became Chairman of the General Welfare Committee in the City Council. I know the Coalition for the Homeless really, really well. I have immense respect for them. I have disagreed with them more than one time, and I disagree with them now. I’m always astounded when we have this conversation that we don’t start with the actual facts on the ground, the things that actually happened. I don’t know what’s going on here. 100,000 people in the last five years went from shelter to affordable housing – 100,000 people. Now, I get that good news is not easy to report and I actually don’t hold it against you guys, I hold it against your editors, bluntly, much more. But the fact is, 100,000 people already got affordable housing – that’s kind of newsy – that’s not theory, that’s not percentages, that’s actual human beings. So, I want to give a lot of credit to Homeless Services for the way they’ve created that, working with all of the rest of the team that works on affordable housing. That already happened and we’re going to continue to do that. But look, I care deeply about fixing the problem at the root cause. For the first time, we’re able to stop homelessness on a really big level because we’re providing lawyers – you know, real serious numbers of lawyers to stop evictions. We did things like the rent freeze for two years. I mean, these are the ways you stop homelessness to begin with, and we think it’s having a big impact. But we have more work to do, but there’s no question in my mind that the shelter population is going down because these initiatives are starting to work, and we’re going to be doing more. You know we’re going to be using eminent domain more and other tools to keep bringing that population down."

According to the Coalition’s report, “The last appreciable reduction in homelessness in New York City took place immediately prior to the Great Recession, and since then the shelter census has doubled.” More recently, in city fiscal year 2018, “an all-time record 133,284 unique individuals spent at least one night” in a city shelter, the report says, “an increase of 61 percent since fiscal year 2002 when the figure was 82,808 – fueled in large part by the increase in the number of homeless single adults.”

The report focused on preventing homelessness, housing people experiencing homelessness, and shelter processes and conditions. While the report finds New York City is taking some redeeming action, it finds the state woefully insufficient.

Homeless Housing and Prevention
New York City was graded with an “F” for its housing production and supply, largely because de Blasio has only designated 15,000 units of affordable housing for homeless households in his plan to build and preserve 300,000 affordable units. Only 6,000 of the 15,000 will be available in the near future, according to the report.

Supportive housing, which provides for social services for certain homeless people struggling with mental illness and/or substance abuse and seeking shelter, was graded a “C” for both the city and the state. Last year, the number of people in supportive housing was at a 14-year low, according to the report, despite the total number of people in homeless shelters being at an all-time high. However, de Blasio and Cuomo have been working to change that, bringing on-line 850 units and 550 units, respectively, by the end of 2018.

The report does indicate the city’s success when it comes to homelessness prevention, and to some degree, with housing vouchers and stability. Evictions have been declining since 2016, in large part to the city’s added resources toward providing lawyers to low-income tenants facing eviction, resulting in the city earning an “A-”.

On the other hand, the state has been letting parolees out directly into shelters without enough planning for their reentry, often keeping them in prison beyond their release date because of a lack of space. “This is entirely the state’s fault for not doing adequate discharge planning,” said Routhier. The state received an “F.”

The state also received an “F” from the Coalition for the Homeless for vouchers and stability, having not provided any meaningful subsidies toward homeless housing, whereas the city got a “B-” for keeping over 8,000 households from being forced into homeless shelters through subsidies.

However, the city often places homeless people in room rentals, which is not always a stable situation because people are often paired with roommates they have never met. “It oftentimes results in returns to shelters,” said Routhier.

Shelter Processes and Conditions
The city’s ability to meet the need for homeless shelters was rated satisfactory with a “C+” as investment from the city to shelter the homeless grew by about $800 million since 2011. The state was given an “F” because its contribution only grew by $71 million. The state’s 2019-2020 budget continues to cut relevant spending.

According to the report, city agencies are not finding as many violations as they used to when it comes to homeless shelter conditions. However, the infrastructure at older shelters is not holding up and routine cleaning and maintenance is often poor. The people in the shelters are also often poorly treated by the staff, the report says. On shelter conditions, both the city and state received a “C+.”

The increasing number of students spending time in homeless shelters (more than 114,000 in 2018, up by almost 50,000 since 2011) missed a lot of days of school -- about 32 days on average last year. That is almost double the 18 days of absence that the state defines as  “chronic absenteeism.” On top of that, less than 50 percent of homeless families were placed near the school of their youngest child. Thus, the Coalition for the Homeless graded the treatment of homeless children and students by the city a “C-.”

Solutions
The House Our Future NY Campaign urges the mayor to build 2,700 new apartments for homeless New Yorkers per year between 2019 and 2026. There is a hope that the city will continue to provide rent subsidies, free of conditions that may drive people back to shelters. There is also an appeal to increase the number of housing placement vouchers for homeless families to rent on the private market.

It also calls for an earlier completion date for the 15,000 city-funded supportive housing units. Construction is the priority. “It is critical to know that we’re heavy on new construction because preservation units are already occupied,” said Routhier.

The report calls for Cuomo to support the Home Stability Support program to provide state subsidies for people who are homeless or at risk of being homeless and increase the pace of production of the state’s 20,000 supportive housing units.