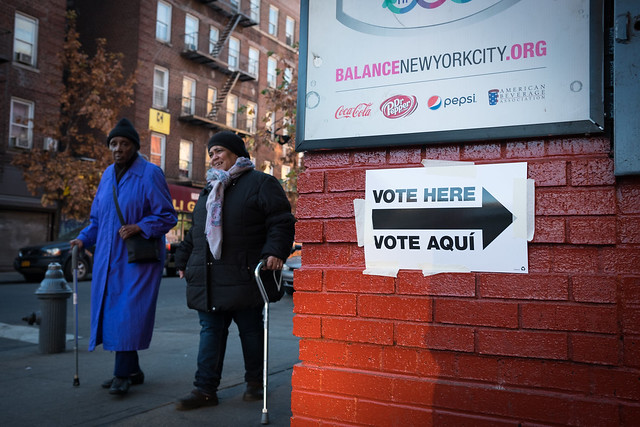 The tale of the 2018 midterm elections has, so far, been one of groundswells and precedents lending credence to the populist narratives that have come to characterize post-2016 America.

In New York, anecdotes about crowded poll sites, and near-heroic efforts to cast ballots amid the congestion, were ubiquitous during and after the election.

A report, published on Tuesday by NYC Votes and the Voter Assistance Advisory Committee, arms of the city’s Campaign Finance Board, now reveals just how significant the changes were in 2018, when New Yorkers voted for members of Congress, statewide positions including Governor, and members of the state Legislature.

New York typically suffers from voter turnout rates below the national average and, in general, voter participation across the country drops off during midterm elections as compared to presidential election years. But the 2018 midterms in New York City unsettled that arithmetic.

The picture painted by the report, which is mandated by law after an election year, is of a 2018 midterm election that more closely resembles a presidential year than a typical midterm in terms of voter registration and turnout.

According to the report, turnout in New York City hit 39.1 percent, a significant leap of about 10 percent from the previous midterm in 2014 and closing the gap to within 15 percent of the 2016 presidential election. By comparison, the gap between turnout rates in 2016 and 2017, a mayoral election year, was 35 percent.

Even more unusual, 11 neighborhoods in New York City had turnout rates above the national rate. All numbers for November general elections.

Over a million more ballots were cast in 2018 than in 2014, marking the first time New York City has seen a significant uptick in turnout in a midterm election in nearly two decades. At the same time, there was a shift in the behavior of new voters, especially when considering certain demographic factors.

Registered to Participate
While typically there is wide variability in turnout across age groups, in 2018 new voters of all ages turned out at more uniform rates. There were more than 250,000 new voter registrations in 2018, the report says.

Turnout among newly registered voters in the 18 to 29 age range -- the group least likely to vote -- was only 7.3 points below turnout among 30 to 39 year olds -- the group with the highest rate. This same comparison in the 2014 midterms yields a difference of 17.1 percent, though in 2016 the difference was much closer to last year, at 7.5 points.

The behavior of newly registered voters, as described in the Campaign Finance Board report, indicates an electorate that became more intentional as it expanded.

Last year, turnout was actually slightly higher among newly registered voters than the overall pool of registered voters. This was also the case during the 2016 presidential election when polarizing campaigns drove people to the polls in record numbers. By contrast, the turnout among new registrants in the previous midterm was more than seven points below the overall rate.

Naturalization and Voting
The CFB report also points to naturalization as a factor in turnout, although it does not speculate as to why.

A number of the lowest turnout districts identified in the report have a large immigrant population. Neighborhoods like Sheepshead Bay, which has a large Russian immigrant population, and Richmond Hill, a third of whose population is naturalized citizens, have very low turnout rates.

Places like South Ozone Park, whose population is 36 percent naturalized, of which a large portion are English-speaking Guyanese Americans, make it hard to say that the impact of naturalization has more to do with language access than with other factors. Less than 30 percent of South Ozone Park voters cast a ballot. (City Council Member Mark Treyger currently carries a bill to expand language access at the polls, but it is unclear if the Council has jurisdiction given that the city Board of Elections is a state entity.)

Unanswered questions about immigrant communities and voter turnout form something of a problem for a city with such diverse ethnic, linguistic, and political communities.

“We have an obligation to serve voting populations that are underrepresented,” said Matthew Sollars, Director of Public Relations at the CFB.

The report recommends a number of "reforms with immediate impact," including restoring voting rights to people on parole, automatic voter registration, changing the party enrollment deadline, and instant run-off voting, among others intended to expand access to the polls. Some of these changes are being debated in Albany, others by the 2019 New York City Charter Revision Commission.

The Federal Factor
The 2018 elections saw an uncommon confluence of competitive races at the state and federal level, including in June congressional primaries and September state primaries, as well as the November general election.

But the Campaign Finance Board report suggests that not all competitive races are equal post-2016.

Several high-profile primary challenges for the state Senate were part of an effort to unseat members of the Independent Democratic Conference (IDC), the now defunct group of breakaway Democrats who caucused with Republicans for most of a decade. But despite receiving a bulk of the attention from the media, interested onlookers, and passionate activists, there was not a dramatic difference between voter turnout in those IDC elections and others.

“This shows that the perceived competitiveness of an election does not necessarily lead to increased turnout in that district,” the report states, “and that in this high-profile election, voters turned out regardless of whether they were voting in a competitive election.”

The observation that IDC affiliation had little impact on turnout raises the question of what did. Some other figures in the report indicate that, while the Trump presidency appears to have an impact on federal races across the board, that effect has not fully extended to the level of local politics.

Last year’s midterms looked a lot like the presidential election, but 2017’s municipal elections did not. The report states registration rates in 2018 were “nearly double the number of new registrations the city saw in 2017.”

Most newly registered voters who cast ballots in 2016 did not return in 2017, when the city’s elections were mostly not seen as particularly competitive. “Only about 80,000, or 24.7 percent, of people who registered in 2016 and voted in the presidential election voted in any election during the 2017 citywide election cycle,” the report says.

Whatever the factors, the report is careful to point out that all of these races “pale in comparison to the surge of voter registrations that occurred in 2016 during the presidential election cycle.”

“In October 2016 alone,” the report says, “124,000 new registrations were processed, which is nearly half of the total number of registrations processed throughout all of 2018.”

Note: this story has been updated with a paragraph about the report's recommendations that was accidentally left out of the original published piece.