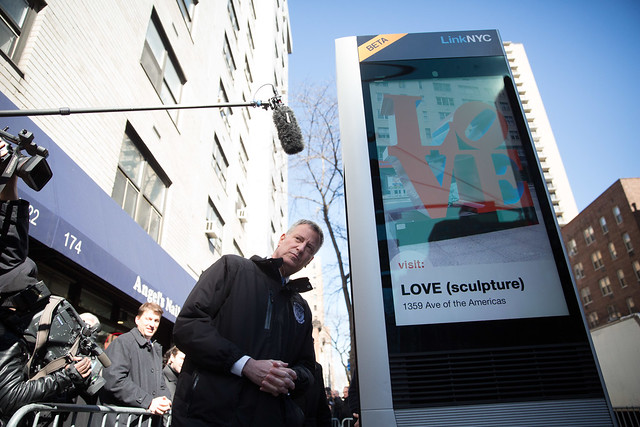 During a February 2016 press conference, Mayor Bill de Blasio made the first phone call on New York City’s first LinkNYC kiosk, stationed at the corner of 16th Street and 3rd Avenue. “It will be the biggest and fastest network in the world, and completely free of charge. And one thing I know about my fellow New Yorkers, they like things that are free of charge," said de Blasio.

Not only that, but New Yorkers were promised money for the city’s general fund. That money would come in the form of revenue based on the agreement with proprietors who would refurbish the city’s obsolete payphones and sell advertising. While the city is indeed set to see the promised money, the financials of the LinkNYC equation have been choppier than the free phone calls or street-side wifi.

The kiosks, which many residents and visitors of the city recognize as the nearly 10-feet-tall rectangular obelisks displaying 55-inch screens of digital advertising that dot the sidewalks, are seen by some as a modern twist on the streetscape to, in part, bridge the digital divide by offering free wireless internet.

There are now roughly 1,800 LinkNYC kiosks installed across the city, according to Samir Saini, the city’s commissioner for the Department of Information Technology and Telecommunications (DoITT), who discussed Link at a March City Council budget hearing and mentioned a guaranteed $27.5 million in revenue for 2019.

The kiosks do offer fast and free wifi, as well as the ability to make free domestic phone calls, charge USB devices, and make 911 calls, with special red buttons to summon emergency services. (Tablet internet browsing was also an original feature of the kiosks. After it was discovered people were watching pornography on them, however, that feature was quickly disabled.)

While some of the civic technology promises of Link have been realized, what is less clear is the revenue side of things. It’s all part of the deal inked between New York City government and CityBridge, a so-called consortium of Intersection, Qualcomm, and CIVIQ Smartscapes. (Intersection was launched by Sidewalk Labs, which is owned by Google.)

According to the franchise agreement, signed in 2014, a total of 7,500 LinkNYC kiosks were to be installed across the five boroughs by 2022. In terms of the financials, a November 2014 press release from de Blasio’s office promised $500 million in guaranteed revenue in the first 12 years (2014-2026) of the program. Not mentioned by that press release, the franchise agreement stipulated $750 million in guaranteed revenue by 2029.

But in the first years of the program, revenue generated by the Link kiosk advertising, as outlined in DoITT budget documents and a department spokesperson, show the much-heralded program is not meeting its targets. From 2015 to present, LinkNYC has fallen short of its revenue projections by more than $21 million, and is projected to miss by an additional $13 million for fiscal years 2019 and 2020. It adds up to $34 million under what is guaranteed to the city from CityBridge during that five-year period, calling into question the efficacy of Link advertising.

The basic financing in the deal is that CityBridge gets access to 7,500 payphone sites and must pay for their refurbishment into the Link kiosks and provide certain public services. In exchange, CityBridge gets to keep any advertising revenue beyond what the city is guaranteed in the contract. That revenue would come from contracting with a third party to build out the Links, as well as allowing Intersection to run advertising campaigns on the kiosks’ displays.

The revenue guarantee means CityBridge must pay a specified amount to New York City every year, even if Link advertising campaigns don’t generate that minimum number.

As it sells Link advertising, Intersection is working with BerlinRosen, a local public relations firm (which also ran major aspects of de Blasio’s two successful mayoral races) that has trumpeted the Link expansion.

The guaranteed city revenue can be from advertising revenue and non-advertising revenue, including “the fair market value of any non-monetary consideration (in kind) in the form of materials, services or other benefits, tangible or intangible, or in the nature of barter the Franchisee may receive,” per the franchise agreement. That same agreement stipulates the minimum annual revenue CityBridge has promised the city each year through 2029: 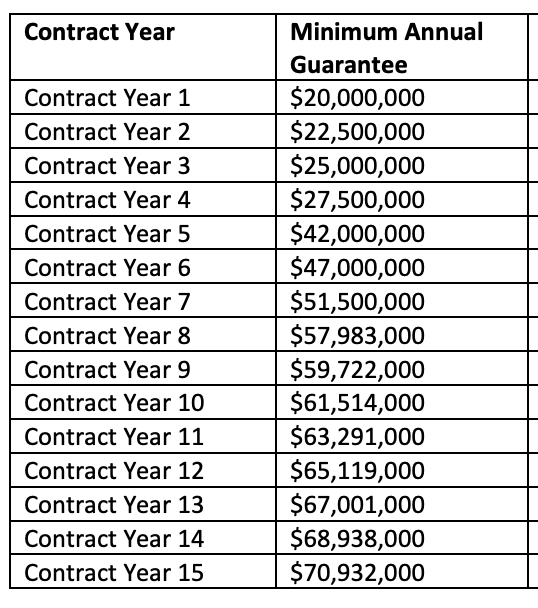 Actual revenue brought in by the Link kiosks from 2015 through 2018 shows that the kiosks initially failed to sell enough advertising to hit the CityBridge guarantees to the city, meaning the consortium had to make up the difference (there were no Links up and running in 2015). CityBridge has started to hit those targets, if only barely.

Revenue has fallen short over the first four years and is predicted to continue to fall short of the minimum guaranteed city revenue for every year of LinkNYC’s first six years, save 2017, when the actual revenue of $26 million just passed the promised $25 million that had to be paid to the city.

For 2019, Link revenue is expected to fall short of the minimum guaranteed to the city by 23 percent. And 2020 is projected to fall short by a little over 7 percent. The total shortfall in advertising revenue for both years, if the projected revenues are correct, just for CityBridge to meet what it owes the city, would be another $13 million. It doesn’t hurt New York City financially, as CityBridge is obligated to pay the minimum annual guaranteed revenue, but it raises questions about the long-term viability of Link advertising revenue that could boost the city.

Potentially cutting into LinkNYC’s advertising revenue are LinkLocal campaigns, which are, according to a Link spokesperson, “free advertisements for small businesses to promote their stores and nonprofits to promote free local events. Additionally, LinkNYC has partnered with more than 40 nonprofits to help raise awareness for their campaigns.” The spokesperson declined to share any examples or case studies of previous LinkNYC advertising campaigns.

The spokesperson added that over 40 nonprofits partnered with LinkLocal for advertising, with nearly 600 total free campaigns being run through the program.

Intersection first declined to share with Gotham Gazette its advertising rate card, which is typically used to offer potential clients exemplars and costs, and then denied the existence of the rate card upon further questions. Intersection also declined to disclose how many paid campaigns have been run through the kiosks, claiming the number of paid campaigns is not part of their internal data tracking.

Other issues have plagued LinkNYC. In late April, the NYPD arrested a local man for smashing 42 LinkNYC displays. His acts of vandalism were captured by the kiosks’ on-board surveillance cameras, which most New Yorkers were likely unaware of prior to the smashing spree and related news coverage. This led to alarm bells over just how much the Links are watching people, and how much of their data is being collected in the name of providing free wifi.

LinkNYC has responded to these issues, responding to Twitter users that all video footage is deleted after seven days, and that it only shares the footage in response to “valid subpoenas.” As for data, the LinkNYC privacy policy states it collects quite a bit of it, including your IP address and URL requests through the wifi network.

In 2016, the year the program launched, local reports detailed how some people set up living-room-style arrangements around a single Link kiosk, bringing lawn furniture or milk crates to camp out within close range of the units. Other concerns have been raised over the kiosks’ free domestic phone calls being used to arrange drug deals and other illicit and illegal activities.

Despite some issues and concerns, usage of the Links has steadily increased since they hit the streets in 2016. According to the city’s Open Data Portal, over 10,000 terabytes of data (equitable to over 2 trillion songs) has been used by New Yorkers in over 1.5 billion total Link sessions. Perhaps one day Link advertising will pay for all that data usage.