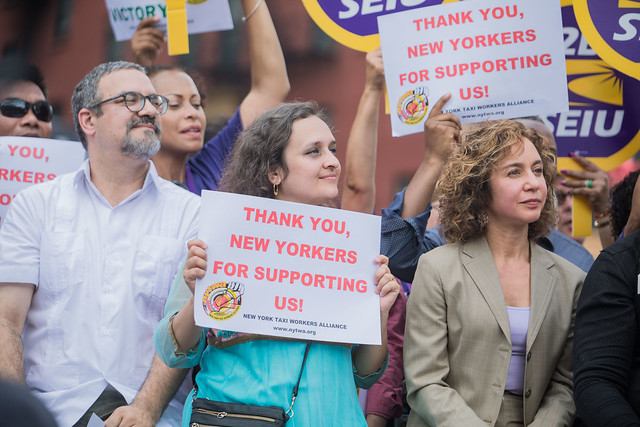 Meera Joshi’s five-year tenure as the head of the New York City Taxi and Limousine Commission coincided with a tumultuous time for the industry she was tasked with overseeing and regulating. Joshi, who left the de Blasio administration in March, joined the What’s The [Data] Point? podcast from Citizens Budget Commission and Gotham Gazette to discuss her tenure, the taxi industry and key steps she spearheaded to regulate it, and what’s next for app-based for-hire vehicle companies like Uber and Lyft.

The introduction and explosion of those ride-hailing apps has shaken the overall for-hire vehicle industry, disrupting the traditional taxi sector in New York City and beyond, and creating new challenges in terms of street congestion, driver working conditions, and more. In two years, the number of for-hire vehicles in New York City grew 59% and they now outnumber yellow and green taxi cabs my many thousands, having surpassed taxis in 2017, according to TLC data. As of last year, there weree 13,587 licensed yellow cabs in the city, along with 3,570 green cabs, and 107,435 app-based for-hire vehicles.

At the same time, the value of taxi cab medallions has depreciated from a peak over $1 million to $175,000, leading to financial hardship and even suicide, and questions about a government bailout.

On the podcast, Joshi discussed the challenges of regulating an emerging business model while also attending to the decline of another, as well as other issues that came up during her tenure as chair and CEO of the Taxi and Limousine Commission, a position she was appointed to in 2014 by Mayor Bill de Blasio. Joshi had served under the pior TLC commissioner and also held positions at the city’s Department of Investigation and with its police oversight body, the Civilian Complaint Review Board.

During Joshi’s five years leading the TLC, the de Blasio administration, at times working with the City Council, sought to be aggressive in response to the industry disruption posed by Uber and Lyft.

Under her and de Blasio’s leadership, the city made a failed attempt to extend some regulations to the for-hire apps in 2015, when the companies were smaller, losing a battle over placing a cap on the number of new cars that could be licensed after a high-profile battle with the companies and their supporters. The Taxi and Limousine Commission did mandate that larger app-baseds companies share trip data with the city, taking a significant step toward understanding how the emerging sector was influencing traffic and travel patterns in the city.

The city wound up getting the cap in 2018, while also creating sweeping new pay protection for for-hire drivers. New York City was the first municipality in the country to take the series of actions, leading to significant changes for both the companies, their traditional taxi competitors, and the city’s transit scene.

“In New York City, we have a good history of data-driven policy,” Joshi said on the podcast. She pointed out that taxi cabs have been tracked in great detail since 2007. The city Department of Transportation uses that information to understand traffic flow and the TLC uses it to make driver protection, licensing, and other regulations. The city’s mandate that app-based taxis share trip data followed this precedent and allows for similar data-driven policy, according to Joshi.

In what would become the final months of her tenure, New York City rolled out several new regulations that have impacted the app companies.

Last year, the City Council, with the blessing of Mayor de Blasio, voted for a one-year cap on new for-hire vehicle licenses, unless for wheelchair accessible cars, and mandated a minimum wage of $17.22 per hour for rideshare drivers. It also empowered the TLC to set minimum pay rates. These actions enabled the TLC to study the impact of ride-hail apps on the city’s congestion, among other dynamics. Uber and Lyft have opposed these legislative and regulatory actions.

The city’s recent actions have come under legal scrutiny since they were announced, but the city has prevailed when legal challenges have been filed and the cases have been closed. “This is an industry that is very litigious,” Joshi admitted.

New state congestion charges for taxis ($2.50) and rideshare vehicles ($2.75) were ruled to be legal by a New York judge in February. This month, another judge upheld the new minimum wage rates against challenges from Lyft and Juno. However, the app companies’ lawsuit against the one-year cap is still ongoing.

The new regulations are having clear effects. In April, Uber and Lyft both stopped accepting new driver applications, perhaps because of the new utilization rate structure and wage minimums, not to mention the vehicle license cap. The utilization rate structure effectively penalizes rideshare companies for having a large number of drivers on the road at the same time who are not moving passengers.

During the interview, Joshi explained that “40% of every hour the app drivers that are on the road don’t have passengers. The driver pay rules try to address that balance in a way that works off of incentives and penalties. You’re going to have to pay more if you can’t keep your drivers busy,” she said. She pointed to the April announcements from Uber and Lyft as being “great news” for existing drivers, because they are the ones most hurt by oversaturation.

Joshi also believes the move was “a good example of where regulation and the market worked together,” where “the regulation is aimed at the problem and the reaction came from the companies.” This was the main goal of the policy, according to Joshi, who said “closing the pool is what we really wanted to get at.”

On May 8, some app-based drivers in New York and other cities across the country went on strike in protest of low wages and low quality of life at work, though some in New York hailed the city’s new laws and said they were striking in solidarity with drivers elsewhere and against the companies more generally. This came just ahead of Uber’s initial public offering (IPO) of stock. The New York Taxi Workers Associations coordinated the strike in New York City.

Despite her criticisms of ridesharing apps, Joshi also recognized the benefits that the industry had for the city. She said that “this is a good service, a popular service filling a void.” According to Joshi, the boroughs outside Manhattan have seen the biggest benefit from the apps and the effect on those areas “was the concern when the cap legislation was passed.”

However, Joshi also said that TLC data has shown “that there is still continuous growth” in mobility in boroughs other than Manhattan through the apps, which she attributes to the “built-in excess in the business model.”

While Joshi oversaw these new regulations and implemented them in the face of opposition from the major companies, she has also been criticized for negative consequences that the growth of these apps, including the falling value of taxi cab medallions and wages for taxi drivers, to the increased stress and suicide rates of drivers.

When asked why she is not in favor of a bailout for taxi medallion owners, Joshi said that “the problem stems from the loan,” pointing out that taxis earn profits when they are on the road and saying that banks were irresponsible in their lending.

“So many of these taxi medallions have outsized loans attached to them because the price was inflated,” comparing the situation to the housing bubble of the late 2000s. She believes that a bailout would primarily benefit the banks who offered loans for taxi drivers to acquire the medallions, saying, “I don’t know if the individual owner is better off, because they still may owe a tremendous amount of money to the banks.”

Joshi believes that banks “are going to have to write [the loans] down anyway” and “resize them for what they’re selling for now, because they have to take the loss and they might as well keep the borrower.”

As Joshi moves on to a position at NYU’s Wagner School of Public Policy as a visiting scholar and a policy advisor at Remix, the debat eover the future of the taxi industry in New York City continues, with some of her moves hailed as major progress to help save the yellow taxis and improve the lives of drivers of those and other for-hire vehicles, while others say the city has not acted quickly or aggressively enough to help taxi medallion owners, for-hire vehicle drivers, and others.

Inarguably, New York City was the first U.S. city to effectively increase regulation of the app-based for-hire vehicle companies, despite significant opposition from the industry.