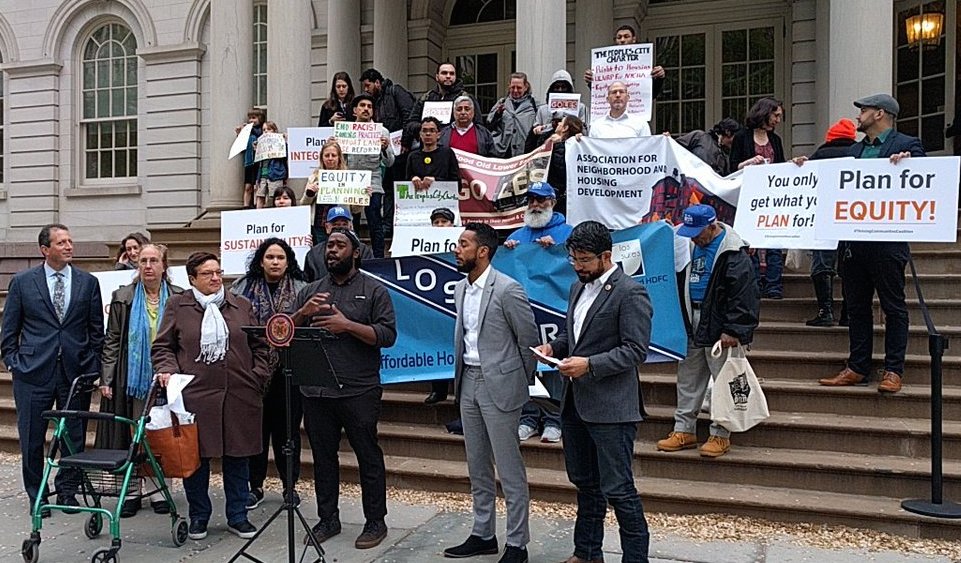 The City Hall chambers of the New York City Council were packed with over 100 people on Thursday evening for a hearing of the 2019 Charter Revision Commission. New Yorkers who attended, including some elected officials, were largely focused on always-contentious land use issues and processes that the commission is considering as part of its larger effort to rethink aspects of city governance.

The Manhattan hearing was the fourth of the five boroughs, to be followed by Staten Island on Tuesday night, where the 15-member commission heard reactions to its recently-released “preliminary staff report,” wherein the commission staff sought to narrow the scope of the body’s final months of deliberations as commissioners propose changes to voters on the November ballot. The commission will announce its city charter revision proposals this summer, providing months for public education on the potential changes that could touch on the powers of certain elected offices, city budgeting, voting procedures, and more.

Many who testified -- and rallied outside City Hall ahead of the hearing -- were members of organizations in the Thriving Communities Coalition, which is calling for more sweeping changes to city planning and land use processes than the charter revision commission appears to be considering.

Other topics of interest among those who testified over the course of more than six hours were elements included in and excluded from the staff report, such as the creation of a budgetary rainy day fund, instituting ranked-choice voting, strengthening the Civilian Complaint Review Board (CCRB), which deals with police misconduct allegations, and the creation of a city chief diversity officer.

The Thriving Communities Coalition argues the status quo in city planning is racist and socio-economically unequal. Members of the New York City Council Progressive Caucus, which is backing the idea of the city charter being amended to include a mandatory comprehensive city plan every ten years, something the charter commission appears disinclined toward, joined the rally to urge the commission to consider such a proposal.

Council Members Carlos Menchaca, Antonio Reynoso, and Brad Lander were among those who spoke. Manhattan Borough President Gale Brewer also spoke at the rally and proceeded to give testimony in front of the Charter Revision Commission.

“The city needs to and must intentionally plan and invest for communities like the South Bronx, if it wants to assure an equitable, diverse, and thriving future for the city,” said Carmen Vega-Rivera, leader of Community Action for Safe Apartments.

Uniform Land Use Procedure (ULURP) and Broader City Planning
The rally leading up to the hearing mostly focused on the city’s ULURP process, neighborhood rezonings, and city planning. Several people who testified at the hearing said they believe the possible charter revisions being considered by the commission, per the staff report, are appropriate, but inadequate.

Community Board 8 Manhattan Chair Alida Camp asked that boards like hers, which provide non-binding input on land use matters that require city approval, receive earlier notification and an additional 45 days as part of the process to provide public notice and vote on applications. Camp also said the Mayor has too much power in the rezoning process. “We ask that mayoral zoning overrides be prohibited,” she said.

Borough President Brewer urged that the possible proposals on ULURP as outlined in the commission staff report go forward. These include providing more time for the early stages of the ULURP process and clarifying how city plans and projections impact each other. She also advocated that Borough Presidents should play more of a role in ULURP.

Brewer also criticized the mayoral administration over neighborhood rezonings that have been moved for targeting neighborhoods of low-income people of color, urging for the Department of City Planning to take a more long-term approach.

“I further urge the commission to propose a charter amendment requiring decennial review of the zoning resolution,” she said.

Brewer further argued the charter should mandate a publicly accessible map portal for Zoning Lot Development and Easement Agreements as well as specifications regarding how “major” and “minor” modifications are defined when it comes to Special Permits from the City Planning Commission.

The Civilian Complaint Review Board
As it has at other hearings, the CCRB received a lot of attention during the Manhattan meeting on Thursday. The consensus for most people giving testimony was that the Police Department needs further oversight via the CCRB and that the NYPD commissioner should not have the current level of discretion in the disciplinary process.

Whether the CCRB should be elected or appointed by elected officials as is currently the set-up was subject to more debate because of perceived bias from the City Council, which must approve the 13 appointees.

Charter Revision Commissioner Sateesh Nori came out strongly against the idea of popular elections of CCRB members. “That is why we have Donald Trump in office,” he said of decisions by the masses. When challenged on that stance, he responded saying that the CCRB discussion was “hinging on an election when every other discussion is about how elections are flawed.”

When Brewer testified, commissioners asked her if she thought the CCRB should be decided through a vote, and she said, “I am not supportive of the vote because people don’t turn out unless they are aware.” She agreed with the charter commission’s proposals, but also suggested further amendments, which included codifying the current Memoranda of Understanding to ensure cooperation between the CCRB and police department and setting the CCRB budget at 1% of that of the Police Department’s.

Ranked-Choice Voting
As has been the case throughout the charter commission process, most who testified and discussion ranked-choice voting on Thursday expressed strong support for instituting the process, which would help avoid costly runoff elections and also provide for more apparent popular support among the winners of heavily contested elections.

New York City only currently holds runoffs for citywide positions, where as elections for borough presidencies and the City Council can be won by simple plurality. Ranked-choice voting could eliminate run-offs and provide so that the winner of all races has reached whatever the set threshold is, perhaps 50%, after multiple rounds of tallies.

Rainy Day Fund
Andrew Rein, President of the Citizens Budget Commission (CBC), a non-partisan, nonprofit watchdog and think tank, gave detailed testimony supporting the creation of a possible Rainy Day Fund (RDF), which would also need state approval and, he said, help the city better prepare for recessions and tough budgetary times. He recommended mandates that the RDF be big enough to cover a two-year, multi-billion-dollar budget gap and be provided minimum annual deposits when there is economic growth, with restrictions on withdrawing from the fund unless there is an economic contraction.

Overall, Rein said CBC hopes the commission will keep its proposals for changes to city budgeting minimal. “Since the current system isn’t a problem, we shouldn’t try changing it,” he said.

Chief Diversity Officer
Wendy Garcia, the Chief Diversity Officer from City Comptroller Scott Stringer’s office, stressed the need for a citywide chief diversity officers as well as one at every city agency. Stringer has made the push for such requirements his number one priority in charter revision.

Garcia indicated that there is evidence of the effectiveness of her position, saying that it has helped the comptroller’s office increase contract spending with minority- and women-owned businesses from 11% to 29%.

*Note: Gotham Gazette did not stay for the entire six hour-plus hearing.