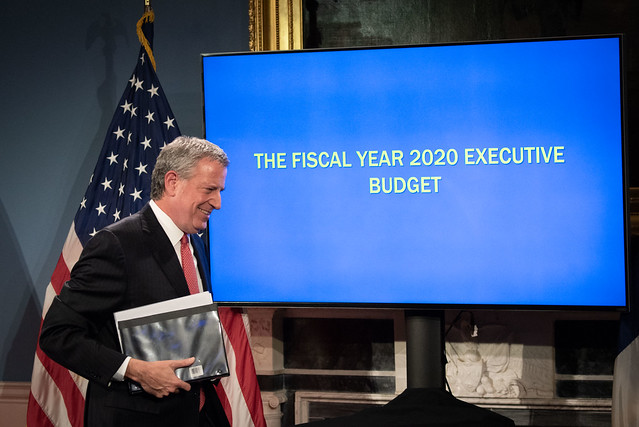 Mayor Bill de Blasio’s much-touted budget savings program is not what he has made it seem.

After rapidly growing the budget over his first five years in office and resisting calls to find significant efficiencies at city agencies, de Blasio this year instituted his first “program to eliminate the gap,” or PEG, to achieve hundreds of millions of dollars in “savings.” But though the mayor boasted at his executive budget presentation of $916 million in identified savings over the current and next fiscal years -- including $629 million in agency PEG savings -- his budget has little by way of true city agency cuts to existing spending.

The mayor’s spendthrift approach has led to a $20 billion increase in the city budget since he took power, while savings and rainy day funds, though solid, have remained below optimal levels, according to budget experts. Exceedingly good economic times have allowed the mayor to spend somewhat lavishly on programs and personnel without having to make many tough decisions about cuts.

The city is also maintaining about $5.72 billion in reserves each year, though the mayor has not added to them this year and the City Council is pushing for an additional $250 million infusion.

The mayor’s latest spending plan, a whopping $92.5 billion executive budget proposal for the 2020 fiscal year, is no exception to his spending growth trend. And as de Blasio touts new savings, fiscal watchdogs are casting doubts and poking holes.

Instituting a targeted PEG for the first time this year, de Blasio required city agencies to make specific spending reductions through various means -- efficiencies, re-estimates of spending and revenue, and service reductions. The mandated PEG, with target amounts for each agency set by the mayor’s budget office, came after years of the administration relying on a Citywide Savings Plan, which had agencies offer voluntary savings, re-estimates, and revenue-raising ideas.

All told, the mayor’s executive budget estimated the $916 million in savings between fiscal years 2019 ($419 millions) and 2020 ($496 million). An analysis by Citizens Budget Commission, a nonprofit fiscal watchdog, of the overall savings plan shows that for 2020 the Mayor’s Office of Management and Budget identified about 62.5% of the savings from what it classified as agency efficiencies.

Melanie Hartzog, the director of the Mayor’s Office of Management and Budget, in testimony before the City Council at a budget hearing last month, stressed the “high levels of efficiency savings” at city agencies that were found through the PEG. That included service reduction for the first time under de Blasio.

“In Fiscal Year 2020, the first full year impacted by the PEG, efficiencies account for two-thirds of the savings. To achieve these savings agencies streamlined and improved practices, yet maintained service levels,” she said.

But CBC’s analysis shows that the estimate of efficiencies in the executive budget savings plan may be overblown. Agency efficiencies in fiscal year 2020 only accounted for about 20.77% of the savings, while re-estimates and funding shifts accounted for the bulk, about 66.4%, according to the analysis, performed by CBC’s Riley Edwards.

City Council Member Daniel Dromm, chair of the finance committee, echoed CBC’s concerns about finding true efficiencies at last month’s budget hearing, saying the Council “is struggling to understand the purpose of the PEG.” He noted, as CBC pointed out, that the PEG and savings plan together did not find sufficient efficiencies or recurring savings at agencies. He noted that PEGs are supposed to force administrations to find “true efficiencies and recurring savings.”

Dromm pointed out that the mayor has typically relied on the voluntary CSP instead of a PEG, during a period of healthy growth and positive economic conditions.

“Since the implementation of that program, the Council has been urging the administration to search for savings more rigorously because the majority of the program consisted of accruals, re-estimates, and increased revenue projections that would have occurred even in the absence of a savings program,” Dromm added. “So, when the administration announced a mandatory PEG this year, the Council was hopeful that the mayor was finally getting serious about reining in inefficient spending. Unfortunately, the result of the PEG is just more of the same.”

CBC experts point out that certain categories of savings that OMB classifies as efficiencies aren’t truly that, including swaps where state or federal funds are used in place of city funds or the hiring freeze that OMB says saved about $116 million across fiscal years 2019 and 2020. According to OMB, the hiring freeze involves permanently taking down 1,600 positions in the executive budget (many are currently filled and will be eliminated when they become vacant without affecting agency performance) after 1,000 vacancies were already eliminated in November. The freeze reduced net planned headcount growth this year for the first time under de Blasio and is meant to create savings every year till 2023.

“Because we’re dealing with positions that are already vacant, we consider that a re-estimate rather than an efficiency,” said CBC’s Edwards, in a phone interview.

CBC director of city studies Ana Champeny said this savings plan has largely been a “continuation” of past years’ plans. “There was a change in their approach in setting the targets for the agencies but they still haven’t delivered substantially more efficiency savings,” she said. According to CBC, these could be achieved through redesigning programs and shrinking or eliminating inefficient ones, as the mayor did by eliminating Extended Time Learning at Renewal and RISE schools; by using technology to improve operations; sharing resources across agencies; finding alternative service providers within or outside the public sector; and strengthening centralized management of cross-agency operations.

Champeny said the city should not stop looking for savings through re-estimates or funding shifts, which are “routine budget management that you would expect every administration to be doing. Our criticism is that there should be more PEG savings, more efficiency savings in addition to this routine budget and fiscal management.”

Ideally, efficiency savings in one year would equal about one percent of the city-funded budget, she said. “That’s about $700 million in one year, not across two years,” she said.

Nicole Gelinas, senior fellow at the Manhattan Institute, a think tank, concurred. “I think the PEG is pretty superficial in the context of this larger budget,” she said, noting that the executive budget increases overall agency spending by about $1.4 billion compared to the mayor’s initial proposal released in January, allowed by higher revenues than earlier projections. Those higher revenues “are giving them some room to increase spending while sticking to this narrative of savings,” she said. “Overall, agency spending is not shrinking by any means. It would be hard to call this an austerity program.”

“It would be good if agency spending pretty much kept pace with inflation, going up 1.5-2% a year,” she said.

Budget watchdogs have also repeatedly urged the administration to find long-term recurring savings rather than temporary ones. Gelinas pointed out that hiring freezes, in particular, “don’t last forever” as a source of savings.

“It’s kind of superficial because the mayor has increased hiring by so much already that it’s kinda time for a pause,” she said. “Hiring freezes are not very good management. This is the same problem at the MTA. If you need a new person to do something, you should hire that person. If there’s something that the government is doing that it shouldn’t be doing anymore, repurpose that person. But just a sort of general hiring freeze oftentimes means positions that should be filled aren’t being filled. So it’s kind of the opposite of efficient.”

De Blasio has overseen a large increase in the city workforce, from about 297,000 employees when he took office to roughly 332,000 now. Still, he has budgeted for many more positions at various agencies that have gone unfilled each year, with many of those now “frozen” and the act of keeping them empty being counted toward savings.

OMB spokesperson Michael Greenberg said in a statement Tuesday, “Our aggressive approach helped us meet ongoing, fundamental needs, and balance the budget. We will continue to find ways to save money for New Yorkers in future financial plans.”

In a Thursday statement, after this article was published, Greenberg pushed back against the criticism from Gelinas and CBC. "The 2,600 positions we have permanently eliminated since November will lead to hundreds of millions of dollars in savings, much of it recurring annually, and agencies will provide the same level of service with fewer employees. Despite what others might say, this is the actual definition of 'efficiency savings,'" he said.

Short of creating more efficiencies, the city risks major service reductions should an economic downturn set in. Even without a downturn, the city faces a budget gap of $3.5 billion in 2021 and $3 billion annually in the years after, according to its own documents. While those numbers are manageable and fairly typical, they become much more concerning if there is a recession.

“A recession could easily double or triple these out-year budget gaps that we already need to fill,” Champeny said. “Right now you have the ability to take the time and do a careful analysis of where you can make efficiency changes or improve your processes whereas if you’re cutting during a recession, you’re sometimes looking for quick savings and you’re not as precise and you’re going to have more negative impacts in services reduction.”

Gelinas added, “The city always depends on revenues coming in higher than expected and then because it says it conservatively budgeted, it has these extra revenues. So these budget deficits basically disappear. But that only happens if the city’s economy is doing well. If we do fall into a recession...then suddenly these are real deficits so you’d need a lot more than a billion dollars in savings in two years. So that’s when you really start to see layoffs and service cuts.”

Note - This article has been updated with additional details about the administration's partial hiring freeze.

Note - This article has been updated with additional comment from OMB spokesperson Michael Greenberg.