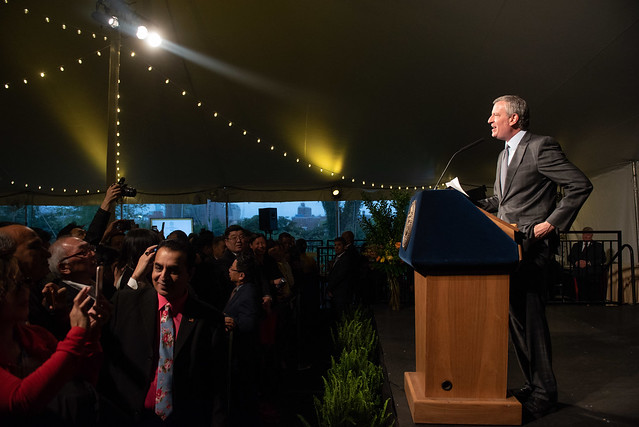 In the last three years, Mayor Bill de Blasio has been investigated by law enforcement and oversight entities at the city, state, and federal levels for soliciting donations from people seeking favors from his administration. While several of the investigations have concluded without chargers, investigators and others have criticized the mayor for shirking conflicts of interest and campaign finance rules.

In the case of the city investigation, conducted by the Department of Investigation (DOI) and referred to the Conflicts of Interest Board (COIB), it is hard for the public to know just how close to breaking the law the board felt he came.

What is known is that DOI investigated thoroughly and found the mayor had violated guidance from the COIB, the agency tasked with enforcing the city’s ethics statute, when he raised money for a political nonprofit from individuals with or seeking city business; and that COIB, despite the DOI’s substantiation of the claim, did not take formal, public action against the mayor. It has also become clear that de Blasio is unwilling to be fully transparent about his communications with COIB, and that the mayor’s case has led COIB to adopt a new rule around the type of fundraising he did.

For serious violations of the conflicts of interest law, COIB has a range of enforcement options, from issuing public admonishments and imposing fines, to negotiating discipline, including termination, with the employee’s agency. But for minor violations or when something in the law prevents prosecution, which includes the grey area the mayor has operated in, COIB can only respond from a grey area of its own.

In the absence of charges, the DOI referral may still have resulted in what COIB refers to as a “private warning letter,” a tool it employs outside its formal adjudication process, sent to the mayor. Strict privacy provisions in the city charter and due process concerns prevent the board from discussing it, and the mayor, who is at liberty to be fully transparent, refuses to answer questions about the recently-revealed investigation into his behavior, including the DOI findings and potential COIB correspondence.

Richard Briffault, the COIB chair, told the New York Times that the board was prevented from issuing a fine or a public reprimand in de Blasio’s case because of restrictions in the ethics law. (Two other penalties -- joining a settlement with the violator’s employing agency, and ordering the employee to pay back any financial gain -- would not apply to the mayor’s fundraising.)

De Blasio has refused to speak on the matter since the latest news was revealed, first in reporting by The City, only saying that he believes he has sufficiently addressed an issue that is now past, without acknowledging the new information about the DOI referral -- including findings of wrongdoing by him -- or the question of whether he received a private warning letter from COIB.

When pressed yet again by reporters at an unrelated news conference last week, the mayor maintained his stance, saying, “I’m just not going over it. Every investigation was closed, no further action was taken, and the entity involved is defunct.”

The Conflicts of Interest Board cannot reveal whether any action is taking place or took place unless it formally determines the law has been violated. That would require the board to fully adjudicate a case and issue a public determination including action taken, which it typically does multiple times a month, often for cases in which a city employee misuses city resources, like using official email accounts for personal business or having outside employment without a waiver from the COIB.

It appears the type of fundraising de Blasio did through his now-shuttered non-profit did not meet the legal requirements for a formal penalty, even though he ignored COIB guidance.

The rule is based on two COIB advisory opinions from 2003 and 2008, respectively, which were cited in the DOI referral; “an advisory opinion is not a ‘rule of the Board,’” according to a statement that accompanied the new rule, and as such cannot lead to penalty on its own, even if violated.

The episode casts light on how far New York City’s conflicts of interest law goes and what COIB is able to do to enforce it. The de Blasio case has shown challenges around how to bring the ethical underpinnings of the law to bear in cases where there is not a well-established precedent or official proscription.

“The Board has now acted”
In the absence of formal enforcement the board has, since 1995, retained the option of issuing a private warning letter to city employees who have come close to violating the conflicts of interest law, but whose behavior fails to satisfy some element of it.

A COIB spokesperson provided Gotham Gazette a list of four instances in which a private warning letter might be used, including when there is not enough evidence to support a violation, or when “there is some legal reason why the Board is unable to engage in a formal enforcement action.”

Also on the list of instances are when the public servant has already been disciplined by their employing agency and when “a current or former public servant has allegedly committed a minor or isolated violation, particularly if self-reported, e.g., a public servant sent a single email using his City email account related to his private business.”

The latter two are unlikely to be the case for de Blasio and the Campaign for One New York, given that de Blasio does not appear to have ever been formally disciplined, and the fact that his non-profit raised approximately $4 million and solicited donations from people with business before the city on multiple occasions, according to the DOI report.

The conflicts of interest law was enshrined in the city charter in 1990, and there is nothing in it that mentions private or confidential warning letters.

In 1995, while its enforcement staff was severely diminished and facing a mounting backlog of cases, COIB was employing letter notices to ensure compliance in financial disclosure matters. The same year, the board issued six “informal warning[s] or other confidential letter[s]” for the first time. Also that year, the board established a formal liaison with the Department of Investigation to bolster the enforcement work of its anemic staff.

“It’s questionable that an agency can actually create policy without promulgating rules because it’s required that they go through a public process where there’s a hearing and people have input,” Alex Camarda of Reinvent Albany, a government watchdog organization, told Gotham Gazette.

But the private warning letter appears to be an informal tool COIB uses to ensure the law is followed, and tracked every year in the board’s annual report.

“A private warning letter is simply a letter written by the Board to a current or former public servant or lobbyist to educate the recipient about the law relevant to his or her alleged conduct,” the COIB spokesperson told Gotham Gazette in an email.

In COIB’s Monograph, which provides commentary on the conflicts of interest law, it states that private warning letters “sometimes prove useful in the enforcement process if a public servant who has been so warned commits another offense.”

Going forward, the new COIB rule will make soliciting donations from entities with city business to nonprofits affiliated with the city or a city official subject to the ethics law. Violations could result in fines of up to $25,000, the highest the board can impose.

But the new rule is not likely to apply to de Blasio’s past actions. In the COIB statement announcing the rule, the board said, “Without any ‘rule of the Board’ governing official fundraising, the Board is prohibited by the Charter from imposing a penalty on a public servant” who violated the Charter’s “catch-all” provision related to conflicts with one’s official duties. In the case of fundraising for nonprofits affiliated with a city agency or public servant, the statement says, “The Board has now acted to fill this gap.”

Tags: Bill de Blasio • Conflicts of Interest Board • Department of Investigation • campaign for one new york