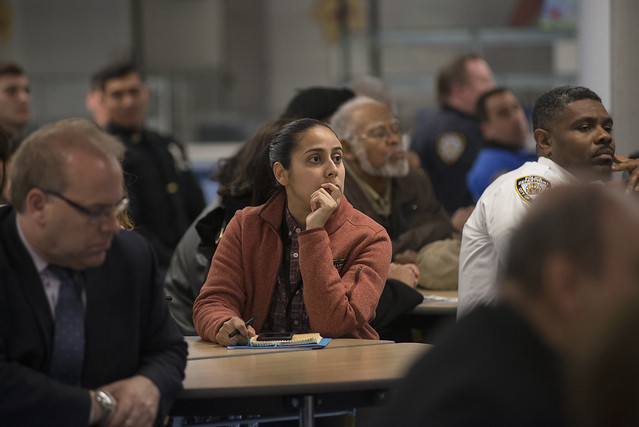 Last year, amid a national awakening about sexual harassment spurred by the #MeToo movement, the New York City Council passed a package of legislation. Among other things, it required the city to disclose more data about harassment claims and to undertake workplace climate surveys about harassment, discrimination, and other issues in order to create action plans and make improvements.

But the first climate survey results were recently delivered to the City Council and do not contain enough information to illuminate how different agencies handle the problem of harassment, said City Council Member Helen Rosenthal, chair of the Committee on Women and Gender Equity. Rosenthal, who helped lead the charge on the Stop Sexual Harassment Act bill package, told Gotham Gazette the initial climate survey results have prompted her to prepare legislation requiring agency-specific climate survey data.

The climate survey of city agencies was conducted by the Department of Citywide Administrative Services (DCAS), which provided its report to the mayor’s office and the City Council. Gotham Gazette obtained the five-page report through a Freedom of Information Law request.

The survey, which was voluntary for respondents and anonymized, looked at how familiar agency employees were with the city’s Equal Employment Opportunity policies and complaint process, whether they experienced or witnessed workplace discrimination, and also how aware supervisors and managers were of EEO processes.

Of the respondents, 32.4% were supervisors and managers; 59.5% identified as female; 85.5% said they were heterosexual. (The survey broke down the respondents by age, racial background, gender and sexual identity).

Overall, a majority of respondents (the report does not say how many were polled, the law only requires the survey to be offered to all employees) said they were familiar with EEO policies and had received training within the last year, that they had not personally experienced or witnessed discrimination of any type, and that their workplace was safe from EEO violations.

Pointing to the report’s general conclusions, she said, “The majority of respondents know the policies, did not personally experience [discrimination], and they indicate their work is safe. Well how do we even know what standard DCAS is comparing this to?”

Data released by the city earlier this year showed that the Department of Education accounted for a majority of sexual harassment complaints -- 186 out of 472 complaints filed in the 2018 fiscal year. What may be true of one agency, DCAS for instance, where there were only eight complaints filed, may not be true of the Department of Education. “So that’s just an out of context assertion that I dont think is valid,” Rosenthal said of the notion that the majority of respondents find their workplaces safe. “I’d like to see a little more rigor there.”

“That could’ve been an interesting finding that they culled out, and say well what does that mean? What does that tell us? Does that mean that people are not reporting? That could be the takeaway. And that’s concerning.” Rosenthal said.

Responses about agency procedures and environments were also of concern to Rosenthal. Asked if their workplace was “safe and free of violations of the EEO policy,” 61.5% said they strongly agree or agree; 18.9% said they strongly disagree or disagree; and 19.7% were neutral on the question. “The truth of the matter is, that’s not a slam dunk for them,” Rosenthal said.

“I suppose if you had the information by agency, then you would see which agencies need a serious action plan,” she added.

Spokespersons for Mayor Bill de Blasio and Council Speaker Corey Johnson did not provide comment on the results of the survey or whether they would support Rosenthal’s proposal to disaggregate data by agency. A spokesperson for de Blasio said “Sexual harassment has no place in the City of New York. The de Blasio Administration is committed to preventing sexual harassment – and all other forms of discrimination – inside and outside of the workplace. We look forward to reviewing the bill.”

About 92.4% of respondents said they were familiar with the city’s EEO policy and 84% said they knew how to file a formal complaint about an EEO violation. But only 57.4% said they knew how EEO complaints were processed after being filed. The report did acknowledge this last statistic, and concluded that more training and communication would be required to make employees more aware of the process after a complaint is submitted. Under the law, DCAS will be required to create an action plan to implement this change by the end of the year, with a report due on actions taken by March 31 of next year. Another survey will also be carried out in July 2020.

Here are a few of the other highlights of the survey:
-70.6% strongly agreed or agreed that their “rights are protected to pursue [their] duties in a respectful workplace”; 14.3% said they strongly disagree or disagree; 15.1% were neutral on the question.

-67.3% strongly agreed or agreed that they felt protected from workplace harassment; 16.2% said they strongly disagree or disagree; 16.6% were neutral on the question.

-61.1% strongly agreed or agreed that they are treated equally and fairly; 20.6% said they strongly disagree or disagree; 18.3% were neutral on the question.

-63.7% strongly agreed or agreed that steps are taken to prevent violations of the EEO policy; 13.8% said they strongly disagree or disagree; 22.5% were neutral on the question.

-59.7% strongly agreed or agreed that violations of EEO policy are taken seriously and investigated; 12.9% said they strongly disagree or disagree; 27.4% were neutral on the question.

-51.2% strongly agreed or agreed that adequate response is provided to those employees who have experienced and submitted claims of violations of EEO policy; 12% said they strongly disagree or disagree; 36.9% were neutral on the question.