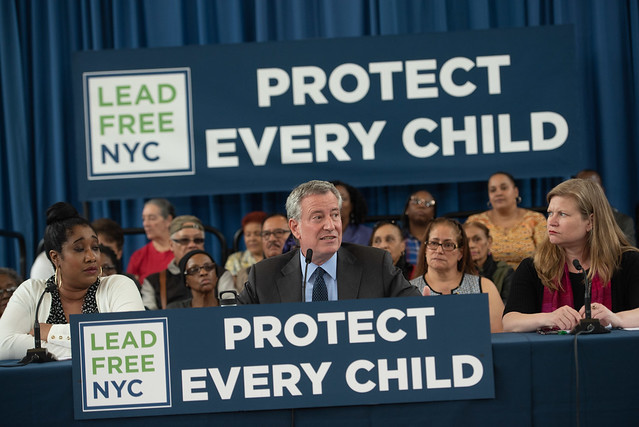 Four months on the job, NYCHA Interim Chair and CEO Kathryn Garcia remains optimistic and determined about the future of the New York City public housing authority, home to more than 400,000 New Yorkers and several major crises. Garcia, who was the city’s sanitation commissioner for about five years until taking leave to fill in as the head of NYCHA, appeared on WBAI’s Max & Murphy show, where she discussed the de Blasio administration’s plans and programs to address problems at the housing authority, which is now under federal monitorship.

“NYCHA is huge organization and in many ways you can think of it as a small city, the size of Miami,” Garcia said. “One of the things I wanted to put in place while I was here is the on-boarding of the federal monitor, which started a few weeks after the agreement was signed to make sure we were setting up systems to come into compliance and have a successful monitorship.”

Garcia discussed working with the monitor, Bart Schwartz, and said she does not believe she is in the running to be named as the permanent NYCHA chair and CEO -- Mayor de Blasio and federal authorities have extended their own deadline to name a new NYCHA leader until the end of June. She also detailed some of what NYCHA is doing to address its long-term financial troubles, including the controversial plan to allow developers to build new private apartment buildings, with a mix of “affordable” and market-rate housing, on under-utilized NYCHA land.

In terms of getting Schwartz integrated and beginning their working relationship, Garcia said they were doing “big-picture planning on issues of compliance” and “setting up the three departments -- compliance, safety, and quality assurance,” and addressing lead paint, “hopefully eventually coming off having a monitor.”

“But there’s also a longer-term goal,” Garica said, of “how do we drive investment into these buildings. Because they are assets of the city and critical homes for all of the residents.” It’s important, she said, to consider a variety of newer options, including the “Obama-era RAD program, or what we call the Build to Preserve program to ensure residents are seeing impact as quickly as possible,” referring to the Rental Administration Demonstration program that allows for private management of NYCHA buildings and added federal dollars, as well as the “infill” private development on NYCHA land.

For Garcia, and whomever replaces her, the challenges are immense -- not only has the public housing authority had a lead paint scandal that it is now aggressively attempting to mitigate, but overall NYCHA has a $30-plus billion needs assessment for the housing stock to be brought to a state of good repair over the next five or so years. That need includes things like roofs, boilers, elevators, and more.

On the show, Garcia noted that “one role NYCHA is serving is it’s the only bastion of affordable housing left in some of these neighborhoods, so it’s doubly important for us to make a commitment to it.”

“[W]e don’t have a lot of options at this point in terms of the incredible need,” she said at one point, pointing to the administration’s plan to lease NYCHA land to developers who will fund millions of dollars in repairs at the NYCHA properties where they build.

NYCHA is operating under Schwartz’s eye after the federal Department of Housing and Urban Development (HUD) threatened receivership and federal prosecutors turned up major safety issues. At the end of January, Mayor de Blasio and HUD Secretary Ben Carson came to a deal, approved by a judge and the U.S. Attorney for the Southern District of New York, that included the monitor.

The month before, in December 2018, Mayor Bill de Blasio unveiled “NYCHA 2.0,” a ten-year plan to repair public housing in the city by bringing in $24 billion. The plan includes funding for capital repairs across the NYCHA system and tackling problems such as lead paint, mold, elevator malfunctions, heat outages, and vermin infestations, which have increasingly plagued the city’s public housing in recent years. The plan represents three-quarters of NYCHA’s $31.8 billion overall capital needs.

Garcia acknowledged that it has been “somewhat more complicated” to run an agency under federal monitorship, but also said that “outside eyes” can often be helpful in tackling a complex issue such as NYCHA.

Garcia remains “hopeful” that the state and federal governments will increase their funding for NYCHA, but she, like de Blasio, appears realistic that major help is unlikely any time soon. She did note, though, that an allocated $450 million in state money is on the verge of finally being spent on NYCHA repairs, and she explained that “one of the reasons we’re looking to these programs that convert from traditional public housing funding to section 8 is it’s been historically more fully funded than traditional public housing.”

On the RAD program and whether it should raise concerns of NYCHA “privatization” as some have claimed, Garcia said, “we are leveraging the private market to bring additional funding into NYCHA.” She emphasized that NYCHA will still own the land and will ensure that residents are protected in development.

Despite some initial pushback to the “NYCHA 2.0” plan, Garcia called the Build to Preserve program, which would see private development on NYCHA-owned land, “another tool in our toolbox to drive funding into NYCHA’s buildings” and “one of three legs” along with RAD and selling air rights. She also said the program would not work or be appropriate everywhere.

“I completely understand why NYCHA residents would be anxious about it because historically people got moved out of their homes and they never came back,” Garcia said, but then also promised, “we are taking a completely different approach to this,” pledging a lot of communication, no residential displacement, and investment of revenue directly into the home campus.

Saying there aren’t other options to address NYCHA’s needs, Garcia added, “This is a way to take...value from the campuses and do two things really: make sure residents do well and also increase the supply of housing and affordable housing in the City of New York, which is of course always in dire need.”

On the lead crisis at NYCHA, Garcia said, “We stabilized thousands of apartments that had presumed or lead-based paint with children under six. We still have a lot more to do...We don’t know where all the lead paint is, and that is why we kicked off what is called the XRF initiative, which is X-raying the paint and being able to tell whether it has any lead. We started that on April 15...It will take us till end of 2020 to get that done because we are planning to test 134,000 apartments.”

Some issues present “relatively straightforward fixes, like baseboards were painted lead, but nothing else in the apartment, while there will probably also be apartments where lead paint was used on every wall and those will obviously be much more significant jobs,” she said. X-raying all the paint is the “critical first step,” she said.

Asked her assessment as to what really went wrong around lead paint inspections, Garcia said, “I obviously wasn’t here to assess exactly what all the steps were...One of the things that I think is true is a basic failure to understand what the requirements were and how much work it was going to take under HUD regulations and getting systems in place to really ensure that that happened,” later adding that it was also about complying with “local law.”

She also said “lead-based paint is...inherently a maintenance issue,” because “it’s not dangerous if it’s not peeling and chipping off the walls,” but when leaks are allowed to fester and apartments are not regularly painted, problems arise.

Another big part of NYCHA 2.0 is the plan to convert 62,000 of its 176,000 public housing units to Section 8, through programs such as RAD. Sarah Watson, the deputy director of the Citizen Housing and Planning Council, appearing on Max & Murphy just after Garcia, compared this to a similar strategy that was used to fix London’s public housing in the 1980s.

“The UK did hit a similar sort of crisis around public housing around 40 years ago, so has spent 40 years trying to deal with a very similar issue, which is it’s somewhat easy for government to build housing but it’s difficult for them to figure out how to keep that going” without dramatically increasing subsidies, she said.

She also said that the first phase then saw “a downside effect of being left with the worst quality housing stock with the most troubled and low-income residents.”

While she acknowledges that replicating London’s plan may not be a complete fix, Watson said that fixing NYCHA “will take some radical new approaches and certainly some bold leadership,” like what happened in the United Kingdom. London’s public housing included a substantial number of homes in addition to apartments and “it was a little harder to get apartments to sell.”

[LISTEN: Max & Murphy Podcast: Lessons from London for How to Fix NYCHA]