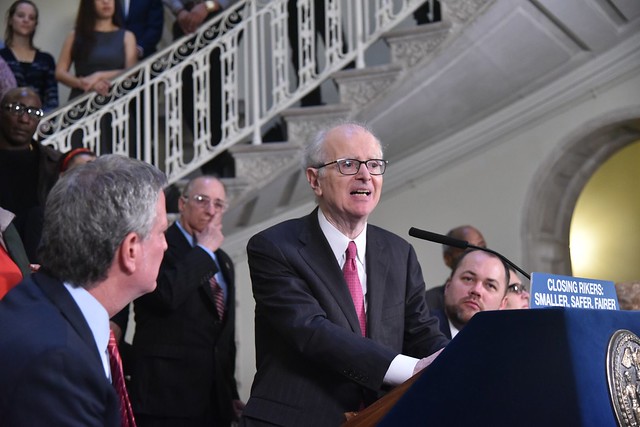 As the city eyes sites for the four borough-based jails that will replace the Rikers Island jail complex, some residents have sounded off concerns about negative impacts they believe local facilities may have on their neighborhoods. A new analysis may assuage some of those worries, finding that detention facilities in New York City have not, historically, had observable impacts on neighborhood property values or crime rates.

The study, conducted by the Independent Commission on New York City Criminal Justice and Incarceration Reform, which first crafted a plan for closing the Rikers jails, analyzed five operating or recently-closed city detention facilities using data from over 10,000 real estate transactions and 500,000 criminal complaints over the past decade.

It shows that areas within a five-minute walk of four existing adult detention facilities had property value trends and crime rates that matched comparable adjacent neighborhoods. The analysis also looked at what happened to these trends locally when a detention complex in Queens closed in 2001 and when one opened in Brooklyn in 2012. In both cases, property value and crime rates remained consistent with comparable surroundings, suggesting the placement of borough-based jails has little impact on those metrics.

“This study validates what we’ve been saying the whole time, that this old story that jails are damaging to the neighborhoods that they are in just doesn’t hold true,” Jonathan Lippman, chair of the commission and former New York State Chief Judge, told Gotham Gazette.

“There is absolutely no correlation between crime or declining property values and having local jails,” he added.

The new information is the latest development in the debate over how best to move forward on the plan to close the ailing Rikers Island jail complex and reduce the city’s inmate population in an era critical of mass incarceration and discriminatory policing. A poll released by the commission last month showed 59 percent of New Yorkers support the plan to replace Rikers Island with borough-based jails.

Contending with the zeitgeist of decarceration and criminal justice reform is the enduring struggle by some New York City residents to prevent what they view as dangerous facilities from setting down roots in their neighborhoods. Residents may recognize the importance of closing Rikers and utilizing borough-based jails, in part to keep defendants closer to the courts and their families, but often wonder -- aloud, at community board meetings, public demonstrations, and in open letters -- why their community must bear the burden. A nuance of that refrain, often coming from residents in historically underserved areas, suggests siting jails in their neighborhoods is another form of government divestment.

Local community boards representing the borough-based jail sites are all pushing back against the city’s plan, though the plan was crafted with the approval of each of the four local City Council members and the Council Speaker, Corey Johnson.

The commission was empaneled by then-City Council Speaker Melissa Mark-Viverito in 2016 after years of reports that Rikers Island is dilapidated, unsafe, and inhumane. Its stated goal was to study the possibility of closing the jail complex in the context of the city’s broader criminal justice system and make recommendations for change, which it did in March 2017. Just days before the commission released its report, and following pressure from Mark-Viverito and activists as he sought reelection, Mayor Bill de Blasio announced a ten-year plan to shutter the Rikers jail complex and replace it with local facilities, while significantly reducing the city’s incarcerated population.

Advocates, including the commission, believe borough-based jail facilities will go a long way in ameliorating the troubles plaguing Rikers both for the city and for the people incarcerated there and their families. The idea behind the borough-based jails is to bring incarcerated New Yorkers closer to the courthouses and to communities with access to public transportation, reducing the time and money it costs the city to transport inmates to court, helping the legal system run more smoothly, and easing the burden on families visiting loved ones. They would also bring incarcerated people closer to their lawyers and service providers.

At the same time, the plan is to wipe the slate of Rikers’ culture of violence, which has witnessed brutality by inmates and guards, and a well-documented history of inhumane conditions. The city has plans to site the four borough-based jails in Mott Haven in the Bronx, Boerum Hill in Brooklyn, Kew Gardens in Queens, and Lower Manhattan.

New York City currently has the capacity to house approximately 13,800 people in its jails, while the new facilities together would hold fewer than 5,000 people, according to the commission’s new report. There are approximately 7,800 people in New York City jails, according to the report (a spokesperson for the Mayor’s Office of Criminal Justice recently told Curbed New York that figure was just over 7,600), and the city wants to reduce that number to 4,000 by 2026 through a series of criminal justice reforms at the city and state level, like changing the bail rules that contribute to the mass incarceration of poor New Yorkers of color.

In March, the city began a single Universal Land Use Review Procedure (ULURP), which involves input from local stakeholders and gives a fair degree of discretion to local politicians, for all four of the borough-based jails. Critics have decried the use of a broad brush to paint the local impact of siting the jails, observing that the characteristics of each neighborhood are different and the effect of each facility on the community will be unique. Three of the four sites are on existing detention facilities, while the fourth, in Mott Haven, will be built on the site of a police tow pound. They must all go through ULURP because even the existing detention facilities will require rezoning to meet the city’s needs.

The commission shared the new report on property values and crime rates near jails with Gotham Gazette in anticipation of the upcoming ULURP hearings for borough presidents to express their positions, which begin in Brooklyn on June 6.

Another subject of concern for many residents is the potential increase of vehicle and foot traffic, and Nims acknowledged the commission had heard this at several of its public hearings. The commission does not plan to study the impact of detention facilities on traffic patterns, but Nims says the issue will be examined by the city during ULURP. “Traffic can be beneficial to a community,” he noted, referring to the potential increase in commerce that large and busy facilities might bring to local economies.

In addition to the four borough-based jails, the new report calls on the city to move away from the practice of housing people with mental health needs in its jails. “We call on the City to seek out alternative, non-jail locations for populations with discrete needs, including people with serious mental health diagnoses and people in need of drug and alcohol treatment,” the report reads.

The push for specially tailored facilities comes amidst broader calls for criminal justice reform to address the intersection between mental health and incarceration. Announcing a criminal justice platform last month, City Council Speaker Corey Johnson told an audience at John Jay College of Criminal Justice, “The health care system has turned away the chronically ill, and left jails as the public caretaker of last resort. But incarcerating people with mental health issues is a profound injustice, and something that we should never allow in our city.”

Lippman’s commission hopes the new data will lead people to reconsider assumptions about jails and land use. The former chief judge pointed to two examples he feels are illustrative where a detention facility had no discernible impact on neighborhood property values and crime rates: Downtown Brooklyn and Tribeca. In each case, “the neighborhood is thriving,” he said.