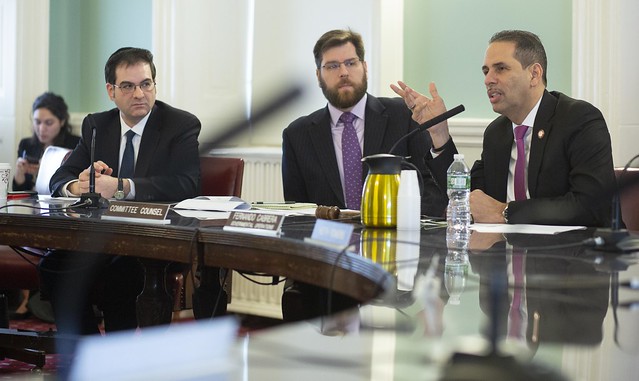 Significantly more public funding of political campaigns appears on the way given legislation that the City Council Committee on Governmental Operations passed on Tuesday.

The bill, sponsored by Ben Kallos, a Manhattan Democrat, aims to prevent corruption and increase engagement with local communities by adjusting the public matching funds system to allow candidates to raise only relatively small donations and receive enough public money to reach the spending limit in their race.

Though the bill has over 30 sponsors in the 51-seat Council and passed the committee 4-1 on Tuesday, a last-minute amendment to the legislation caused a significant stir, including accusations of impropriety by Comptroller Scott Stringer against City Council Speaker Corey Johnson, both likely mayoral candidates in the next election.

Expected to be passed by the full Council on Thursday, the bill lifts the cap on how much public funding – or taxpayer money – a participating campaign can receive from Campaign Finance Board. The cap, currently set at 75 percent of the spending limit for participating candidates, would rise to 89.9%, effectively making it a full match relative to the spending limit when the private funds involved are also taken into consideration.

The city’s campaign finance system currently has two tracks, “Option A” and “Option B,” that only apply to the 2021 election cycle, before the newer of the two programs takes full hold. That program, “Option A,” includes lower individual donation thresholds and matches the first $250 of individual contributions at an 8-to-1 ratio for a maximum disbursement of $2,000 in public funds per contribution.

These rules are the result of a November 2018 referendum that both raised the disbursement cap and increased the public matching ratio. But it also left in place the old system, which has much higher contribution limits and matches the first $175 of donations at 6-to-1.

Different offices, from citywide posts like mayor and comptroller to borough presidencies to City Council seats, have different donation and spending limits.

The change to individual contribution limits in Option A dropped the maximum donation limit from $5,100 to $2,000 for citywide candidates who opt into that program.

Related to that new donation cap, an amendment to the legislation being passed this week has caused a rift among mayoral candidates and raised eyebrows around city government.

The amendment requires candidates who opt into the new system to return contributions from 2018 that go over the new maximums, which could mean a $3,100 return on each maximum donation for participants.

The November referendum allowed candidates participating in the system to choose between the new rules – with the higher public match but lower contribution limits – and the old rules until 2022, when candidates will have to conform entirely to the new rules to receive public funds. The 2021 city elections are expected to be highly competitive, crowded affairs, with almost all city seats open due to term limits.

Comptroller Scott Stringer, one of several likely mayoral candidates in the upcoming election, would be particularly impacted by the amendment. He’d have to return many thousands of dollars in campaign donations from the past year if he wanted to opt into the new matching system. As first reported by the Daily News, Stringer viewed this amendment as a “brazen power grab” by fellow mayoral candidate and Council Speaker Corey Johnson.

“The voters passed a groundbreaking campaign finance system to clean up government, not corrupt it,” a Stringer spokesperson said. “Speaker Johnson is trying to circumvent the will of the voters and change the rules to benefit himself. The Council should reject his brazen power grab.”

A spokesperson for Johnson reiterated that it’s optional for candidates to return their contributions and said that the amendment was created at the recommendation of the CFB.

“The changes were made at the strong urging of the CFB. Both because of fairness and administrative efficiency,” Jennifer Femino, a spokesperson for Johnson, said. “That said, no contributions made in a prior election cycle will have to be returned. Any candidate who wants to keep their big money donations from the last cycle is free to do so and maintain their edge over the competition.”

Council Member Kallos stressed to Gotham Gazette that not only did the CFB recommend retroactivity because it would then make administration of the program easier, but that Kallos led an extended conversation on changing the bill to include retroactivity during the initial April hearing on the legislation. The amendment wasn’t made until just days before the committee vote, however.

On Tuesday, governmental operations committee member, Keith Powers, a Manhattan Democrat, referenced the Stringer-Johnson rift during the hearing, though he didn’t name either of them. He said he was “certainly sensitive to the concerns that have been raised amongst those who are current candidates that feel this bill has a negative impact on them,” but remained supportive of the bill and voted yes.

There was opposition to the bill at the hearing, from City Council Member Kalman Yeger, a Brooklyn Democrat. He said it disregards what the voters decided with the 2018 referendum and amounts to little besides another big dip into taxpayers’ pockets.

“It doesn’t seem to me that when the voters voted in November, they put an asterisk next to their vote and said, ‘Hey, this is what we’re voting for, but just in case you get a chance, take some more money out of our pockets and do this a little better,’” Yeger said. “I don’t think we got that message. I didn’t get that message, that’s not what I heard. What I heard was, there was a yes/no question, and the yes won.”

Yeger was the sole no in the 4-1 vote, with Council Members Kallos, Powers, Alan Maisel, and committee chair Fernando Cabrera voting to approve. Two committee members were absent from the vote: Council Member Ydanis Rodriguez and Bill Perkins.

The bill now goes to the full Council for a vote on Thursday. If it passes there, it will go to Mayor Bill de Blasio for likely approval.