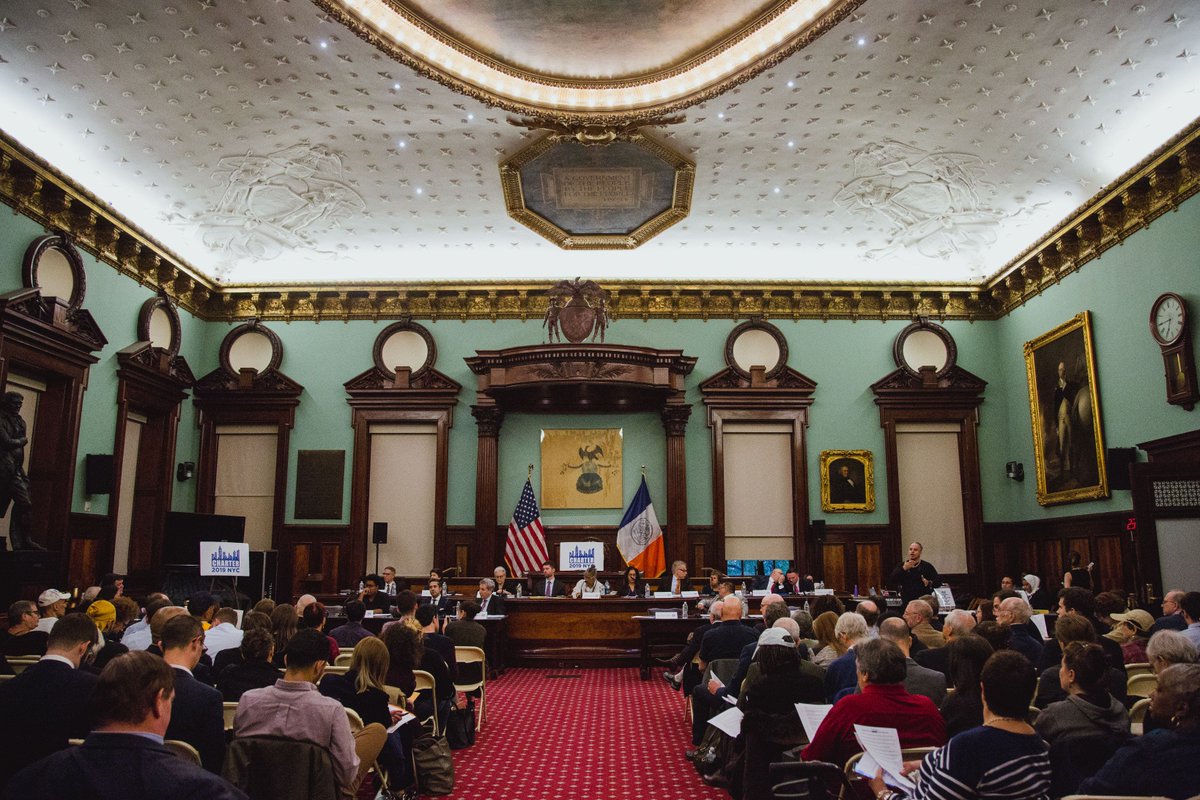 After a nine months-long process of public hearings, private meetings, and spirited discussion, the 2019 Charter Revision Commission approved 17 proposals for the November ballot on Wednesday evening.

Commission staff will draft ballot language for these proposals and the commission will take a final vote to approve the proposals on July 24. It will have one more meeting - on Tuesday, June 18 - to discuss adding other proposals to the list.

Potential changes to the city’s central governing laws and constitution -- the city Charter -- the proposals include items like ranked-choice voting, bolstering police oversight, and city budget reform. Most of the proposals chosen by the 15 commissioners were based off the preliminary staff report released in April, which narrowed considerations after a series of commission meetings. Following the report’s release, the commission held a final round of public hearings, one in each borough, as well as private deliberations before Wednesday night’s public vote by the commissioners at City Hall.

Commissioners further placed considerations into five ballot groupings: elections and redistricting, Civilian Complaint Review Board (the NYPD oversight body), governance, finance, and land use. There were 18 total proposals for consideration by the commission. One proposal failed to pass and two passed on the condition that revisions by commission staff be made, which will be verified by the commission soon.

The commission staff will now start to draft ballot language to be submitted to the City Clerk and then Board of Elections, with voters able to approve or disapprove of each grouping through “yes” or “no” votes on the November 5 ballot. But before the commission’s recommendations are finalized and ballot language fully drafted, the commission will have one more public meeting, on June 18, to make any other final decisions.

Here’s what was decided Wednesday night:

Elections and Redistricting
One of the commission’s top issues of interest since its formation was ranked-choice voting, which commissioners voted to approve at Wednesday’s meeting. This voting system is aimed to limit costly run-off elections, which typically see low voter turnout, while also ensuring that winners of crowded races have broader support.

Under the RCV system, voters rank up to five candidates (including write-ins) by order of preference. If a candidate receives a majority of first-place votes, they are the winner. If not, the candidate with the fewest first-place votes is eliminated and the voters who chose that candidate first have their second choice receive their vote. The elimination process is repeated until one candidate reaches the majority threshold. The commission decided that RCV would be suggested to voters for primary and special elections, but not general elections.

Currently, there are only run-offs for citywide positions where one candidate does not hit 40% of the vote, otherwise in all other races whichever candidate receives the most votes wins. This system has led to expensive, low-turnout run-offs in the 2009 and 2013 Democratic primaries for Public Advocate, and it has led to winners of Borough President and CIty Council races who enter office having secured well below a majority of the vote.

Ahead of the commission’s meeting, 27 elected officials – including Comptroller Scott Stringer and Manhattan Borough President Gale Brewer – and 14 organizations released a statement urging the commission to put ranked-choice voting on the ballot.

"I urge the Charter Revision Commission to include ranked choice voting for all of our elections in its recommendations for the November ballot. Ranked choice voting has proven effective elsewhere and would make our city's elections more fair and representative of the true will of the people," Council Member Jimmy Van Bramer said in the statement. "Our current winner-takes-all system is flawed and in need of reforms. We should not allow candidates to win races with only a small plurality of the electorate, and we should do all that we can to avoid ridiculously expensive, low turnout run-offs. Allowing voters to rank their preferences on the ballot will ensure that the winner is actually a consensus choice."

Although most charter commissioners agreed to move ahead with ranked-choice voting, some felt that because the proposal would only apply to primary and special elections, it wouldn’t accomplish enough. Commissioner Stephen Faila proposed an amendment that would include general elections, but it didn’t pass.

There were also those in opposition to the underlying proposal, like commissioner Merryl Tisch, who called RVF a well-intentioned experiment, but said she could not support it because it could allow politicians to have unclear positions for the sake of garnering more votes.

“If we enacted such a system it could well give candidates an incentive not to take clear issue positions, preferring to play to the audience for being everyone’s second choice, by offending as few people as possible, to rack up second and third choice votes,” Tisch said.

The final approved elections and redistricting ballot proposal amends the timing for establishing Council district boundaries to ensure that there’s sufficient time after redistricting and before the start of the ballot petitioning period for the next election.

One proposed change is to how CCRB members are appointed. Currently the mayor appoints all 13 members, but the proposal expands the board to 15 members. Under this expansion, one of the members would be appointed by the Public Advocate and the other would be jointly appointed by the Mayor and the City Council Speaker. The City Council would also be granted power to directly appoint people to the board, currently the Council can only designate members.  (The commission had decided not to move ahead with the idea of a popularly-elected CCRB, as was urged by some advocates.)

The commission also voted to recommend a requirement that the Police Commissioner provide an explanation in all cases where the commissioner intends to depart from the board’s disciplinary recommendations and that the CCRB be allowed to delegate its subpoena power to the CCRB Executive Director.

There was debate over another CCRB consideration, which would require that the CCRB budget be no less than 0.3% of the NYPD’s multi-billion-dollar budget. Commissioners decided to have staff rework some of the proposal’s language and discuss it further at the June 18 meeting.

The only proposal that did not pass was the one regarding false official statements in CCRB matters. It allows the CCRB to investigate and recommend discipline against a police officer at the subject of a CCRB complaint, if said officer makes a false material statement within the course of that investigation.

Finance
The commission approved proposing to voters the creation of a mandatory “Rainy Day Fund” for city budgeting, where the city government can put surplus revenues when the economy is booming and draw down savings when in a crisis or significant downturn.

The idea behind the fund, strongly recommended by entities like the nonprofit Citizens Budget Commission, is that in cases of major economic hardship, service cuts and tax increases are avoided. This proposal would be reliant on the expiration, repeal, or amendment of the State Financial Emergency Act, which, since the city’s fiscal crisis of the 1970s, is a state law governing city budgeting practices.

Voters would approve the creation of a Rainy Day Fund with certain specific criteria, but it would only be created if state law was amended to allow it.

Charter Commissioner Stephen Fiala, who said this proposal was his top priority on the commission, said it is important because it protects lower- and middle-class people, as they are typically impacted the most by city service cuts and tax increases.

“If there was nothing else that we did, this is the most important thing we will have done. And it isn’t about numbers...,” said Fiala, who was appointed to the commission by Staten Island Borough President James Oddo. “This is really about the poorest of the poor and the middle class because they are the ones who have – from the time we started having recessions until now – they’re the ones who always suffer.”

“By putting a Rainy Day Fund on the ballot, the charter commission would provide New Yorkers with an important opportunity to strengthen one of the few flaws in the city’s budgeting processes and would create significant momentum for the changes needed in state law,” Andrew Rein, president of Citizens Budget Commission, wrote in a June 10 op-ed at Gotham Gazette.

Governance
Voters will also see a proposal on the appointment of the city’s Corporation Counsel, or top lawyer, which provides for the counsel to be nominated by the mayor with City Council approval.

Another proposal would restructure the Conflicts of Interest Board. COIB members are currently appointed by the mayor with the advice and consent of the City Council. The restructure provides for two mayoral appointees, one Comptroller appointee, and one Public Advocate appointee.

The commission also approved a proposal to require the citywide director of the minority- and women-owned business enterprises (MWBE) program report directly to the mayor and that this director be supported by a mayoral office of MWBE.

Although the proposal passed, some commissioners noted that this still doesn’t accomplish enough, and a chief diversity officer for the city would be the ideal solution.

“Enshrining an office of minority- and women-owned businesses in the city’s charter is really only a small step forward that does not match the scale of the problem that we are facing,” Commissioner Allison Hirsh, appointed by Comptroller Scott Stringer, said. “While we must support every effort to improve diversity in our city, by merely enshrining an existing initiative into law, the office of M/WBEs is ultimately a little disappointing in terms of what we could have accomplished on this commission.” Stringer has made the push for a citywide chief diversity officer and a CDO at each city agency his top priority in charter revision, but the commission is not heading in that direction.

Land Use
The commission also voted on suggesting reforms to land use procedures, specifically by modestly increasing community involvement. One recommendation moving ahead is to provide more time and earlier opportunity for Community Boards and Borough Presidents to review and comment on applications before the start of the Uniform Land Use Procedure (ULURP), the process that determines if the city will allow a particular land use change.

The commission will suggest to voters an extension of the ULURP pre-certification notice period and require project summaries be transmitted to affected Borough Presidents and Community Boards. There was an amendment that would extend this period from the originally proposed 30 additional days to 60 days, but commission members said this would extend an already lengthy process too much further.

“I think there are places and ways in which ULURP could use some fresh air on all sides, we all know that community boards are not all equal; they do not all use their time periods well, but to establish a pre-ULURP ULURP just seems to me to avoid the question of ‘what’s wrong with ULURP,’” said commission Chair Gail Benjamin, the former head of the City Council’s land use division and appointee to the commission of Council Speaker Corey Johnson.

Although the amendment failed, the underlying proposal passed. Commissioners also approved  to give community boards 90 days to review ULURP applications, rather than the current 60 days, before they issue a non-binding opinion.

June 18 meeting
Commissioners will meet again on June 18 to finalize two proposals (unless the two are finalized before the 18th) and any proposals not outlined at Wednesday’s meeting, which focused on moving ahead, or not, with the recommendations in the preliminary staff report.

Commissioners voted Wednesday that there should be a guaranteed budget for each of the CCRB, Borough Presidents, and the Public Advocate, but on June 18 they will vote on details of those budget requirements. The commissioners may come to a consensus prior to the June 18 meeting and then a vote won’t be necessary.