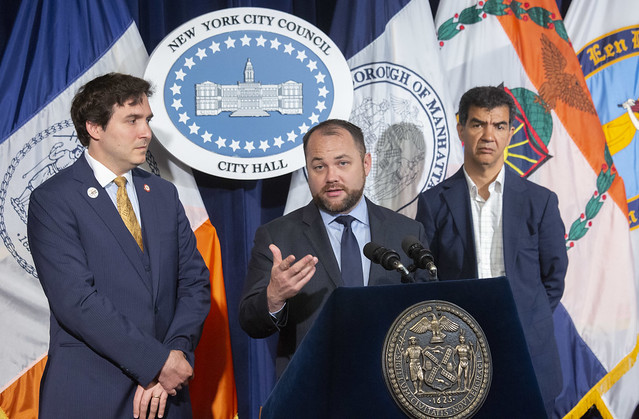 The City Council passed a much-anticipated, controversial campaign finance bill Thursday, raising the cap on how much public funding a campaign can receive and altering other dynamics of the city’s matching system. The bill -- the source of significant consternation over the past several days, particularly among likely 2021 mayoral candidates - passed by a vote of 41-6, with one abstention, and three absences.

The legislation, which Mayor de Blasio has indicated support for, increases the public matching funds ceiling so that campaigns are able to raise only smaller donations and still have enough money to hit their spending limit. It also has a retroactivity component, a bill change within just the past 10 days, that caused a stir and appears likely to impact several upcoming races, including the Democratic primary for mayor.

City Council Speaker Corey Johnson, a likely 2021 mayoral candidate, and City Council Member Ben Kallos, the lead sponsor of the bill, defended the legislation, including retroactivity that will make candidates return money raised in 2018 above new lower donation limits if they choose to opt into the newer of two programs that has more public matching.

“We are literally doing something that is entirely consistent with what we did three months ago and now all of a sudden we are being criticized for it,” Johnson said at the press conference, referring to actions the Council took to make new campaign finance rules approved by voters last year apply to the special election for Public Advocate.

Johnson, who pledged in January not to take any donations larger than $250 as he explores a mayoral run, said he has long supported the legislation and it has nothing to do with the race. He and Kallos also pointed out that the retroactivity component was discussed during an April hearing on the bill and recommended by the Campaign Finance Board so that an entire four-year election cycle would be run by the same rules, for whichever of the two programs candidates choose.

Still, neither Kallos nor Johnson had a clear answer for why the amendment to the bill had come so close to the Council’s votes on the matter.

Johnson noted the difficulty in creating legislation that affects lawmakers themselves.

“It’s hard to vote on these things because every time you do you’re potentially affecting yourself and your colleagues in what you do. It’s one of the challenging things you deal with as a current elected official when you start to look at the system that exists and you seek to improve it or change it,” Johnson said.

“For the current election cycle, just like we did for public advocate, when no one criticized it, you need to pick option A or option B,” Johnson said at the press conference. “No one is being forced to opt into the 8-to-1 [matching] system. We are just saying if you are going to opt into one system, be consistent throughout the entire cycle,” Johnson said.

If Stringer or others opt into the new system, they would receive its 8-to-1 match on all qualifying donations $250 or under, but under maximum individual donations of $2,000 (down from $5,100 for citywide candidates), and they would, based on the new Council bill, have to return the difference on any donations above the new maximum. That last aspect is what has driven Stringer and others to call Johnson out.

Others have criticized the bill for using more taxpayer money.

“I’m not sure how we look a homeless person in the eye and tell them we can’t find them an affordable place to live but don’t worry we have money for our next campaign mailing,” Council Member Kalman Yeger, a Brooklyn Democrat, said on the Council floor before the vote. He voted no, as he had done in committee on Tuesday.

Supporters of the bill pointed out it’s potential to decrease the power of special interests and large donors in politics.

“I can’t believe we’re standing here having an argument over how much big money people should get to take after the voters said they want politicians to get less big money,” Kallos said at the press conference.

“I don’t think I’ve ever had anyone say to me ‘I don’t want my dollars matched.’ The public match is increasing participation and the taxpayers, the residents actually like it. They like having their voices amplified and direct access to elected officials that they otherwise wouldn’t,” Kallos added.

“There’s a lot of cynicism in government because people feel like big donors have too much access in government, and here’s a way to take big money out and have it be publicly financed,” Johnson said at the press conference.

Representatives for Stringer, who would likely have to return the most money under the new system, if he sticks with the program of lower donation limits and higher matching, called Johnson amending the legislation and pushing it through a “brazen power grab” and using his government position to advantage his campaign.

“Johnson is rushing through a law that explicitly benefits him,” wrote Stringer spokesperson Tyrone Stevens on Twitter. “It’s deeply unethical and it’s not good government. Shame on him.”

"I’m a firm believer you don’t change the game in the middle of the game,” Adams told the Max & Murphy podcast on Wednesday, “...any major changes in the system should not be beneficial to any party involved. And I think that’s part of what Scott Stringer was saying." Adams said he wasn’t yet sure which of the two campaign finance programs he’ll choose.

A spokesperson for Diaz Jr. did not respond to a request for comment.

At the Council on Thursday, among those voting no was Yeger, who sits on the Committee on Governmental Operations, which first heard and passed the bill, sending it to the full Council. Joining Yeger in opposition were Council Members Mark Gjonaj and Ruben Diaz, Sr., both Bronx Democrats, and the Council’s three Republicans: Council Members Eric Ulrich, Steven Matteo, and Joseph Borelli.

Council Member I. Daneek Miller was the sole abstention. Council Member Ydanis Rodriguez, who was absent for the committee vote on Tuesday, was also absent for the vote by the Council, despite having been present during the press conference preceding the full Council meeting.