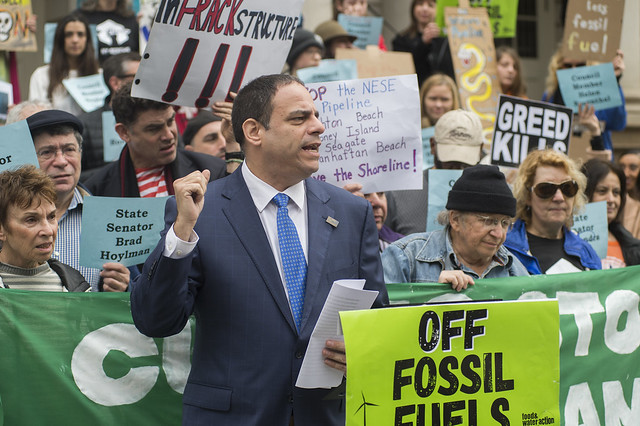 At a recent hearing of the City Council Committee on Environmental Protection, the de Blasio administration expressed its opposition to a bill that would establish a New York City Department of Sustainability and Climate Change.

The bill, Intro. 1399, was introduced in February by Council Member Costa Constantinides, a Queens Democrat and chair of the environmental protection committee.

It would make New York City among the first in the nation to implement a municipal-level agency dedicated to sustainability and climate change, according to Constantinides, and would repeal the Mayor’s Office of Sustainability and replace it with the new department, led by a commissioner. This change, going from part of the mayor’s office to a separate department, would likely mean more funding and staff for the responsibilities involved, signifying greater emphasis on the city’s efforts to fight climate change and prepare for its effects.

The commissioner of a Department of Sustainability and Climate Change would be responsible for all matters pertaining to recovery, resiliency, and sustainability, the three main pillars of the work involved as the city takes additional efforts to deal with and fight climate change. The department would develop and coordinate the implementation of policies, programs, and actions to meet the long-term needs of the city.

The proposed bill would also establish a Sustainability Advisory Board with members to include, at a minimum, “representatives from environmental, environmental justice, planning, architecture, engineering, oceanography, coastal protection, construction, critical infrastructure, labor, business, and academic sectors.” Most members would be appointed by the Mayor though it would also include the Speaker of the City Council and the chair of the Council’s Committee on Environmental Protection or their designees.

“It’s time for us to make as a city a larger investment, a deeper investment, and one that when this mayor leaves, and when this City Council leaves, that we’re leaving behind a stronger apparatus, an apparatus that would be in perpetuity in relation to climate change,” Constantinides said during the hearing.

But Mark Chambers, the director of the Mayor’s Office of Sustainability, testified before the Council committee at the June 12 hearing, which also dealt with two other bills related to reducing methane emissions and leaks in the city, and expressed the de Blasio administration’s opposition to the bill to create a new department.

“Having said that, while the administration believes that our current climate teams are structured appropriately to meet the challenge, New York City residents need every tool at our disposal in this fight,” he continued. “We share your goals that were put forward in Intro. 1399 to prepare New York City for the impacts of climate change, build a more sustainable city and effectively respond to and recover from climate emergencies. In the coming months, we look forward to discussing strategies for effectively meeting these goals together.”

“I completely agree that doing more is not only advantageous but it’s absolutely necessary. To your original point about the benefits of making sure there is a legacy of this work, making sure that it has to continue, one of the hallmarks of our approach to our climate work is codifying it wherever possible,” Chambers said in his testimony. “So it’s not just working with the Council, it’s also with changing the energy codes, changing the building codes, changing the zoning codes to make sure that it is not subject to just prioritization but it’s become a culture of how we do work internally in the city as well as how the city at large has to redefine our environment.”

Constantinides acknowledged the work that the mayor’s office and the City Council have done to address climate change, its threats and impacts, but said the city needs a single agency to act as a conduit for all resiliency work moving forward. “The men and women of MOS and MOR have done an outstanding job and I want to thank them for that,” he said in his opening statement. “We cannot expect, however, that the several dozen employees in this office have the capacity to manage the sustainability policies for the over 300,000 strong city workforce. We want to give them more help.”

The new department would implement and monitor sustainability initiatives in New York City that have been launched in recent years such as the city’s commitment to an 80% reduction in carbon emissions by 2050 and the city’s initiative to install 1 gigawatt of solar capacity citywide by 2030 -- enough to power 250,000 homes -- among many others. Led by Constantinides, the City Council just passed, with de Blasio’s support, sweeping legislation to mandate major carbon emissions reductions and green upgrades at the city’s largest buildings, and the de Blasio administration is moving ahead not only with continued recovery efforts from 2012’s Hurricane Sandy, but new resiliency efforts like the Lower Manhattan Coastal Resiliency Project.

Additionally, the commissioner must prepare and submit to the mayor and the speaker of the City Council an initial report on the city’s performance with respect to the identified sustainability indicators and long-term planning and sustainability efforts no later than April 22, 2020.

At the hearing, Constantinides asked Chambers how a new mayor would affect the Mayor’s Office of Sustainability’s current $17 million budget. “The discretion would still stand with the mayor, whether it’s agency or whether it’s mayoral office,” Chambers responded.

After Chambers and other representatives of the de Blasio administration testified, members of the public appeared before the Council to discuss the bills at hand, raising some questions about the proposed department bill.

“I’m concerned that there do not appear to be any enforcement mechanisms if agencies fail to meet their stated goals,” said Amy Ruther of the New York City chapter of the Democratic Socialists of America. “I’m also concerned that the members of the Sustainability Advisory Board are all appointed, not elected, and they are not required to seek input from the communities that their decisions will impact the most.”