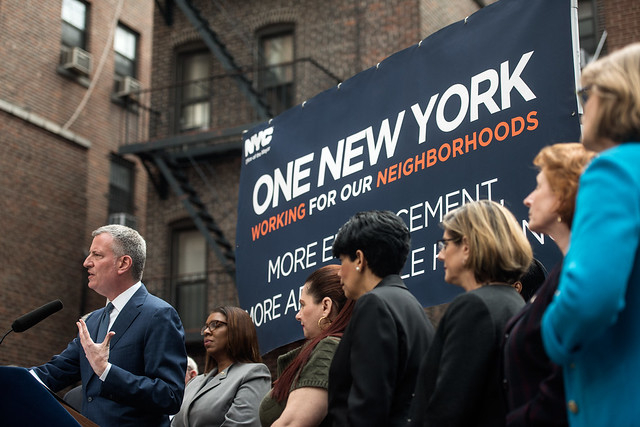 The de Blasio administration is hoping to address challenges faced by struggling New Yorkers and fight poverty by improving access to city services through five new initiatives that will launch July 1, the start of the next city fiscal year.

The five projects, overseen and funded by the Mayor’s Office for Economic Opportunity, cut across city agencies and involve a diverse set of goals: increasing school attendance for students in temporary housing; expanding education services for adults leaving jail and prison; improving staff training at and design of domestic violence shelters; improving how the city tracks services for homeless people living on the street; and enhancing the city’s family support service system.

“Many folks in the world of social services, whether at nonprofits or city agencies…are all in general agreement that silos are bad,” said Matt Klein, executive director of the Mayor’s Office for Economic Opportunity, which uses data and research to fight poverty-related challenges faced by New Yorkers. “Issues related to poverty are multi-faceted and complex so this is an effort to put into operation the principle that we should serve people more holistically as opposed to single isolated interventions.”

Klein’s office put out a call to city agencies last September to solicit ideas about improving collaboration and overcoming “service silos” to provide more efficient and well-rounded social services. The projects will receive a total of $6 million over the next three years from NYC Opportunity’s Innovation Fund, a $28 million pot of money that the office uses to test new projects and ideas to tackle poverty. The office also publishes its own measure of poverty, which takes into account additional cost of living factors in the city to provide a more coherent picture of poverty than the federal measure.

Though Mayor Bill de Blasio has committed to fighting poverty and income inequality in the city, having won office on that platform in 2013, any city administration has somewhat limited tools to directly achieve what is largely affected by macroeconomic factors.

The mayor has taken many related steps to support the lives of no-, low-, and middle-income New Yorkers, including enacting universal pre-kindergarten, various workplace protections like expanding paid sick leave, increasing the minimum wage for city employees to $15 (before the state followed suit for all workers), funding lawyers for many tenants facing eviction, and a large affordable housing program. De Blasio has also claimed success, announcing earlier this year that there were 236,500 fewer people living in poverty or near poverty in 2017 than in 2013. Poverty rates have been falling nationwide, owing to strong and stable economic growth over the last decade, and it’s hard to attribute the effect solely to city policies. The fact that the minimum wage jumped quickly over the last few years has been a significant factor in New York.

NYC Opportunity’s projects are intended to make improvements in the systems that the city does control, in providing social services and easing access to them. The projects include:

A partnership between the Department of Education and Department of Homeless Services to increase coordination and data-sharing to increase attendance rates for thousands of students living in 25 homeless shelters across the city.

Improving 15 domestic violence shelters through environmental design changes and better training for staff to provide trauma-informed care. That project will involve the Department of Health and Mental Hygiene, the Human Resources Administration and the Administration for Children’s Services.

ACS and DOHMH will also work together to analyze how families interact with city services to find ways to “refine referral pathways, improve families’ access to services, and promote positive child outcomes.”

The Department of Homeless Services will improve how it tracks street homelessness by expanding its StreetSmart tracking and case management system to Drop-In Centers and Safe Havens which provide services to those outside of the shelter system. DHS will also give nonprofit service providers better access to data to improve services.

The projects are meant to be scalable and to provide lessons in best practices. For instance, the domestic violence shelter project acknowledges “both the relation between physical design and programmatic effort to address trauma,” said Klein. “That could also be precedent setting in the development of public spaces. All of these have potential for very meaningful operational change.”

David Berman, the office’s director of programs and evaluation, added, “As part of the selection criteria, we particularly focused on projects that could have a big impact on low-income residents but also to potentially transform systems or provide informative learning for other city agencies so that they would have a bigger impact.”

Berman said the office will apply performance tracking measures to each of the projects to measure process and outcomes, and will publicly report the results. “We’re continuously working with our agency partners to monitor the programs as they go,” he said.