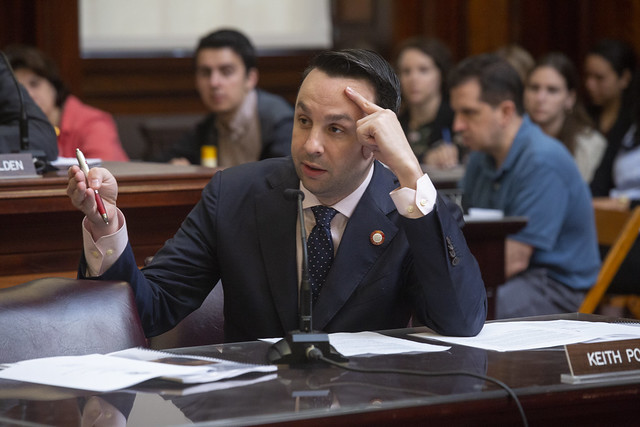 The City Council’s Committee on Governmental Operations held a hearing Wednesday to discuss three bills related to campaign finance reform. Two of the bills would prohibit candidates convicted of felony corruption or misuse of public funds from receiving public matching funds and reduce the matching funds contribution minimum from $10 to $5. They are sponsored by Council Members Fernando Cabrera and Keith Powers, respectively. Cabrera is the chair of the governmental operations committee.

The third bill, also sponsored by Powers, would amend the definition of “business dealing with the city” to include an earlier trigger in the land use review process. That bill would make those entities with uncertified applications under the Uniform Land Use Review Procedure (ULURP) and zoning text amendments part of the “doing business” database that severely limits what they can give to political candidates, with the goal of decreasing the influence of large real estate contributions in elections and the opportunity for pay-to-play politics.

The hearing included testimony from representatives of the New York City Campaign Finance Board (CFB), which runs the city’s public matching system and trains, monitors, and audits campaigns; and Reinvent Albany, a good government advocacy group. Each of the bills is based upon recommendations filed by the CFB in its 2017 post-election report.

In 2017, a candidate participating in the city’s matching system, Hiram Monserrate, who received public funds had previously served 21 months in prison for using government funds to pay campaign staff.

“Ensuring individuals with a track record of fraud do not receive public funds is not only good public policy but is fundamental to the integrity of the matching funds program,” CFB Executive Director Amy Loprest said at the hearing.

While supportive of the bill, Loprest suggested that the Council could do more to ensure that public funds are not given to those who have a track record of misusing them. She encouraged the Council members to extend the bill to cover misdemeanors related to corruption, and to specify the language of the bill to explicitly tie previous crimes to an individual’s actions as a candidate or office-holder.

Loprest also suggested that the committee implement sunset clauses of five years for misdemeanors and 10 years for felonies, after which a candidate would again be able to receive matching funds.

Lowering of Matching Funds Contribution form $10 to $5
To qualify for the city’s public financing program, candidates must meet a two-part fundraising threshold. Depending on the office sought, candidates must receive a certain number of contributions of at least $10. This bill would lower the requirement to qualify for the threshold from $10 to $5.

Currently, all contributions are eligible for public matching, but contributions under $10 do not count towards meeting the threshold to receive public funds. Critics of the current system argue that a minimum contribution of $10 can impose too significant a burden on New Yorkers from economically-disadvantaged areas of the city. For candidates seeking to represent these areas in local elections, achieving the minimum number of contributions to reach the threshold can be a challenge exacerbated by the high minimum.

The campaign finance board discussed lowering the minimum to $1, but determined that $5 was “a balance between showing serious support and the financial burden from people from certain districts,” Loprest said at the hearing. The city typically encounters few $1 contributions, she said.

“Lowering the amount to $5 would allow more residents to participate in helping their favored candidates qualify for matching funds, and more candidates would be able to meet the threshold sooner in the election year,” Loprest said at the hearing.

“For large-scale elections in the city it would be an easier way to encourage people to get into the matching funds program,” Council Member Powers said of his bill.

Amending the Definition of “Business Dealings”
The third bill discussed would place limits on contributions to candidates running for office from persons with “business dealings” with the city.

Amending the definition of “business dealings” will allow the city to include those who have filed an application but have not yet been certified by the City Planning Commission to hold them to the same standard as those who have already been certified. Maximum contributions to candidates vary based on the office sought, as do the much lower doing business limits. For example, the maximum donation someone on the doing business list can give to a candidate for mayor is $400.

Including applications that are not yet certified in “business dealings” is “an effective way to ensure that the matching funds program is doing everything it can to curb both corruption and the appearance of corruption,” Loprest said at the hearing.

In all other “business dealings,” with the city, people are compiled into and remain in the city’s doing business database for one year after the end of the transaction. This management system allows the campaign finance board to determine if a contribution is within the applicable limit. Loprest testified that land use application under the ULURP coverage period should also remain in the database for one year.