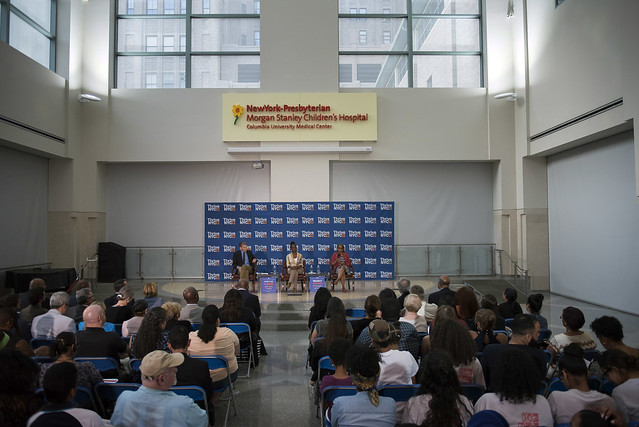 Five leaders in criminal justice and mental health discussed wide-ranging options to keep seriously mentally ill people out of the prison system during a panel discussion held by the Greenburger Center for Social and Criminal Justice last week at Baruch College. Two out-of-state panelists, from Arizona and Florida, elaborated on initiatives in their states that have not made it to New York.

The discussion took place just a week after the New York City Council held an oversight hearing on recidivism for those with serious mental illness and what to do about it, and not long ager the New York State Assembly and State Senate unanimously passed legislation to create a commission to explore further state investment in underfunded mental health housing programs.

Each panelist was invited to speak on one particular specialty or accomplishment in their career related to diversion or redirection from prison for those with mental illness. The panel was part of a series called “After Rikers,” which the Greenburger Center is organizing to discuss how those with serious mental illness will fare once the jails on Rikers Island eventually close.

Jaffe discussed a way, assisted outpatient treatment, in which the courts can order someone with a serious mental illness to participate in community-based mental health care services before they become violent. AOT, otherwise known as Kendra’s Law in New York, was pioneered by New York in 1999, an effort in which Jaffe was instrumental (Roberts introduced Jaffe as the “Father of Kendra’s Law”).

“Kendra’s Law is simply the single most effective program that the city has or the state has for the seriously mentally ill,” said Jaffe. Serious mental illnesses, which plague an estimated 239,000 New Yorkers and 4% of the U.S. population, are advanced diagnoses, typically schizophrenia, bipolar disorder, or major depressive disorder.

AOT is utilized for those who have rejected treatment or shown violent tendencies in the past but whose loved ones or psychiatrists can petition for a court-ordered treatment program. In essence, Kendra’s Law is aimed at preventing people suffering from serious mental illness from committing violent crime, in the vein of the namesake incident whereby Kendra Webdale died in 1999 after being shoved in front of a New York City subway by a man untreated for his schizophrenia.

The population of people eligible for assisted outpatient treatment is relatively small – currently fewer than 1,400 people are under court-ordered treatment programs, although Jaffe estimates that number should be closer to 4,000 if New York provided more resources and was more appropriately aggressive in the use of Kendra’s Law to keep dangerous people in treatment.

Barto, of Arizona, discussed her recent legislation to create a secure community residential program that provides long-term housing placements for those who have resisted help and failed traditional housing programs.

“The goal is to enable a person to not walk away from treatment due to their illness, which is happening in an unsecure setting so often,” said Barto. The facility will be “secure” as in the patient will be unable to leave the gated facility until his or her program terminates.

Barto agreed with Roberts’ assessment that the facility is “a civil commitment to a community-based locked facility or house rather than an institution.”

Nationwide, the mental health field has shifted away from inpatient care (i.e. psychiatric hospitals or “insane asylums”) and towards community-based outpatient methods.

Currently, New York offers some supportive housing options similar to Barto’s legislation. Both New York City and State have programs to build thousands of additional units of supportive housing in the coming years, allowing more individuals to receive mental health care and other social and medical services where they live.

Leifman, of Florida, discussed two major initiatives: the implementation of Crisis Intervention Teams (CIT) and the creation of a $42.1 million “one-stop shop” mental health facility. The facility -- full of programming, short-term residential beds, crisis intervention teams, and tattoo removal services -- is designed for those with mental illness who may not recognize the severity of their sickness and go through the treatment system many times.

Through the CIT training program, Miami-Dade trained 6,700 police officers representing each department in how to handle an emotionally disturbed person during a crisis. A similar training has been slow to take hold in New York City, where as THE CITY reported, just 11,970 of the NYPD’s 36,753 uniformed cops have been trained to handle EDP calls as those calls have jumped to 180,000 last year.

Furthermore, Miami-Dade recently created CIT 3.0 as a result of the shooting at Stoneman Douglas High School in Parkland on February 14, 2018. The program, called a threat management unit, has detectives daily go through every call to the CIT program and look for indicators for threats of violence which leads to an officer checking in on the caller.

D’Emic, of Brooklyn, deals with mentally ill individuals after they have committed a crime. His court, started in 2002, is referred mentally ill offenders and he decides if they go through a mental health program instead of jail or prison. It’s this type of alternative to incarceration that many believe should be the model, but must be matched with good mental health care and careful oversight.

Schiraldi spoke about what to do with people after they leave prison. He worked closely on the recently failed bill in Albany entitled the “Less is More Act,” which would prohibit New Yorkers on parole from being re-incarcerated for smaller technical violations of parole such as being late for curfew.

A former Commissioner of the New York City Department of Probation, Schiraldi took a largely critical stance on the entire probation system, saying: “there is not a lot of strong evidence that probation and parole has an impact on public safety or rehabilitation. If this was a medicine, doctors would stop prescribing it.”

“The major reason it will exist tomorrow is because it existed yesterday,” he said.

There was one point of disagreement during the panel: Jaffe was much more bearish on the impact of peer groups on mental health than the rest of the panelists. A question from guest moderator Valentina Morales of The Fedcap Group asked how involved people with lived experience should be in the planning of mental health programs. Each panelist took the chance to praise people with mental illness who’ve completed mental health programs and work with ongoing patients, while Jaffe mentioned how that can at times lead to a closed feedback loop.