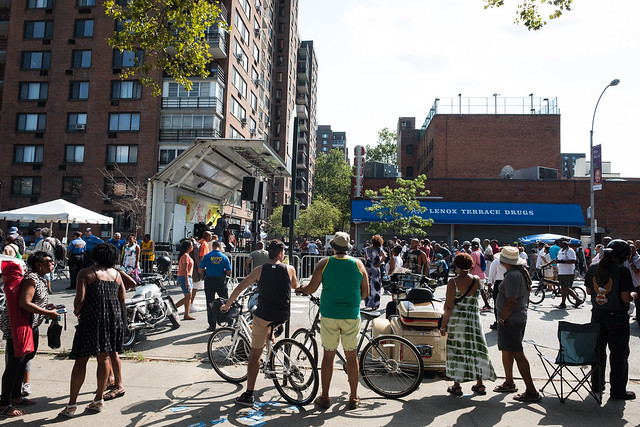 Following years-long demographic shifts of Harlem — which has been the center of pressing concerns over race, resident displacement, and loss of historical black culture — developers are eager to jump on the new opportunities for residential and commercial development while residents are wary of how their neighborhoods will change.

Elected officials, meanwhile, have emphasized different priorities for development, and, in many instances, expressed caution about growth. At a Thursday conference on “The Future of Harlem” that focused on development, Manhattan Borough President Gale Brewer said more affordable housing must be built while State Assemblymember Inez Dickens stressed that the need to protect residential areas cannot come “to the detriment of business.”

Brewer and Dickens spoke at the Alhambra Ballroom in Harlem during a half-day event hosted by Bisnow — a commercial real estate news site — that was residential, commercial, and affordable housing-focused, with panels of developers discussing their projects in Harlem, how they will benefit current and new residents, and how they plan to incorporate community culture into their plans.

Much of the conference focused on what new development means for recently-rezoned East Harlem and how community engagement will be the “rallying cry for developers in Harlem’s historic neighborhoods,” as stated on the event’s webpage. There were three panels made up of representatives mostly from real-estate firms, a few based in Harlem, and focused on repercussions from the 2017 East Harlem rezoning passed by the de Blasio administration and City Council. Dickens opened the event, while Brewer closed it out.

The new development, some of which must include affordable housing units, include 20-story mixed-use rental buildings and condos offering Central Park views.

One conference panel concentrated on new development that has resulted from the new opportunities the rezoning created, and the other two looked at the residential and commercial sides of development in Harlem. Much of the conversation centered around growth, and opportunity for growth, in East Harlem.

Steve Kliegerman, the president of Halstead Development Marketing, said until now, East Harlem had not seen the same redevelopment that has occurred in the rest of Harlem.

Community members were not included on the panels, but spoke during Q&A sessions at the end of the first panel to ask about how the developers planned to engage with the community as well as express concern that they had not yet been advised on some projects. (Tickets were $109, and Bisnow scheduled time for networking before and after speakers.)

“We’re making our first foray into East Harlem,” said Eric Brody, the chief operating officer at Wonder Works Construction, who spoke on a panel about new projects in the neighborhood. “We see it as drastically changing over the next few years.”

The 96-block East Harlem rezoning that in 2017 passed the City Council, working with the administration of Mayor Bill de Blasio, allowed higher densities and taller buildings, increased allowable residential and commercial development on certain blocks, and was intended to create economic development and affordable housing in an area that was seeing an influx of new residents and real estate speculation. The city expects the creation of about 1,200 affordable units, but some housing advocates have said the ones built so far have been more expensive than what East Harlem residents need.

“The intent of the rezoning was to increase density and increase growth while also improving affordability,” said Nicole Assa, a development associate at Blumenfeld Development Group. “There has been a lot of that, however, unfortunately the recent rent regulations reform have really thrown a wrench into this whole rezoning.”

Another developer said state government’s recent changes to rent regulations “turn the winds against” building mixed-income affordable housing buildings, but said it is complicated and potential benefits or challenges are still unclear, though he did not go into specifics.

Considerably more tenant-friendly, the strengthened rent regulations out of Albany apply to roughly 1 million existing New York City apartments and make it harder for units to be taken out of regulation and the lower than market-rate rents typically involved.

“In our city and in our office we look for more affordable housing,” Brewer said. “And in East Harlem we absolutely have to find more.”

The potential for new development in East Harlem has added to resident concerns that it will follow the same path as the gentrification in Central Harlem, where local stores around 125th Street disappear and The Gap, H&M, and Whole Foods take their place. Central Harlem’s demographics have shifted over the last 20 years from predominantly black to a more diverse and whiter population. The white population increased in the area from 2 percent of the population in 2000 to 15 percent in 2017. In the same time period, the black population decreased from 77 percent of the population to 53 percent in 2017.

Meanwhile in East Harlem, which is historically Latino, from 1990 to 2016 the white population increased by 172 percent to make up 16 percent of the population, according to a state comptroller report from 2016.

As Gotham Gazette and other outlets reported, local advocates who strongly opposed the East Harlem rezoning believed it would cause more gentrification and displacement. Marco Lala, a real estate broker from the Bronx, said at the Bisnow conference that Whole Foods opened in 2017, many thought it was the “final nail in the coffin.”

Mayor de Blasio and then-City Council Speaker Melissa Mark-Viverito, who represented East Harlem, argued that the neighborhood was seeing an initial wave of gentrification and that a city-led rezoning was necessary to help harness the forces of development to produce affordable housing and other community benefits (de Blasio's approach to neighborhood rezonings in communities of color has been criticized).

Community leaders in attendance Thursday morning expressed concern that some of the projects will not work for Harlem, in part due to a lack of outreach by developers, and will continue to transform the broader area in harmful ways. Stanley Gleaton, a member of Community Board 10 in Harlem, said in the audience during a Q&A portion of the panel the developers need to consult with Latino and African-American real-estate agencies.

“We’re here because we want to preserve our community,” Gleaton said. “[The developers] are here because you want to change. There’s a real schism here.”

A local small business owner said it has become increasingly difficult to change lease agreements and wanted to know how the developers plan to support the local boutiques and shops that have attracted people to Harlem.

Tell Metzger, a development director at L+M Development Partners, which focuses on affordable housing, said small businesses generally do not meet the criteria that developers are looking for in commercial tenants. He said the criteria “conspires” against small business owners.

“I have no idea how to bridge that gap,” Metzger said. “It’s a problem.”

Other developers and brokers at the conference said they try to be cognizant of Harlem’s history and incorporate the “Harlem brand” into their plans. Beatrice Sibblies, a managing partner of a Harlem-based real estate firm, said when she first came to Harlem she researched what the neighborhood is known for and used it as a “comparative advantage” for her business.

Kliegerman said many of their projects have worked with the community to get rid of gang and drug activity on the blocks near their developments, helping transform some from “block horrible to block beautiful.” He did not explain in detail.

He added that he believes the developers on the panel have tried to cooperate with the communities to make sure the new buildings both fit in with the neighborhood and make financial sense for the developers.

Brewer said the developers in the past who have made community engagement a top priority have had the better outcomes. She said in one case, representatives from the Janus Property Company spent a decade in West Harlem to develop their project.

“That kind of work pays off,” Brewer said. “You don’t have people screaming and yelling.”