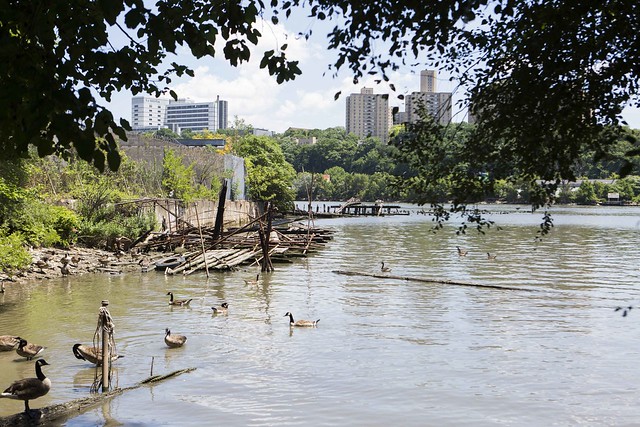 New York state government’s recent rent regulation reforms gave tenant advocates reason to celebrate, eliminating major loopholes that allowed landlords to raise rents and deregulate units among the roughly 1 million city apartments currently governed by the rent laws. One unforeseen consequence of the new Housing Stability and Tenant Protection Act, however, is how the strengthened regulations may imperil a tenant lawsuit against New York City government on the impacts of a recent neighborhood rezoning of Inwood, in northern Manhattan.

Community groups and business owners from Inwood filed suit against the city in December, alleging the de Blasio administration failed to study crucial impacts of a rezoning -- which in this and some other cases means changes to land use rules to encourage more housing density -- on their neighborhood. One of their central arguments was the city neglected to analyze how preferential rents, or rents lower than the legal maximum landlords of rent-regulated apartments are allowed to charge, put the roughly 12,000 preferential rent leased tenants in Inwood and Washington Heights at the mercy of landlords. They allege landlords would be incentivized by a rezoning to push rent-regulated tenants out and capitalize on the likelihood of a hotter rental market.

New rent reforms passed in Albany in June significantly altered how preferential rents are governed and, in turn, dashed a major argument against the city. Amy McCamphill, a lawyer representing the City of New York, sent a letter to the judge in the lawsuit earlier this month pointing out the community members’ argument is no longer relevant.

“Following the passage of this 2019 legislation, Petitioners' preferential rent claim is simply moot,” wrote McCamphill, in the letter. “Under this new law, New York State has ensured that tenants receiving preferential rent are no more vulnerable to rent increases than any other tenant living in regulated housing.”

Among other things, the new rent reforms specifically designate that tenants in rent-stabilized units paying a preferential rent, or a “sweetheart deal” lower than what a landlord can actually charge, will have the preferential rate cemented as their actual rent at the next lease renewal. What it means for tenants is landlords cannot raise the rents sky-high when it is convenient for them, like when a housing market gets hot, as the tenants are renewing their lease.

“I’m really glad the rent laws passed. It’s a happy problem to have,” said Philip Simpson, an attorney who is a plaintiff in the case, which they are proceeding with.

“Landlords are still going to do what landlords are going to do to take apartments out of rent regulation. There needs to be better analysis from the city,” said Simpson.

Additionally, the petitioners argued the city did not properly study the rezoning’s impact on minority- and women-owned businesses, congestion, and racial displacement.

In response to the lawsuit, the city said in a typical rezoning it studies potential direct residential displacement, direct business displacement, indirect residential displacement, indirect business displacement, and specific industries, according to Hilary Semel, director of the mayor’s office that plans environmental reviews, in a supportive court filing for the city’s argument. Considering all those categories and after the lengthy environmental review, the city “properly determined that the Rezoning would not lead to any significant adverse impact,” wrote Semel.

The conflict over what the city should be studying also includes the type of tenants it is including in an environmental review. The city focuses “its displacement analysis on tenants living in non-regulated apartments,” according to McCamphill. She stated that the city mainly studied tenants living in non-regulated units because it was a legally satisfactory bar for the city to meet.

Lawyers for Inwood community members believe their case will still be strong without the preferential rent argument, especially when it comes to the city failing to study the racial impact of rezoning (the city currently has no requirement for a “racial impact study” as part of environmental review, but Public Advocate Jumaane Williams has introduced legislation to mandate it) and congestion. They argue the demolition of the Inwood library and the potentiality of rising property taxes and rents will have a detrimental effect on minority groups in the neighborhood.

Plus, they say traffic will bottleneck due to new development and more people moving in, which creates negative livability and public health impacts. The lawyers allege the rezoning “promotes no plan to significantly improve infrastructure or public transportation options in Inwood to alleviate the burden imposed by more residents and more cars.” With the nearest hospital at the top of Broadway near 220th Street, the lawyers question what the bottlenecking could mean for emergency situations when EMTs need to go up the one major thoroughfare of Inwood.

State Senator Robert Jackson, who represents the neighborhoods of Inwood and Washington Heights, came in with the new class of state Democrats who helped pass the rent regulations in Albany. He said he supports the rezoning lawsuit against the city.

“The landmark rent reforms we passed in Albany this session will help mitigate the damage done by that rezoning to rent-regulated tenants, especially those with preferential rents. But fixing one symptom doesn't mean you've cured the disease. The other symptoms that predatory rezonings cause—undue pressure on family-owned small businesses, strain on already-crumbling infrastructure, health risks posed by out-of-scale construction on contaminated and flood-prone land—these are not going to go away just because we've ushered in a wave of tenant power in Albany,” Jackson said in a statement.

The Inwood rezoning, spearheaded by the de Blasio administration in conjunction with City Council Member Ydanis Rodriguez and the city’s Economic Development Corporation (EDC), was the fifth neighborhood rezoning under the de Blasio administration to move through the detailed land use review (ULURP) process. All five, and a sixth since, have been in neighborhoods with large communities of color and lower-income populations.

The rezoning plan came with $500 million in city investments, including building new waterfront parks and investing $50 million in school infrastructure. The city said it is upzoning land along the Harlem river to facilitate commercial and residential development, and projects 2,600 new units of affordable housing across the neighborhood as a result of the overall rezoning. The plan also promises to preserve and protect another 2,500 existing affordable homes.

Though there are not any official plans yet, the EDC said also it is replacing the current Inwood library with a “state-of-the-art” library that includes a pre-K facility. In addition, the agency promises to fund STEM programming in school and will build a center celebrating immigrant achievements and performing arts.

Some Inwood residents strenuously protested these changes during ULURP, despite the positive community investments, because they argue community displacement through development outweighs certain benefits to parks and schools.

The arguments by the lawyers for both the city and Inwood residents in the lawsuit will be weighed by the Manhattan Civil Court judge in the case on August 13.

“That's why I still think the lawsuit is important, because it never was just about housing alone,” said Jackson. “It's about the ecosystem of a vibrant, working-class community of color being thrown out of balance to the detriment of many for the benefit of the few.”