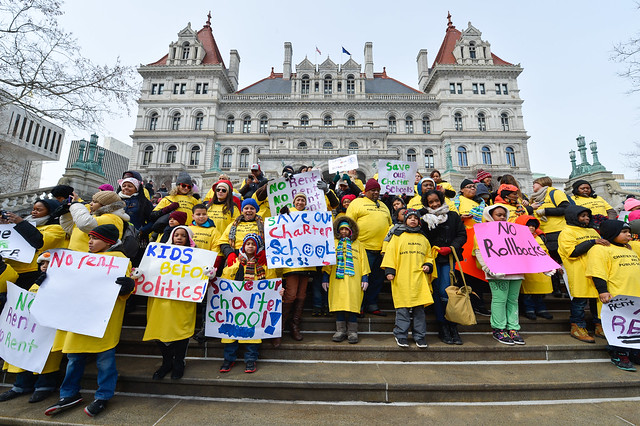 James Merriman has been involved in the charter school movement in New York since its inception 20 years ago, first as the general counsel for the Charter Schools Institute and now, for the last 12 years, as CEO of the New York City Charter School Center, a leading charter school advocacy and resource group.

“My parents were both professors. I thought I was going to be a professor. It’s all anybody did in my house,” Merriman said in a recent interview. “And the notion of being involved in education and giving all children the ability to participate fully in our civic, political, and economic life is very important to me. It was then, and it’s what still motivates me today.”

As such, Merriman has been in the middle of many policy and political fights over the years as the controversial charter school sector — public schools that are privately run — of the city’s education system has grown significantly. There were roughly 119,000 students enrolled in 235 charter schools for the 2018-2019 school year, good for 66% growth in student enrollment since 2014, while enrollment in the city’s traditional public schools has declined.

But while he has a prominent role in often-tense education debates, Merriman strikes a calm, stoic demeanor, tries to be a consensus builder, and is one of few top charter sector figures readily willing to acknowledge charters’ shortcomings.

Reflecting on the two-decade charter school movement in New York, Merriman said that originally the schools were to be “labs of innovations,” but have expanded beyond that as they succeeded, and now form a “parallel alternative” to the traditional public school system in the city. Merriman discussed the sector’s trajectory, reasons he believes New York City charter schools have been successful, and how the schools can and should improve during an appearance on the latest episode of the What’s the [Data] Point? podcast from Gotham Gazette and Citizens Budget Commission.

Merriman said at first the charter school movement was so “upstart” and “revolutionary” that at the time he did not think they would grow beyond that.

“I think, though, as time went on, as they succeeded, as parents demanded more of them, as educators wanted to start more charters, they’ve become a significant part,” Merriman said. “Obviously [WTDP’s] number of the day represents about 10% of students in New York City. We are larger than Syracuse, Buffalo, Rochester combined by a significant amount. We’re bigger than Denver in total students.”

As the future of charter schools in the city is somewhat more uncertain than in past years, Merriman weighed in on several key ongoing debates, including about student enrollment and discipline, teacher turnover, the appropriate size of the sector, why charter school students perform so well on state tests, and more.

“There are some people who would say we should not even be the size we are,” Merriman said. “And then there are people who say the natural growth is until parents stop wanting more charter schools.”

The goal of the charter school sector is not to become a replacement to the traditional public school system or even to make up half of the city’s public schools, Merriman said, but to provide parents good choices for their children.

The intent is to grow until there are no longer wait lists, he said, welcoming the idea that traditional district schools improve to the point that there is no longer such demand for charters.

“I wouldn’t say the goal is any specific number,” Merriman said. “The goal is to reach a point where we no longer have parents who aren’t getting a seat if they want one. I don’t know what that number is. I’m going to tell you, though, it’s well, well short of 50%. I just don’t see that at all in any realistic thing. Lots and lots of parents are happy with their district school they’re sending their child to.”

Applications for charter school seats have far surpassed the number of those available, with tens of thousands on wait lists. However, no more charters can be issued as New York City hit the state-imposed cap this past March and legislators declined to work with Governor Andrew Cuomo, a long-time charter school supporter, to lift the cap before the end of the legislative session in June. Charter schools are still growing, however, given that many continue to add new grades — the charter sector is predominantly elementary schools, and schools often build out over years.

Merriman said the charter school center and its allies will continue to try to convince the state Legislature to raise the cap. One of the biggest opponents of charter school growth is Mayor Bill de Blasio, who has been sharply critical of the sector, especially Success Academy CEO Eva Moskowitz, who is often the face and voice of charter schools in New York given that her network makes up 14% of charter students in the city. De Blasio has said he is opposed to raising the charter cap.

“The ethos was that we would help those students who are in need and who are at risk of academic failure and who, historically, have not been well-served,” Merriman said. “And so that’s why you see those concentrations there.”

Merriman said the test score success in charter schools comes from “what is being taught in the classroom” and that principals are more focused on academics than paperwork, often hiring a top aide to handle compliance and operations, and give robust teacher feedback, which then benefits students.

“While test scores aren’t everything, and state tests aren’t everything, they’re not nothing, either,” Merriman said. “We need to make sure that our kids have basic skills in the early grades or there is no way that we are going to be able to do complex math and English language, arts and history down the road.”

Merriman acknowledged that there are still ways the charter school system can improve. As the conversation turned to teacher turnover, which the Manhattan Institute noted in a 2018 report is higher in charter schools than traditional public schools, Merriman said teachers leave charter schools because of the difficulty of the work and how much is expected of them.

Merriman said some schools are trying to figure out how to keep a sense of urgency and focus while working with teachers (though he didn’t specify how) who may leave after 3 to 5 years due to the difficulty of the work. He said, though, that the larger networks may see the turnover rate as more of a model than an issue. Most charter schools do not have unionized teaching staff.

“As long as they think kids are doing well, if that means that most people can’t hack it in their view, well, that’s the way it’ll be,” Merriman said. “I think others think probably they’re not going to have people who work 20 or 30 years with them, that they’re trying to make sure they move from an average of say three-and-a-half years, ideally, to six or seven years.”

Some have also criticized charter schools for harsh “no excuses” discipline practices, which means harsh discipline and high suspension rates for their mostly black and Hispanic students, leading networks like KIPP to announce policy changes. Merriman said among charter schools there has already been a “reckoning” that discipline policies need to be changed, but that not all of the work has been done yet.

“People have revamped not just discipline codes, because I don’t think that’s really the issue,” Merriman said, “They’ve revamped how they think about kids. The shift, if you will, is I think in the past the notion was the children will fit the program. I think there’s a reckoning and an understanding we need to make sure the program fits the kids where they are.”