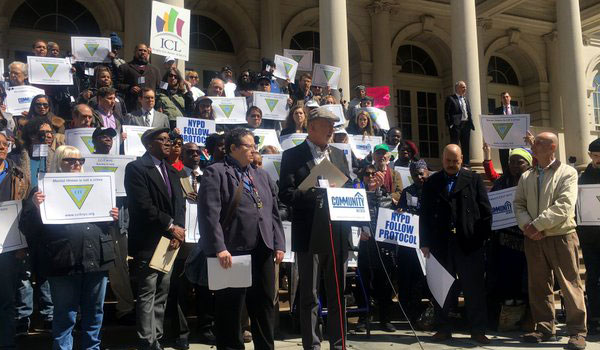 A task force empaneled by Mayor Bill de Blasio to recommend how city government, particularly the police department, can better respond to emotionally disturbed people in crisis has yet to release its report, about 10 months after its work was to be concluded.

Calls from community leaders and activists have grown, but the “NYC Crisis Prevention and Response Task Force” remains largely silent, leading advocates and elected officials to wonder why the issue isn’t a higher priority for a city that has seen 14 mentally ill people killed by police officers in “EDP” calls since Crisis Intervention Training began in 2015.

It was created on April 19, 2018 by the mayor and First Lady Chirlane McCray, who leads the administration’s mental health programming, in order to look at how New York City cares for emotionally disturbed people, who are often people diagnosed with serious mental illnesses such as bipolar disorder or schizophrenia, when they are experiencing a crisis moment like exhibiting violent or erratic behavior.

The release said it would be “a 180 day effort.” If true that would have landed its conclusion at mid-October of last year. With a couple months for internal consideration and publication of next steps, advocates, elected officials, and service-providers expected something from City Hall at the start of this year. As September approaches, there have been no signs of the task force’s final recommendations or a plan from the de Blasio administration.

“At the end of 180 days, the City will announce a citywide strategy to improve NYC’s mental health crisis system,” the press release said.

In that April 2018 press release announcing the task force, there were four stated goals: “prevent mental health crises before they happen”; “enhance coordination between the city’s safety and health systems”; “enhance ongoing support to reduce mental health crises over the long-term”; and “share data across systems to refine approach over time.”

“As a City, we have completely overhauled how we address mental health to shatter stigma and increase access to care,” de Blasio said in the release. “Now, we must do the same for when a New Yorker is at risk of experiencing a mental health crisis. I’ve charged this Task Force with developing a comprehensive strategy to prevent these situations from escalating and enhance the City’s crisis response system. These recommendations will keep our neighborhoods and our most vulnerable New Yorkers safe.”

The task force was to be chaired by top City Hall officials, with McCray as an “honorary co-chair,” and the work led by the Police Department and Department of Health and Mental Hygiene, with involvement from a variety of other city agencies and offices.

The working groups of the task force, which included around 75-80 people from a broad swath of organizations that have some involvement with people’s mental illness and/or policing, submitted recommendations to the task force’s advisory group in January. The advisory group included city leaders like NYPD Commissioner James O’Neill, now executive director of ThriveNYC Susan Herman, various deputy mayors, and others.

Crisis Intervention Training (CIT) was designed to give police officers better tools to de-escalate situations involving emotionally disturbed people. Over the past ten years, police officers have been forced to handle these situations more and more. According to a report by THE CITY, EDP calls to 911 have risen dramatically since 2009, from 97,000 to nearly 180,000 in 2018.

When someone calls 911 about a person in emotional or psychological crisis, the current NYPD response consists of sending police officers and Emergency Medical Services, but critics say this protocol falls well short in ensuring safety and care, as evidenced by the 14 deaths over the last four-plus years. Currently, the city focuses more on preventing crisis than what to do during a crisis, which is in part what this task force was created to address.

"The Task Force was very much centered on prevention, as well as ensuring that, post-crisis, people are connected to care and their life stabilizes in such a way that they are less likely to be in an emergency situation in the future," Herman, now of ThriveNYC and formerly of the NYPD, told Gotham Gazette. During the August 6 interview, Herman said the task force's report is expected within about a month but did not provide any specifics.

ThriveNYC, McCray’s mental health “roadmap” programming, utilizes two major options to prevent a mentally ill person from reaching a crisis point. First, Thrive funds about six co-response teams a day. The co-response teams are a proactive intervention for people who neighbors, bystanders, local service providers, or police believe may be demonstrating escalating tendencies towards violence. The co-response teams -- consisting of two police officers and a medical clinician -- can find that person and connect them to care and appear successful: 82% of the people co-response teams attempt to engage are successfully connected or re-connected to care or another stabilizing support such as housing or family.

Second, the city operates Health Engagement and Assessment Teams (HEAT) teams which are a health help-only response in that they don’t involve police officers. HEAT teams are called by police, or local agencies such as the Department of Homeless Services. Thrive also operates various ACT teams, which provide mobile outpatient care to those with mental illness but are not designed to respond to crises.

One recommendation by mental health advocates would make the co-response teams a 911 response. For example, when someone calls 911 regarding a mentally ill person in the midst of a crisis, 911 operators could send a clinician with a police officer to handle the situation.

"When someone is thought to be mentally ill,” said Herman, “and has already demonstrated escalating levels of violence, co-response Teams of police and clinicians can provide an important intervention. Currently, co-response teams do not respond directly to 911 calls. These teams are a proactive intervention when homeless services, police, probation, or a local clinic or social services provider has said someone is mentally ill and they worry they are getting increasingly violent. This is an intervention to avert a crisis, not to end an emergency.”

CIT training has been slow to wind its way through the NYPD. According to that same report by The CITY, as of this past March, 11,970 of the NYPD’s nearly 36,753 officers have received Crisis Intervention Training.

However, some advocates like Carla Rabinowitz, advocacy coordinator of the nonprofit Community Access, don’t think training every NYPD officer is enough: they don’t want police officers involved in EDP calls at all.

“One of our main concerns,” she told Gotham Gazette, “is that we don’t want the police responding anymore, there have just been too many incidents. We don’t feel it’s right for the police, not fair to them, it’s not fair to the families to only be able to call the police. It’s scary for families, they don’t want to call the police. They want an alternative. They want someone to come who is going to take care of their health care, not who is going to force them to the ground.”

“It’s like sending in a mechanic to do what a heart surgeon should do. You want people who know how to de-escalate, who are very familiar with mental health…you don’t want militarized force. It’s not the response.”

Another change Community Access is calling for is a non-911 number to call for people in crisis. That number could effectively take police out of the equation altogether. ThriveNYC currently operates NYC Well, a mental health tele-helpline that people with any type of mental health issue can call to talk to somebody or get connected to care. NYC Well currently has the ability to dispatch mobile crisis teams, or police with Emergency Medical Services.

No matter what the task force recommends, Rabinowitz of Community Access, which was part of the working groups, doesn’t think enough mental health “peers” were involved in the process.

“There were a lot of people on this task force, and we credit the mayor for creating this task force, the problem is…we still haven’t seen the recommendations yet,” said Rabinowitz. “And the thing we’re concerned about is on the task force there weren’t that many people with lived experience, what we call ‘peers.’ And the task force was trying to help people who were encountering the police who were mental health recipients.”

Public Advocate Jumaane Williams has been an outspoken critic of the city’s response to EDP calls. In a rally hosted by Community Access on the steps of City Hall in April of this year to mourn the one-year anniversary of both the creation of the task force that had not yet produced results and the death of Saheed Vassell, a 34-year-old mentally ill man killed by police officers, which sparked the creation of the task force, Williams said, “When it comes to issues of policing, transparency, accountability, when it comes to how emotionally disturbed persons are dealt with in this city, from the beginning to when police are called to try to fix all the problems, it is this mayor and this administration that has the accountability and the successes, and unfortunately mostly failures. He has to be held accountable.”

“When loved ones call for assistance, their loved ones need not be killed by officers who are improperly trained and do not have the tools and are not equipped to deal with medical emergencies. We are failing everyone in this system and I blame it now in totality on this administration.”