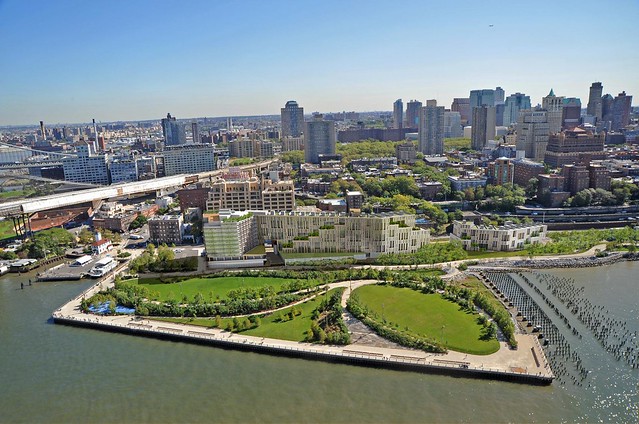 This is part one of a three-part series on '7 Years After Sandy.' Part two -- on the city’s stalled and advancing resiliency measures -- can be found here. This series is part of Gotham Gazette's work in participation with the Covering Climate Now project, which includes over 250 media outlets focusing on climate coverage in the week leading up to the 2019 United Nations Climate Summit on September 23.

When Hurricane Sandy hit in October of 2012, the city was hardly prepared for the disaster. Dozens of lives were lost, thousands of homes destroyed. It’s been well-documented and widely-acknowledged that the rebuilding process has been rife with mismanagement, and new resiliency measures have been slow to materialize as New York anticipates the next big storm.

Yet certain aspects of infrastructure in place when Sandy hit worked well -- and even helped mitigate some of the superstorm’s effects.

In the days prior to the storm surge, short-range weather forecasts saw it coming, allowing the city to make some adjustments and preparations. Schools closed, shelters opened, and the city’s residents had some limited time to prepare themselves as best possible for the incoming barrage. Those emergency preparations, occurring from roughly 48 hours before the storm hit, “went as good as can be expected considering the region was not at all prepared for a storm surge of this magnitude,” said Eric Goldstein, the New York City Environment Director at the Natural Resources Defense Council, in an interview with Gotham Gazette just ahead of the seventh anniversary of Sandy.

One complicating factor was that too many residents in vulnerable areas did not heed the city's evacuation order, seemingly jaded by warnings of severe storms that did not materialize.

But even after the storm hit, some frontline areas – those especially vulnerable to residual flooding – mitigated disaster through a variety of protocols, according to “Sandy Success Stories,” a 2013 study by the Environmental Defense Fund that includes key lessons from 2012 and for the future.

Those measures included creation of buffers designed for durability and flood endurance, targeted placement of landscaping and structures, incorporation of durable building materials and waterproof finish, and elevation of sites and equipment. Elevated mechanical and electrical equipment (above a building’s bottom floors) protected it from flood and salt damage, allowing certain important operations to resume more quickly after the storm.

For example: At 200 Water Street in lower Manhattan and the Solar One building on East 23rd Street, elevation of mechanical and electrical equipment ensured it was protected from damages. At beaches where a landscaped dune system existed, including the Beachfront Bungalow Neighborhood in the Far Rockaways, the storm was less devastating.

The study also showed that waterfront parks with plans in place to control flooding and attenuate waves were more resilient when the storm hit. At both Bronx River Park and the Brooklyn Bridge Park, both waterfront, topographic design that took into account flood-protection helped contain flooding. At Bronx River Park, a space was created that could detain water without damage, and at Brooklyn Bridge Park, multiple berms protected the park from flooding.

Additionally, adherence or adjustment to building codes often proved a recipe for safety during Sandy, according to Thaddeus Pawlowski, director of Columbia University’s Center for Resilient Cities and Landscapes, in an interview with Gotham Gazette.

“With two houses right next to each other, the house where you step in right off the street would have gotten knocked off its foundation, and the house next door that’s elevated would have been totally fine,” Pawloski said.

Since Sandy, these building codes have been strengthened with an eye toward future storms and floods, with new waterfront buildings held to higher standards amid a changing climate and its realized and expected impacts. The capability of waterfront infrastructure to withstand flooding will be important regardless of massive storms like Sandy, Goldstein said. With sea levels rising due to climate change, shoreline areas are at risk of flooding following routine rain storms and high tide, he said.

While those waterfront areas that escaped flooding during Sandy were for the most part designed to do so, it was not really with disaster preparation at the forefront, according to Sandy Success Stories. Rather, efforts toward sustainability proved to serve a dual purpose, functioning as emblems of resiliency.

“Many of these actions grew out of the pursuit of social, economic and environmental sustainability – rather than from fear of storm surge – suggesting a strong tie between the current sustainability agenda and physical resiliency,” the study reads.

While many resiliency projects are neighborhood specific, the study showed citywide wetland restoration to have the potential to mitigate flooding. In parks and beaches along the coastline, plants that have a high tolerance for flooding and salt inundation can serve to absorb flood water at a significantly higher pace than freshwater plants, thus serving as an additional mitigating factor to decrease flooding. On beaches especially, dunes proved to be effective flood barriers. While the city has embraced dune construction as a mode of its resiliency projects, it has not shown as much interest in wetland restoration, a major flaw in its post-Sandy response.

Though many of the city’s resiliency projects are neighborhood or borough specific, some citywide initiatives -- like dune construction -- can be undertaken to improve resiliency, while others have been aimed at fixing the devastation Sandy left behind. [Part two of this series will look at the city's limited resiliency efforts since Sandy hit seven years ago.]

Build It Back
In the aftermath of Sandy, the city sought to help rebuild homes of residents that were destroyed in the storm; thus began the Build It Back program, designed under Mayor Michael Bloomberg to reconstruct or fix damaged homes or reimburse residents for their worth, primarily through federal funding. However, it wasn’t until nearly two years after Sandy hit that the program began to reimburse for destroyed homes, and an additional year until homes began to be rebuilt.

“While we still have a lot of work to do, we are seeing real progress under Build It Back, and more families hurt by Sandy are moving home every week,” Mayor Bill de Blasio said in a 2017 press release, though he has regularly acknowledged that the program has had significant flaws, and has said that the city would do things totally differently if presented with a similar situation in the future. De Blasio inherited the program from the Bloomberg administration when he took office in January 2014, a little more than a year after Sandy hit. Neither administration managed it well.

According to the city, the Build It Back program has now served 100 percent of applicants, and 99 percent of homes in general, with construction, reimbursement checks, property acquisition or completed construction, according to a spokesperson for the Mayor’s Office of Resiliency. But while the city claims to have served 100 percent of applicants, many residents who would have qualified for the program left the area to avoid long wait times to rebuild their homes, Goldstein said. Others simply didn’t stick with the program.

One year after the storm hit, 20,275 households had registered for Build it Back, according to a joint study by the city and the Center for Urban Research at the City of New York Graduate Center. Of those registered, 26 percent hadn’t submitted an application for Build It Back, and an additional 26 percent completed an application but did not pick a program option, effectively withdrawing them from Build It Back. Four years after the storm hit, only 8,040 applicants - less than 40 percent of those initially registered - remained in the Build it Back program.

“7 years later the fog of war clears a little,” Goldstein said. “But for many if not most of the residents they encountered interminable delays and bureaucracy. People who all of a sudden had no place to live and possessions waterlogged were faced with a lot of uncertainty that lasted months or even years.”

The Build It Back program also faced criticism from those who questioned whether homes destroyed by flooding should be rebuilt if they were to remain deep in flood zones, Goldstein said.

“You have to ask what is the strategy for long-term planning for houses that are located in areas subject to repeated flooding?” Goldstein said. “Dealing with the short-term need of property owners to get back into their homes to some extent sidestepped these longer-term questions of where it makes sense for New Yorkers to live in an era of rising seas and climate change.”

Though the city has developed some plans to curtail the effects of climate change on its many miles of coastlines -- including to extend lower Manhattan into the East River and to construct a 5.3 mile levee on Staten Island, from Fort Wadsworth to the East Shore -- there is no comprehensive citywide plan for dealing with the long-term impacts of climate change on the most vulnerable communities along the city’s coasts, Goldstein said.

“This is a long-term existential threat to the city and the nation and the planet. And unfortunately, in politics, oftentimes short-term issues take precedence over long-term matters even when those long-term matters are greatly important to the very future of the city,” Goldstein said.

This is part one of a three-part series on 7 Years After Sandy. Read part two -- on the city’s stalled and advancing resiliency measures -- here.

This series is part of Gotham Gazette's work in participation with the Covering Climate Now project, which includes over 250 media outlets focusing on climate coverage in the week leading up to the 2019 United Nations Climate Summit on September 23.