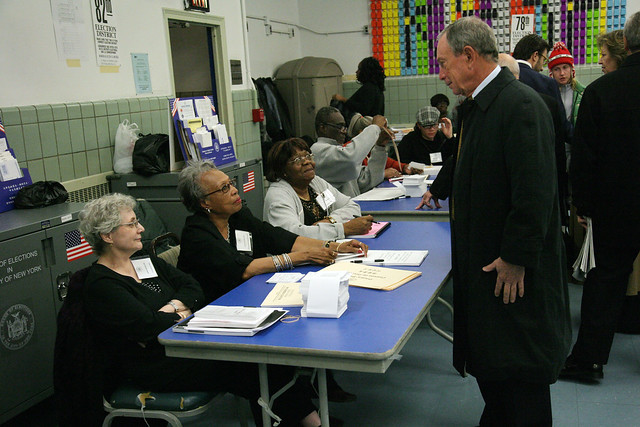 While city officials and elections administrators clash over what changes the Board of Elections should make to improve operations and the voting experience, one widely-supported option the city could pursue sits on the back-burner.

A municipal poll workers program would allow the Board of Elections to hire Election Day poll workers from a pool of city employees, significantly reducing the hiring and training burdens for administrators and helping to ensure poll sites are more effectively staffed.

The proposal is an unusual point of agreement among the city Board of Elections, the City Council, Mayor Bill de Blasio, and good government advocates, who have all indicated varying levels of support for it, and it is one voting policy the city can enact without action in Albany. It would still require compromises, not only between the de Blasio administration and the BOE, but with the city’s politically active municipal labor unions as well.

The mayor and City Council Speaker Corey Johnson, who have been highly critical of the BOE’s performance, have both said that poll worker hiring and training is among the top priorities they would like to see the board take up. Michael Ryan, the board’s executive director, has repeatedly highlighted a municipal poll workers program as a powerful tool the BOE would like to have at its disposal to better run elections.

“I would like to take this opportunity to renew the Board’s request to enter into a partnership with New York City to develop a robust municipal-workers-as-poll-workers program,” Ryan told Johnson and other Council members at an oversight hearing following the general election last November. Johnson said he was “open to that” but emphasized alternatives he would like to see the board pursue to address training and staffing shortages.

Election Day is perennially plagued by mishaps like jammed ballot scanners and long lines of voters, created or compounded by overworked poll site staff who are not necessarily experienced in liaising with constituents or quickly moving voters through the process, or equipped to handle some of the more technical problems that can arise. Currently, the BOE struggles to recruit the roughly 36,000 temporary poll workers needed to staff a general election day. In part to help fill those positions, the board requires applicants to have few professional qualifications beyond a mandatory four-hour training.

The board currently finds candidates through referrals from local political party organizations, subway ads, a CUNY initiative to recruit students who typically have the day off, and other such avenues. Despite these sources, turnover is high.

Since 2016, the mayor and City Council have offered the BOE $20 million to improve its operations, including $10 million to expand poll worker training, recruitment strategies, and salaries, which the board has repeatedly turned down. Faced with resistance from Ryan, de Blasio has expressed some interest in working with the BOE on a municipal poll workers program, but is also frustrated with the lack of cooperation on his preferred approach.

When asked about the program at a press conference in April, the mayor told reporters, “Look, we’re happy to work with them on any approach that will improve things, but that’s exactly why we offered them the $20 million.”

Jose Bayona, a mayoral spokesperson, affirmed that sentiment in a statement to Gotham Gazette. “We’re committed to having fully staffed polling locations, which is why we’ve offered the BOE $20 million for necessary reforms, including increased staffing. In the meantime, we are exploring whether there is a path forward for a municipal poll workers program in New York City,” he wrote in an email.

Johnson took a tone similar to de Blasio’s when Ryan raised the issue at the November oversight hearing -- frustrated by the BOE’s rejection of city funding, but willing to discuss alternatives. More recently a spokesperson for the Speaker expressed explicit support for a municipal poll workers program to Gotham Gazette, but is not aware of any specific proposals being discussed by the administration. The spokesperson added that it is clear to Johnson that the city needs a robust plan to ensure proper election administration, including staffing at poll sites.

Ryan was hired by the board’s commissioners who are chosen by county party officials and enjoys a high degree of insulation from the mayor’s or Council’s influence. Because they are limited in their ability to compel the board, which is an entity of state law, to take action, de Blasio and Johnson have sought to use the city budget to incentivize reforms. But they have clashed with Ryan over how to spend the money and the best approach to staffing poll sites.

Hovering in the background of this dispute is the possibility of finding common ground on a municipal poll workers program. That would require coordination among city agencies and negotiations with municipal unions, which have never been pursued under de Blasio, according to Bayona.

Under the supervision of poll site coordinators, poll workers are responsible for looking up names and addresses in the voter rolls, distributing ballots, and directing voters to ballot reading machines. They work long hours -- over 16 hours, from 5 a.m. to after 9 p.m. -- and are paid $250 for the day, plus $100 to attend the required four-hour training, according to a BOE spokesperson.

The long hours and low pay make it difficult for the board to recruit and retain poll workers in the leadup to an election. According to a New York Times report, 70 percent of potential poll workers recruited by the board drop out before Election Day. A municipal poll workers program would allow the BOE to supplement its hiring with vetted city employees who have experience providing government services.

"They’re dealing with the challenges of hiring 35,000 poll workers, which is essentially a temporary job that is a couple of days per year. So you’re not going to get the best and the brightest,” said Alex Camarda, senior policy analyst for the good government group Reinvent Albany. “If you tap the city’s employees...you’re going to get a much more qualified workforce that at least in theory is used to dealing with people, because they do so at their agencies every day.”

“A lot of the problems would be solved by having city employees work as poll workers, or at least some poll workers,” he added.

Because it is illegal for municipal employees to be paid twice for one day of work -- like being paid by the BOE at the same time that they are on the clock at their primary city job -- the path forward would require a change in the law or a provision in municipal employee contracts.

“So then the question is how to handle it. Is it appropriate to give an additional vacation or personal comp time day in order to balance that out,” said Susan Lerner, executive director of the government watchdog Common Cause New York, in an interview.

“That’s a collective bargaining question, which so far it is my understanding the city has not taken up with the unions,” she added.

There are roughly 332,000 full-time city employees, according to Citizens Budget Commission, most of which are represented by unions, such as District Council 37, United Federation of Teachers, and the Uniformed Sanitationmen’s Association.

The BOE has also been reticent to allow part-time poll workers to handle problems with ballot scanners -- which are prone to jamming and a major contributor to poll site chaos -- because of the technical expertise required to deal with the machines. Ryan says having an additional team of municipal employees dedicated specifically to clearing simple jams would go far. He has sought a model similar to Los Angeles County’s.

“One of the direct fixes that we can do is have steady staff at the poll sites who are there simply to clear what I am going to refer to as the ‘top-side’ ballot jams,” he told Johnson at the November hearing. “So if a ballot does jam it can be cleared quickly, as opposed to relying on a team of field technicians to have to be dispatched from one location to another.”

If the mayoral administration was interested in pursuing a municipal poll workers program through municipal employee contract negotiations, nothing in the law would prevent it from doing so.

“As a general matter, at present public servants are permitted to work as election day poll workers and translators; they do not require waivers of Chapter 68, the City’s conflicts of interest law, to do so,” wrote Chad Gholizadeh, assistant counsel at the Conflicts of Interest Board. COIB does not have any specific guidance related to poll workers in the rules it has promulgated.

One obstacle the city may face in creating a municipal employee poll worker program is the level of political activity by labor unions in New York. Unions often back candidates and encourage their members to participate in get-out-the-vote campaigns in the leadup to and on Election Day. Having city employees working for the BOE at the polls means they would not be available to do the type of electioneering their unions may endorse.

"We’d have any conversation with [the BOE] but again I find it a little contradictory that we had an approach that would start to address that issue while still allowing city workers to do the work that they are doing – there wasn’t even interest in engaging that seriously," de Blasio said at the April press conference.

Council Member Ben Kallos, who has sponsored legislation on BOE hiring practices, does not believe union political activity has been a consideration for DC37, the city’s largest municipal employee union. “They and their members are just so about the public service and I have never heard a concern that they would prefer to have their members out in the field. For them it’s just about what else can we do to help our city,” he told Gotham Gazette.

Kallos says for DC37 “the only question they had was a logistics question,” like whether the compensation is appropriate and how it would affect time off.

DC37 did not respond to multiple requests for comment for this story. Three other unions representing city employees contacted by Gotham Gazette would not weigh in on a municipal poll workers program.

“We have not seen any details and have taken no position,” wrote Dick Riley, a spokesperson for the United Federation of Teachers, in an email, and the Uniformed Sanitationmen’s Association declined to comment.

Gregory Floyd, president of Teamsters Local 237, which represents employees of NYCHA, CUNY, and some city agencies, told Gotham Gazette the union would not take a position on a municipal poll workers program without seeing specific proposal details.

He did, however, offer the city some advice: “They need to find qualified people wherever they can.”