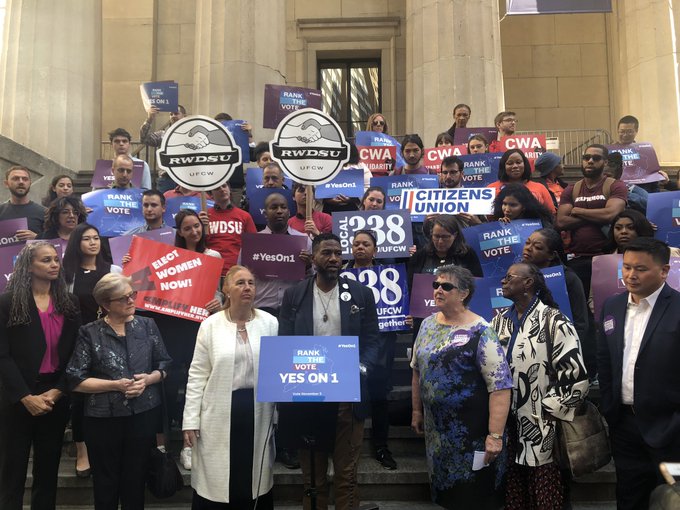 A coalition of elected officials, business and labor leaders, and reform groups gathered Thursday in Lower Manhattan to launch a campaign to convince New York City voters to change the way they elect their representatives in city government.

Voters in New York City this fall will have the opportunity to approve ballot referenda on a number of reforms to the City Charter, including a new election system known as “ranked-choice voting.” The new system would allow voters in primary and special elections -- but not general elections -- to rank up to five candidates on the ballot rather than choosing just one, which advocates say will force candidates to reach a larger base, eliminate so-called “spoiler” candidates, ensure winners have a broad mandate, and save the city millions in costly runoff elections.

The coalition, Rank the Vote, which formed to promote the new voting method, held a press conference on the steps of Federal Hall Thursday morning, just over six weeks from this year’s Election Day, which is Tuesday, November 5. Speakers discussed the possibility of overhauling city elections and what they believe is the importance of voting yes on the ranked-choice voting ballot referendum, which will be the first of the five charter revision questions on the ballot.

“Ranked-choice voting is a system that will help voters choose the candidate who has the broadest base of support, because all too frequently what we find is that the winner in these crowded fields is chosen with much less than a 50 percent majority,” said Susan Lerner of Common Cause New York, as she kicked off the press conference. “It’s not as healthy for our democracy as it needs to be.”

Ranked-choice voting is in effect in a few cities like San Francisco, Minneapolis, and Santa Fe, and Maine is projected to use the method in the upcoming presidential elections. Under a ranked-choice voting system, voters choose candidates in order of preference. If no candidate wins a majority of votes on the first count, the candidate with the least support is eliminated and ballots for them are redistributed to their voters’ second choices. That process is continued until a candidate crosses the threshold need to win the seat.

The proposal before New Yorkers this year allows voters to rank up to five candidates in primary and special elections, and requires the winner to receive more than 50 percent of votes. Democratic primaries in New York City can be especially crowded, with citywide elections prone to possible run-offs between the top two candidates if neither reaches 40 percent initially, and down-ballot races won by candidates with relatively small pluralities.

The referendum is one of 19 placed on the ballot in five yes or no questions by the city’s 2019 Charter Revision Commission. The body -- with representatives appointed by the mayor, City Council, public advocate, city comptroller, and five borough presidents -- was responsible for examining the entire City Charter and putting amendments on the ballot to be voted on by the electorate.

Speaking Thursday morning were players from across the city’s political spectrum, including Public Advocate Jumaane Williams, a Democrat, and Kathy Wylde, president of the Partnership for New York City, which represents the city’s business community. Also speaking were Manhattan Borough President Gale Brewer, Bertha Lewis of the Black Institute, and Maya Wiley, Senior Vice President for Social Justice at the New School.

Assembly Member Ron Kim and Council Member Brad Lander made remarks, as did representatives from New Kings Democrats, Amplify Her, and New York Communities for Change. Labor unions like RWDSU and CWA, and good government groups like Citizens Union and Lerner’s Common Cause NY are also members of the coalition.

Ranked-choice voting, also known as “instant-runoff voting,” would replace the current voting system in city primary and special elections, which for citywide elections requires candidates to win 40 percent of the vote; if no candidate reaches the 40 percent threshold a runoff election is triggered -- a separate election in which only the highest two vote-earning candidates face off again.

“As someone who ran for Citywide office and participated in a runoff election, I know from personal experience that Ranked Choice Voting is necessary for New York,” said Betsy Gotbaum, the former public advocate and currently executive director of Citizens Union, in a statement. “Ranked Choice Voting will foster more positive, issue-focused campaigns, give voters more choice, ensure that elected officials are accountable to a broader spectrum of their constituents and avoid costly, time consuming and unnecessary runoff elections.”

The advocates say ranked-choice voting strengthens the concept of majority rule by ensuring the winner is receives more than 50 percent of the vote and requiring candidates to seek support beyond their base.

Brewer said it is important in a city as diverse as New York for voters to be able to express a range of choices in multifaceted campaigns. “If you’re running city-wide, you don’t just go to ten districts...you got to go to all the districts, you have to talk to everyone, you got to have a conversation,” she said.

“I am tired of people winning with 28 percent of the vote,” said Lewis, likely referencing borough president and City Council races, where there are no runoffs and candidates often win all-important Democratic primaries with low percentages in crowded races.

Supporters also say ranked-choice voting encourages turnout and can help "minority candidates" win. Alice Nascimento spoke for New York Communities for Change, which organizes low- and moderate-income families for political action. “When we talk to them about voting a number of times they say my vote doesn’t matter, there are too many candidates,” she said, referring to the constituents she works with.

The city Campaign Finance Board anticipates an astounding 500 candidates to be running for city office in 2021, when most City Council seats, four of five borough president positions, and two of three citywide positions, including mayor, will be wide open due to term limits. Because many of those races are likely to have several candidates, it’s likely that no candidate will receive more than 40 percent of vote in many races.

“Nobody’s going to know all of those candidates, and we really have to put the burden on candidates to get out beyond their core, base group and get to know what the issues are for the broader constituency,” said Wylde of the Partnership for New York City.

“And business issues aren’t frankly being very well represented these days, and we think this is a shot at getting them better represented in the public dialogue,” she added.

New York has one of the lowest voter turnout rates in the country and that is likely to be worse in the “off-year” elections of 2019, when only two major races are taking place (a public advocate special election and the Queens district attorney election). This means few New Yorkers are likely to turn out to decide the charter revision proposals.

Asked whether fundamental voting methods should be decided by a small fraction of eligible voters, Council Member Lander acknowledged the scenario was not ideal, but that passing ranked-choice voting by referendum in 2019 is the best option the city has.

“I’m confident this would win in a high turnout election. Charter revision commissions are timed when they are timed, so we have to move forward now,” Lander told Gotham Gazette after the press conference.

“And the charter revision process was very inclusive of a lot of people. Lots of communities, I think, were consulted in it and really had an active voice,” added Cynthia Richie Terrell, executive director of Represent Women.

Questions remain about how the public will be informed about the changes to city elections, should ranked-choice voting be approved this fall. “There’s going to be a learning curve...It’s very difficult. We have to find more creative ways, obviously, to get the information out. Those creative ways also cost money,” Public Advocate Williams told Gotham Gazette.

The city Board of Elections has been criticized for the low level of voter education and public engagement it has undertaken in the past. “Hopefully when people get to Election Day they’ll be given better instructions than they’ve been given in the past about what’s going on. But I think we’ll learn together and with any new system, the more we use it the more people are going to get used to it,” Williams said.

Lerner, speaking on behalf of Rank the Vote, which has a 501(c)4 registered with the Board of Elections for political activity, told Gotham Gazette, “There is confidence in a broad coalition of New Yorkers -- civic organizations, labor unions, engaged citizens -- who are going to take the message out.”

“If the voters adopt this we will absolutely be working with the city, with the board, but we are not going to rely just on the Board of Elections,” she added.

Ranked-choice voting will be part of the first question on the ballot this fall. Voters will be able to weigh-in during the nine-day early voting period from October 26 to November 3, or on Election Day, November 5.