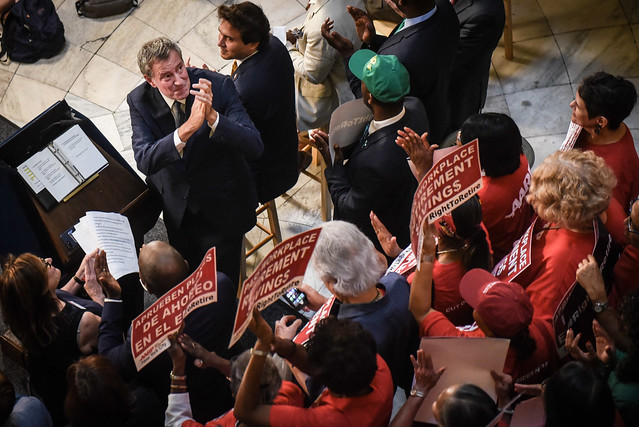 Just days after he ended his presidential campaign that was focused on issues affecting working people, Mayor Bill de Blasio rallied with AARP volunteers and City Council Members at City Hall on Monday to push for a proposal that could help millions of New York workers save for their futures.

The Retirement Security for All proposal, which de Blasio first raised three years ago and then again in his State of the City speech this year, would establish a retirement savings program for private-sector employees whose employers do not currently provide those options, and a city government board to oversee its implementation.

There are two bills in the legislative package that would create the system and the board and sponsored by Council Members I. Daneek Miller and Ben Kallos, who led a hearing on the proposal shortly after the Monday morning rally.

At the hearing of the Council’s Committee on Civil Service and Labor, chaired by Miller, there was broad support for the legislation as well as opposition from some who raised concerns about the administrative burdens the program could place on employers and small businesses.

Kallos’ bill would mandate that businesses with ten or more employees automatically enroll their workers in individual retirement accounts, while giving them the option to opt out. The retirement plans would be funded only through employee payroll deductions, at a default rate of 3% of income, though employees would be allowed to choose a higher or lower rate.

Miller’s bill creates a board of mayoral appointees to oversee the implementation of the program, which would likely hire an outside firm to manage the retirement plans and charge low fees to make the programs affordable and attractive to employees.

The bills are a solution to a stark problem. Testifying on behalf of the de Blasio administration was John Adler, the director of the Mayor’s Office of Pensions and Investments, who reiterated the data point that 40% of New Yorkers aged 50-64 have less than $10,000 saved for when they retire. Out of the roughly 3.5 million private sector employees in the city, only about 41% have access to an employer-sponsored retirement plan, down from 49% ten years ago, Adler said, citing a report from The New School’s Schwartz Center for Economic Policy Analysis.

“This program has the potential to significantly reduce future poverty among retirees in New York City,” Adler said in his opening remarks at the Council hearing, “and take an important step towards helping over a million New Yorkers maintain or improve their standard of living when they stop working.”

The proposal is also similar to programs that have already launched in California, Illinois, and Oregon, and following their lead would allow New York City to avoid any hiccups in implementation, he said. De Blasio estimated earlier that the city’s management of the programs would cost between $1.5 to $3 million each year for the first three years, and that the program would eventually be self-funded through fees on the investments made by the retirement plans.

Though New York State passed a measure last year to allow employers to create voluntary retirement savings plan, there has been little movement on that front. Adler said that program, which is an opt-in rather than an opt-out plan, would likely fail to expand access like the city’s proposal.

“We don’t think that we should be waiting for the whims of Albany to possibly change or strengthen their plan,” he said. “We have a crisis now in New York City...and frankly every month that we wait is an opportunity that’s lost for workers to begin saving for their own retirement.”

Adler also recommended that Kallos’ bill be amended to establish a 5% default contribution rate, insisting that it does not discourage participation as is evident from other jurisdictions with similar programs.

The mayor’s push for the retirement security proposal in 2016 died soon after because of the Republican-led Congress, which struck down an Obama-era rule by the Department of Labor that explicitly allowed municipalities to create private sector retirement programs. But that Republican measure did not change the underlying federal retirement law, which Adler said still allows the city to move forward. That’s why other states have been able to legally create their own retirement savings programs, he said.

The two bills have limited support so far from other Council members, at least as far as co-sponsorship goes. Kallos’ bill has five other sponsors besides him and Miller, while Miller’s bill has four other co-sponsors. But Kallos seems confident that the bills will advance quickly, particularly with the mayor’s backing. At Monday’s hearing, Council Member Andy King also said he would sign on to the legislative package. The bills have no timeline for passage but the mayor’s office, in a release sent out Monday afternoon, estimated that the program would be launched by the end of 2021, when de Blasio and most of the City Council will be leaving their current posts due to term limits.

Experts and researchers who testified at Monday’s hearing recommended several measures to ensure that the city’s program is a success. Caroline Crawford, assistant director of state and local research at the Center for Retirement Research at Boston College, said “three criteria are essential to success” of the program – a mandate to ensure employer participation, minimizing opt-out behavior and an adequate default contribution rate.

Representatives of the Communication Workers of America and AFL-CIO also supported the bills at Monday’s hearing.

A crucial mover behind the proposal has been the AARP, which first rallied with the mayor for Retirement Security for All in 2016. Beth Finkel, state director of AARP New York, noted that employees were 15 times more likely to start saving money if offered a retirement program by their employer. Finkel also urged the Council members to strengthen the proposal, by expanding the mandate to employers with five or more employees and to establish a 5% default  contribution rate.

“New York City is the greatest city in the world but it is also an expensive city and we know Social Security alone is not enough to retire on alone,” she said.

There was some pushback against the bills. Aliya Robinson, senior vice president of Retirement & Compensation Policy at the ERISA Industry Committee, brought up concerns about how the legislation may affect existing retirement programs. Robinson urged changes to Kallos’ bill, including completely excluding all employers that provide a retirement plan under the Employee Retirement Income Security Act of 1974, setting restrictions on eligibility based on age and number of hours worked as established by the ERISA law, and exemptions without reporting requirements for employers similar to programs in Oregon and Illinois.

Alison Wielobob, general counsel of the American Retirement Association, similarly echoed Robinson’s testimony. She said the bills would “would place undue complexity and burdens on employers by imposing a set of rules that parallel the extensive and effective set of federal rules that already apply to workplace retirement plans.”

Andrew Rigie, executive director of the New York City Hospitality Alliance, also warned that the bill could violate the ERISA law, despite other jurisdictions having faced no legal challenges yet, and cited anecdotal comments from the restaurant industry to insist that tipped workers with small paychecks will be hesitant to participate. He also raised the spectre of complications for businesses that employ undocumented workers.

But there was ample testimony that indicated those concerns were largely unfounded or insufficient to not act.

Rick McGahey, senior fellow at The New School’s Schwartz Center for Economic Policy Analysis, said a failure to act could mean that by 2026, about 825,000 middle class workers in the state could face poverty at retirement – half of those workers live in the city.

Michele Evermore, senior researcher and policy analyst at the National Employment Law Project, spoke of the racial wealth gap that persists into retirement, and the need to address it through any means necessary, including a retirement security program.

And Angela Antonelli, research professor and executive director of the Center for Retirement Initiatives at the McCourt School of Public Policy at Georgetown University, laid out multiple benefits of New York City creating an automatic enrollment retirement savings program – it would help millions of workers save money and be more mobile, make small businesses more competitive, help gig economy workers, benefit underserved populations, reduce burdens on state and federal budgets, and create a model for other states, among other positive impacts.

Michael Parker, executive director at the Oregon Savings Network, which was the first-of-its-kind plan when it launched two years ago, touted the success of the state’s program in testimony via video conference. He said about 50,000 new retirement accounts had been established, worth about $30 million saved, with the rollout continuing. The program’s participation rate is holding steady at about 72%, he said, meeting projections. “By not having compliance at the beginning, we sort of set up a culture of noncompliance instead of the other way around,” he said.