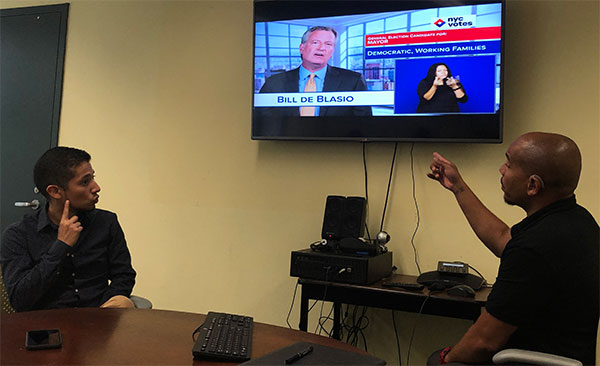 New York City is home to more than 200,000 residents who are deaf and hard of hearing, and they almost never vote. It’s not for a lack of will, but rather because of inadequate access to information on voter registration and candidates, according to city officials. To address that gap, the city is launching its first-ever voter guide in American Sign Language, a long overdue measure to ensure that deaf and hard-of-hearing voters are able to participate in the city’s democratic process.

The New York City Campaign Finance Board, which releases voter guides for each election with information on the candidates and questions on the ballot, created the guide in collaboration with The Mayor’s Office for People with Disabilities (MOPD), the city’s DemocracyNYC office, and advocates from the deaf community. It will be released on Thursday.

“We were trying to figure out a way to provide this information to the deaf and hard-of-hearing community in their native language,” said MOPD’s Tony Wooden Jr., at a Wednesday presentation provided to Gotham Gazette at the agency’s office in downtown Manhattan. Wooden Jr. is project supervisor of ASL Direct, a video-calling assistance line that MOPD runs for deaf and hard-of-hearing New Yorkers.

The ASL voter guide complements the Campaign Finance Board’s current work by including an ASL interpreter in videos where candidates running for local office introduce themselves to voters. Keeping in mind the diversity in the deaf and hard-of-hearing population, the video guide does not include captions and employs a deaf interpreter who can reach a broader audience. “A lot of times, when you’re watching something on TV, you can usually turn on closed captions and read the words. But in the deaf community, you have to keep in mind that English is not the first language, American Sign Language is,” said Wooden Jr.

Dennis Martinez, a deaf services advocate at Harlem Independent Living Center, worked with the city on the voter guide project. “This is the first time we've ever had access to candidate information for the deaf community,” Martinez, who is deaf, said through an interpreter. “And up until this point, there's been no efforts made by other spaces as well, that I know of. So this has been wonderful in terms of advocating for deaf rights in our city as well as getting information out to people who are voters.”

“The way she's signing as a deaf interpreter is appropriate for deaf people of all different backgrounds and levels of skill and language skill level,” Martinez said watching the voter guide interpreter. “Because she's expanding the concepts more than just interpreting the words.”

The guide is the latest effort by Mayor Bill de Blasio’s administration to expand access to voting and voter turnout through the recently-launched DemocracyNYC initiative. One of its goals has been to provide more poll-site services to people with disabilities. Nisha Agarwal, senior advisor to the Office of the Deputy Mayor for Strategic Policy Initiatives, which runs the initiative, said they are working on helping people with disabilities reach the polls and on providing ballot marker devices. They’ll push the new guide out through advocacy groups and all community events being hosted by the CFB, MOPD, and DemocracyNYC. “We will put it in anything that makes sense,” Agarwal said.

Officials stressed this year’s guide is a pilot. “We want to work on improving this,” said Agarwal, who was at Wednesday’s presentation along with Matt Sollars, CFB’s director of public relations.

On that front, Agarwal said this year’s passage of early voting by the state Legislature was welcome news. Sollars said it would help reduce lines at polling site on Election Day, particularly during next year’s presidential election, and will particularly help facilitate voting by the deaf community. “Now you have a lot more time to get to the polls when it's convenient for you, which I would imagine is really important to this community,” Sollars said. “It's going to be a game changer on access for everybody, but particularly for the deaf and hard-of-hearing community.”

With the launch of the ASL voter guide on Thursday, the city is also hoping to drive deaf voters to register before the October 11 deadline for the general election, for which early voting will begin on October 26. Election Day this year is Tuesday, November 5. Martinez said HILC is looking to set up a voting workshop, to encourage registration as well as instruct deaf voters on absentee voting (the deadline for postmarking absentee ballots for the general election is October 29).

In the next citywide election, in 2021, the CFB will have its work cut out for it and Sollars said the pilot ASL guide will teach them valuable lessons. “We have 500 candidates that we’re expecting to register with us for the 2021 elections,” he said. “So it will be a big task to produce the interpretations...This was great, we learned a lot, and we're going to be able to take those lessons into production in 2021.”