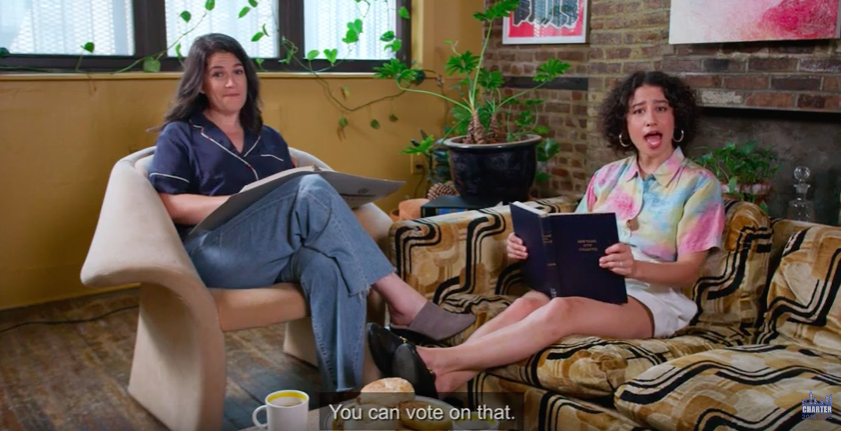 When trying to gin up public attention on seemingly mundane government minutiae, a bit of star power never hurts.

Most New Yorkers probably don’t know that they can vote this fall -- starting with the launch of early voting on October 26 -- on fairly significant changes to city elections and governance, so the team behind the ballot proposals is enlisting two people known for New York City pride.

As early voting and November fifth’s Election Day approach, the 2019 Charter Revision Commission is ramping up efforts to inform voters about the series of ballot questions and encourage them to head to the polls, and they’ve recruited “Broad City” television and comedy stars Ilana Glazer and Abbi Jacobson to help get the message out.

In the next phase of the commission’s public education campaign, a new public service announcement will launch Tuesday that features Glazer and Jacobson talking up the City Charter and opportunities to vote on changes to it.

The Charter Revision Commission, tasked with proposing changes to the city’s seminal governing document, has placed five questions on the ballot, with a total of 19 proposals contained within that would change how elections are conducted, enhance the powers of a police oversight agency, strengthen ethics laws, provide dedicated budgets to the public advocate and borough presidents, and make tweaks to the city’s budgeting and land use processes.

To ensure a robust response to the ballot questions, in what is expected to be a very low-turnout election, the commission launched its campaign aimed at reaching voters through ads on buses and subways, television, radio, print, and digital. The commission is spending between $1-1.4 million on the entire campaign. The spot featuring Glazer and Jacobson seeks to add a bit of buzz to the more traditional ads that have been published thus far. The PSA, for which Glazer and Jacobson volunteered their time, cost $16,000 to produce and will run on TV and digital media through Election Day.

The comedic duo is seen sitting together in a living room, reading the City Charter and imagining, in their typically absurd brand, voting on benefits to give New Yorkers, like a government-issued personal force field for anyone who steps foot in Times Square.

But then they turn to the charter.

“Did you know on November 5th, we can vote on other cool stuff? Like, we get to amend our city’s charter,” Glazer says.

They list two of the more significant proposals – ranked choice voting, which would radically change election administration, and improving police accountability, through strengthening the authority of the Civilian Complaint Review Board.

“You can vote on that!” the two comedians say, echoing the signature line of the charter commission’s awareness campaign.

“This election is happening during an off-year so we want to do everything possible to make sure that New Yorkers know that these proposals are on the ballot,” Charter Commission Chair Gail Benjamin said in a statement about the ad, which Gotham Gazette previewed. “That’s why we were so excited to have Abbi and Ilana join us in this campaign. We know that when they talk, people listen.”

Benjamin and the Broad City stars are hoping that New Yorkers say ‘Yas Queen!’ to voting, if not all five ballot questions.