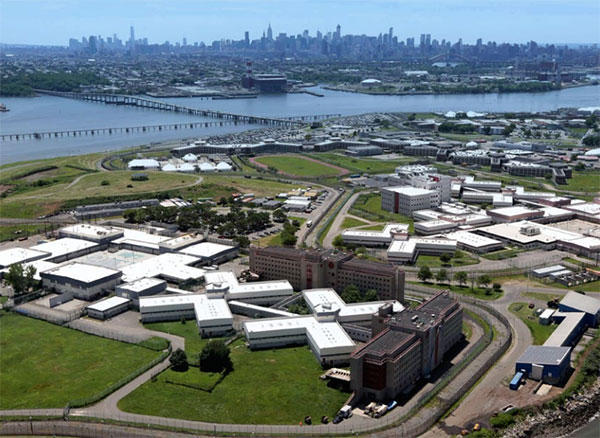 Late last week, the New York City Council approved the de Blasio administration’s plan to build four new borough-based jails to replace the detention complex on Rikers Island. The plan hinges on a continued reduction in the city jail population, in large part brought on by state and city criminal justice reforms and changes in city policing. Various aspects of the costs, and potential savings, involved in shuttering the Rikers jails and opening the four new ones – from construction to Department of Correction personnel to transportation of detainees to social services – were part of the larger debate over the plan that intensified to a fever pitch just ahead of the Council’s definitive vote.

But nowhere have all the latest figures and projections been brought together in one place to truly examine what the jails plan, and its many connected pieces, like changes to treatment for some people with serious mental illnesses, might cost and save the city. As with many other city projects and plans, there are capital costs related to physical infrastructure and operational costs related to people and programs.

The cost of the construction of the four new jails was initially pegged at $11 billion, a number that has since been revised down to $8.7 billion and could see further projected reductions based on last-minute changes made to the plan through negotiations that will reduce the height of each new planned facility. That number could also increase, of course, as construction projects, especially larger ones, often come in over projections. But as much as those projected costs were used in arguing against the new jails plan, they do not factor in the money that would be needed to repair and upgrade facilities on Rikers or the several borough-based jails that are currently operational but antiquated.

The jails plan also comes with a spate of additional community investments and funding for citywide initiatives aimed at further reducing the number of individuals caught up in the criminal legal system and incarcerated in city jails, and recidivism among those who spend any time in jail and thus become more likely to return.

Also on the operational side are projected savings from an eventual reduction in Department of Correction officers and the far more limited transportation costs as detainees will be jailed closer to courthouses.

The Rikers Island closure plan was proposed in April 2017 by the Independent Commission on New York City Criminal Justice and Incarceration Reform, led by former Chief Judge Jonathan Lippmann. The commission was convened by former City Council Speaker Melissa Mark-Viverito at a time when Mayor Bill de Blasio was hesitant to support such a plan. The mayor had initially called the closure of the 400-acre jail complex a “noble idea” but dismissed it as impractical. He later changed his tune, with Mark-Viverito, Lippman, and other criminal justice reform advocates all but making it impossible for him to oppose it.

The Lippman Commission estimated in its initial report that building five borough-based facilities would cost about $11 billion in capital funding. In the city’s 10-year capital budget, adopted earlier this year, the de Blasio administration allocated $8.7 billion over ten years for the four borough-based jails, one in each borough other than Staten Island. The jails in the boroughs other than the Bronx will replace existing jail facilities, including two operational and a defunct complex in Queens. The Bronx jail will help close “the barge” in that borough.

The $8.7 billion allocation marked a $7.7 billion increase in ten-year capital costs for the Department of Correction, with the administration reducing the timeline for construction by one year. “We feel confident looking at everything we know for sure that we can get the entire building effort done nine years from day one – so that will be 2026,” de Blasio said at a news conference on the release of his executive budget proposal in April of this year.

Those costs are preliminary estimates and relatively fluid. Ultimately, according to the mayor’s office, the cost of the new facilities will be determined on the basis of a competitive procurement process for design and construction. In final negotiations with the administration, the City Council also reduced the planned heights for the new buildings – the facilities in the Bronx and Queens will rise to 195 feet (about 19 floors) and the ones in Manhattan and Brooklyn will be 295 feet tall (about 29 floors) – which could further reduce the cost.

The city has yet to estimate the operational costs for the new facilities, though the smaller footprint compared to the eight jails currently operating on Rikers along with existing facilities in the boroughs is likely to lead to lower expenses. The current cost of running 11 jails across the city is about $2.7 billion for fiscal year 2020, which includes $1.36 billion in expense funding for the Department of Correction, $681 million in fringe benefits for DOC employees, $500 million for pensions, and $168 million for debt service.

The Lippman Commission approximated in a report put out this month that the new facilities could cut as much as $1.8 billion in annual operating costs from that number. Much of that is simple math. It costs about $247,000 to house an individual in a city jail for a year, according to the commission. The DOC also spends about $31 million each year to transport defendants between Rikers Island and courthouses and other appointments.

The new detention centers will be built to house around 3,300 total detainees and will hold 3,795 beds, down from the current jail population of around 7,200 and 14,000 beds across the system. The city will also reduce the number of correction officers at DOC, which the mayor has said will happen through attrition and not layoffs. That process may already be underway. According to the mayor’s office, there are currently no new incoming correction officer classes.

The 2020 fiscal year budget includes 11,816 full-time budgeted positions at DOC, down from 12,377 in the previous year. Expense funding for the agency, however was projected to increase in the outyears of the budget plan passed in June. In the 2021 fiscal year, the city estimates spending $47 million more on DOC operations and personnel (in city, state and federal funds), with that number dropping only marginally in 2022 and 2023.

The commission also looked at alternate uses for Rikers Island, including a potential expansion of LaGuardia Airport, new energy infrastructure, waste management facilities, and even a water treatment plant. Together, those could lead to about $7.5 billion in annual economic activity and create 50,000 jobs, the commission estimated, even bringing in revenue or reducing costs for other city agencies to the tune of millions. The cost to the city to develop those types of next-generation infrastructure projects would range from $15 billion to $22 billion.

The building of four new jails alone will directly create about 7,800 construction jobs over seven years, according to the Lippman Commission.

As part of the final deal ahead of the City Council vote, the city will also be putting an additional $391 million towards citywide and local investments at the insistence of the Council. “This is not just about making the facilities better, though that is important,” Council Speaker Corey Johnson said at a news conference prior to the Council’s vote on the jails plan. “It's about getting to the root of the problem of mass incarceration, and ensuring that people coming off of Rikers Island or other state prisons are able to reintegrate back into society and get the support they need.”

City Council Member Adrienne Adams, chair of a subcommittee that first voted through the jails plan, had announced that the investments would be about $470 million but that number was later amended. “Originally we included council initiatives for [Fiscal Year 2020] and one-shots by the administration, but the revised numbers only reflect the Points of Agreement,” said a Council spokesperson in an email. The points of agreement, formalized in a letter to the Council, include a range of new initiatives and expanded funding for current ones, and will ramp up till the 2023 fiscal year.

The jails plan estimates, especially on the construction side, do not account for delays and cost overruns, of course, for which the city’s capital planning and execution are notorious. “It's a giant, complex infrastructure project,” said Nicole Gelinas, senior fellow at the Manhattan Institute. “I mean, realistically, we're at the end of 2019, so they have five years to demolish three jails, mitigate the sites and build four new jails that they still haven't done design specifications for.”

“I think it would be miraculous really if the city were to achieve this on time and on budget,” she added. She also noted that the $8.7 billion for the jails plan doesn’t account for other facilities the city is building to house severely mentally ill detainees currently at Rikers. In March, as first reported by THE CITY, Health + Hospitals put out a request for proposals for consulting services on building Outposted Therapeutic Housing Units that would be attached to existing hospital facilities. There have been few details of how many beds those facilities would include and at what cost. “You could easily see that costing well above a billion dollars just to do that, and that's completely off the budget right now,” Gelinas said.

Gelinas predicted that the jails plan will face legal delays as well, which are prompted by even the simplest infrastructure projects like bus lanes. And, she said, the city has a lackluster record of capital project construction. “We just built the [Hunters Point library in Queens] that was half a decade late and basically twice its budget and it doesn't have facilities for the handicapped...I mean, even when these things are pretty straightforward, we're not all that good at it.”