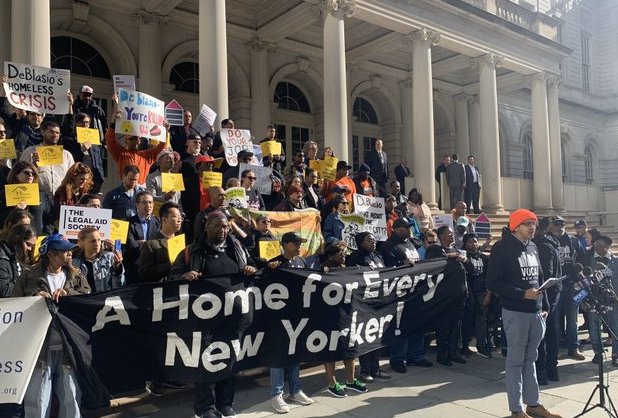 A coalition of housing rights advocates and elected officials is seeking a “new deal” for homeless people living in New York City, as one activist put it at a rally on Friday.

Members of the coalition gathered in front of City Hall to point out what they believe to be shortcomings of Mayor Bill de Blasio’s housing agenda and the dangers of celebrating too early the plan to shutter the Rikers Island jails. The jails are a cornerstone of the city’s criminal justice system that the advocates say have helped destabilize communities and contribute to the cycle of incarceration and homelessness, particularly among black and Latino New Yorkers.

Just after the City Council’s Thursday passage of the new jails plan and in the shadow of the brutal killing of four homeless people in Chinatown two weeks ago, the groups are calling for a holistic approach to homelessness centered on adequate housing for at-risk New Yorkers.

The press conference, organized by VOCAL-NY and Coalition for the Homeless, came less than 24 hours after the City Council took the decisive vote to replace the Rikers jails with four new locally-situated jails. The vote is a historic step towards ameliorating what has been described as devastation to individuals, families, and communities caused by mass incarceration and lock-up inside the city’s blighted detention facilities. In addition to the ones on Rikers Island, the system includes antiquated jails in Manhattan, Brooklyn, and a Bronx barge that are all set to be replaced.

But the advocates at City Hall Friday say the city’s emphasis on replacing the Rikers jails without including affordable housing creation in new plans fails to address the root causes of mass incarceration and its relationship with the homelessness crisis. There are currently about 7,000 detainees in city jails and more than 62,000 homeless people in New York City.

The groups on Friday were rallying around a set of recommendations under the “House Our Future NY” campaign launched by Coalition for the Homeless to address the city’s shortage of meaningfully affordable housing. As part of the campaign the organizations are pressing for 30,000 more units of affordable housing dedicated specifically to homeless people, of which a vast majority -- 24,000 units -- would be newly created.

The groups are seeking action in three areas: permanently affordable housing for homeless New Yorkers; supportive housing for people who are homeless or at risk of becoming homeless and need social services on-site; and improvements in the city’s shelter system to materially address the experiences of people it is meant to serve.

“If you want to shut down Rikers Island and reduce the number of people who are incarcerated...and if you want to end homelessness in this city it starts with access to safe, affordable housing,” said Charles King, CEO of Housing Works, at the Friday rally.

“The only solution is housing,” said Felix Guzman, an organizer with VOCAL-NY who identified as formerly homeless and incarcerated. “We must build housing for the people that need it the most in our city.” Guzman questioned plans for the MTA to hire 500 new police officers aimed at addressing homelessness in the subway system and what he called the criminalization of street homelessness, explaining that some people who sleep on the street are afraid of the city’s shelters.

There are approximately 78,600 people in beds or chairs across the city’s shelter system or who are homeless and unsheltered, according to data provided by the city to the federal Department of Housing and Urban Development in January, and cited by advocates Friday. The count is greater than another frequently-cited metric -- roughly 60,000, the daily population of those living in Department of Homeless services shelters -- because it counts people in shelter placements not administered by DHS, such as ones for people with HIV and AIDS and people who have experienced domestic violence, said Craig Hughes of the Urban Justice Center, in an interview with Gotham Gazette. The figure also includes estimates of unsheltered people, he said. Hughes did not participate in the press conference but had discussed the metrics with organizers leading up to the event.

The DHS shelter census of roughly 60,000 has been relatively stable in recent years as the city has continued to implement a variety of programs, including rental vouchers and a “right to counsel” for thousands of low-income tenants, which has led to large drops in evictions. Still, many thousands of New Yorkers are cycling through the shelter system each year, and advocates say de Blasio’s approach is not designed to meaningfully reduce the city’s homeless population.

The $8.7 billion plan to construct new jails to replace Rikers Island capacity, which the City Council passed Thursday, came with $391 million in additional funds for community investment and criminal justice reform initiatives, according to a press release from the city. Among the reforms are tens of millions in pre-trial diversion programs, incarceration alternatives, and re-entry services. The plan also includes a provision to increase the number of supportive and transitional housing units for homeless people who have been involved in the criminal legal system.

“That plan needs to be enhanced and needs to be executed. If we talk about this thing as already done, then we have lost,” Public Advocate Williams said at the press conference. “I was pleased about some of the investments that I saw. Unfortunately, it seems like the majority of them have more to do with what happens inside the criminal justice system, as opposed to what happens to prevent people from coming in in the first place.”

“What we need to see is significant investment to the tune of the same amount of money that was put into that plan yesterday. Closing Rikers was never simply about bricks and mortar,” he added.

One of the groups’ central goals is the accelerated creation of permanently affordable housing accessible to the lowest-income New Yorkers.

The mayor’s housing plan, Housing New York, is a sweeping initiative to preserve or create 300,000 units of affordable housing over 12 years, coordinating across a myriad of public and private entities. An initial version of the plan (for 200,000 units over 10 years) was unveiled in 2014, later updated with the current goals, and as of June has led to the preservation of 91,500 rent-regulated units and creation of 43,900 such units, according to the program’s website.

But critics say it does not meet the affordability demands of the city’s lowest-income households. A report by the Association for Neighborhood and Housing Development (ANHD) found the ratio of housing unit development for “low-,” “very low-,” and “extremely low-income” was the inverse of the citywide need in terms of those populations.

The groups rallying at City Hall Friday also say the current housing projections are not sufficient to create an affordable landscape for future generations because they lack permanency. The ANHD report indicates that 234,520 subsidized affordable units could be lost by 2037 due to expiring housing programs.

There is “too much money being wasted for temporary housing. Give them permanent housing, they deserve it,” said Gail Gadsden of New York Communities for Change.

Supportive housing refers to domiciles that come with social services geared toward the diverse needs of homeless individuals and families. According to the city’s Human Resources Administration website, support units can come in the form of congregate housing -- meaning, supportive units make up a larger percentage of a building’s total housing and have on-site service providers -- and scatter-site housing, which are individual units located in private buildings that are served by contracted non-profits. The coalition is pushing for half the 15,000 units to be congregate and the other half to be scatter-site.

In 2016, Governor Andrew Cuomo announced his own plan to create 20,000 supportive housing units statewide over 15 years. According to recent reporting by Gothamist, the governor’s office has said the state has funded 5,348 units since 2016, but that only 1,426 are operational.

In addition to affordable and supportive housing, the groups backing the House Our Future campaign are seeking changes to the shelter system itself, including reforming the intake and assessment process and improving access to safe havens and emergency shelter placement for homeless living outside. Reforming the shelter system will encourage people to choose city services over the dangers of streets and public places.

“For example, for men there is only one intake center and then a handful of sites you may be sent to for assessment before ending up at your ‘official’ shelter. Intake and assessment sites are often the ones men are least willing to enter,” she told Gotham Gazette, “which is a big deterrent for many folks.”

“The community is calling for a caring and compassionate New Deal,” said Jawanza Williams, lead organizer at VOCAL-NY.

“I’ll be in office for another two years and a couple of months, you have my full commitment that this is priority number one,” said Brooklyn Council Member Stephen Levin. “We need to do this for the next generation.”