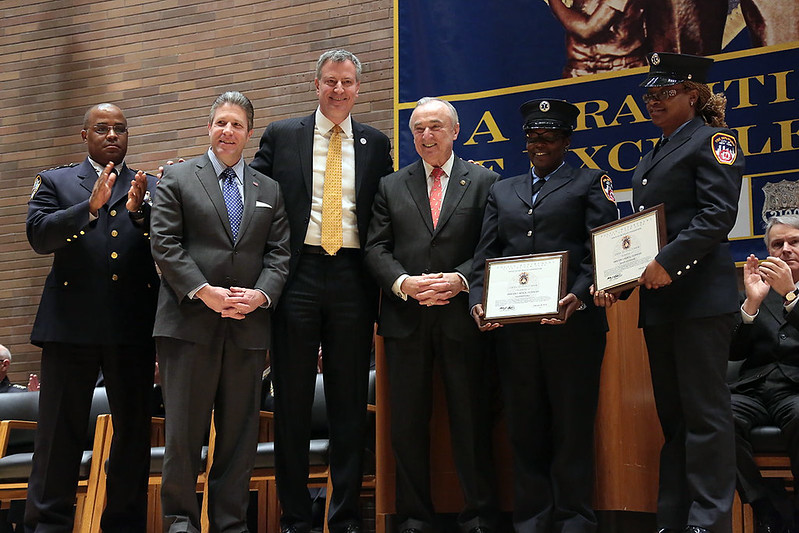 The PBA is urging its members and their allies to vote “no” on Question 2 on the ballot this fall in hopes of scuttling potential changes to the way the Civilian Complaint Review Board (CCRB) investigates and prosecutes officers accused of misconduct. A New York City charter revision commission has placed five questions with 19 proposals on the ballot this year, with voting across the city set to begin October 26 with early voting and conclude on Election Day, November 5.

In a statement posted to the PBA’s Twitter account at 9:35 a.m. on Monday, the union wrote, “Political extremists and cop-haters have been attacking NYC police officers in the streets for years. Now, they're doing it at the ballot box. Don't let the criminal advocates expand @CCRB_NYC's power. VOTE NO ON BALLOT QUESTION #2 #VoteNoOn2”.

Accompanying the message is an image of an apparent protestor with most of their face hidden by a bandana and a Guy Fawkes mask, holding a Blue Lives Matter flag upside-down with the words, “F*** THE POLICE,” written across it (the union appears to have censored the expletive). Scrolling around the figure and the flag reads the text: “Do you know what’s on your ballot? Because they know…”

The same image and message is on the PBA website homepage. When clicked the ad directs readers to a page where they must enter their member log-in credentials to access what is posted.

Question 2 on the ballot contains five changes to the CCRB’s jurisdiction and operations. They include expanding the number of appointments to the board and who makes them; giving the executive director subpoena power; guaranteeing the CCRB’s budget; and requiring the police commissioner to provide an explanation when deviating from the board’s disciplinary recommendations.

And the fifth and perhaps most controversial of the proposed CCRB amendments is an expansion of the Board’s jurisdiction to allow it to investigate officers suspected of lying to CCRB investigators. Currently, the agency must refer those cases to the NYPD even if it has proof an officer has lied while under investigation. The amendment is limited to apply only to officers already under CCRB investigation for other types of misconduct under its jurisdiction.

The PBA has also submitted a statement of opposition to the city’s Campaign Finance Board to be included in its Voter Guide, which illuminates the union’s position on the proposed amendment. “Ballot Question #2 would give CCRB sweeping new powers and drastically increase its budget,” the statement reads. “It should not be adopted. CCRB is a dysfunctional, ineffective agency, and increasing its authority would harm police officers and have serious ramifications for public safety.”

The statement claims strengthening the CCRB would “embolden anti-police extremists, and reduce the authority of the Police Commissioner.”

The CCRB is an all-civilian agency separate from the police department, though its Board often includes former NYPD officers. It is charged with substantiating certain misconduct complaints, prosecuting officers in departmental trial settings, and recommending discipline to the police commissioner. The Board is appointed by the mayor with eight of its 13 members nominated by the City Council and police commissioner. Under the city charter, the CCRB’s jurisdiction is limited to four types of civilian complaints: excessive use of force, abuse of authority, discourtesy, and offensive language, and it can only investigate when a complaint is filed.

Police reform advocates and CCRB Chair Fred Davie believe the proposed changes would help the board carry out its mandate as outlined in the charter.

“Let me just say, generally, I cannot advocate for anyone to go out and vote in favor of these proposals. But I think I’m free to talk about how I view their impact on the agency,” said Davie in an interview with Gotham Gazette earlier this month.

“And I think, on the whole, they are good for the agency and will help to advance civilian oversight of certain disciplinary aspects of the NYPD, those that fall within our jurisdiction,” he added.

Referring to the proposal to bring suspected officer lying under the CCRB’s authority, Davie said, “Obviously, I think we should be able to investigate those. I think that...it adds integrity to the process. It adds another level of accountability.”

A representative from Communities United for Police Reform (CPR) Action Fund, the political arm of a coalition of police reform and civil rights activists, said the group is urging voters to vote “yes” on Question 2. In an email sent to Gotham Gazette Monday, Monifa Bandele of MomsRising Together and the CPR Action Fund said, “Condoning false statements by police is dangerous for everyone, which is why CPR Action Fund is calling on all New Yorkers to vote Yes on 2 - to help ensure that the CCRB can investigate these incidents.”

“New Yorkers are increasingly rejecting racist and baseless fear-mongering by the police unions who protested the firing of the officer who killed Eric Garner,” the statement continued. “The latest bad-faith attempts by the PBA to advocate for police to be above the law and undermine the democratic process with lies is despicable."

In a second tweet posted at 12:07 p.m. Monday, the PBA quoted an article published in the New York Post in 2016 about a 2014 CCRB investigation carried out without a complaint on file. “‘The CCRB is so anti-cop that it is now accusing highly decorated officers of misconduct--even when no complaints are filed against them,” the tweet reads.

“This is a power grab by an agency with rampant anti-police bias. On Nov 5th VOTE NO ON BALLOT QUESTION #2,” the post continues, along with, “#VoteNoOn2,” a hashtag that currently appears more popular in states with stronger referendum traditions than in New York.

Like the other four ballot questions, Question 2 had not received any organized public opposition before the PBA’s campaign launched Monday. In fact, the only organized advocacy around the proposals at all has been by a coalition of voting reformers who are pushing voters to approve Question 1, which would institute a ranked-choice voting system in some New York City elections.

The other three ballot questions deal with issues in the categories of ethics and governance, city budget, and land use.

As of Monday, the PBA has not reported any independent expenditures with the Campaign Finance Board, according to Matthew Sollars, the agency’s director of public relations. Independent campaign spending must be publicly disclosed if it exceeds $1,000 to promote or oppose a ballot proposal or candidate, but the filing deadline for expenditures made up to and including Monday is not until the end of the week.

With few consequential races on the ballot, this election is expected to have especially low turnout. Only the citywide public advocate, the Queens district attorney, and a handful of judicial seats are up for election. Ballot referenda in New York tend to have even lower response rates than other contests on Election Day.

This year, voters will have the opportunity to cast ballots at early voting sites from October 26 to November 3, or on Election Day, Tuesday, November 5.

[Read: There are NYPD Oversight Measures on the Ballot - How Significant are They?]