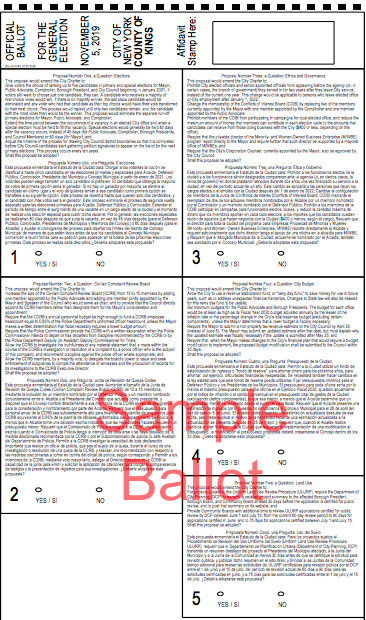 (a sample ballot - back side, with charter revision questions)

Some of the biggest decisions voters can make on New York City’s ballot this fall will be in the fine print.

The 19 city charter amendments being put before voters will appear on the back of the ballot in miniscule, 7.5-point font. The proposed amendments, presented in five “yes” or “no” questions, cover large swaths of the city’s core governing document and if approved have the potential to alter key components of how the city operates.

They include instituting ranked-choice voting for some elections, beefing up police department oversight, and more. A number of the changes are consequential but technical in nature and require voters to read a degree of granular detail. Language chosen by the 2019 Charter Revision Commission, certain legal requirements, and the desire to avoid a two-page ballot led the New York City Board of Elections to the 7.5 font that is of concern to election watchdogs.

“Generally speaking, as a matter of legibility one of the top [Election Assistance Commission] recommendations is to use a minimum 12-point font size for paper ballots, which of course aligns with public expectations as well,” according to Jarret Berg, a voting rights lawyer and co-founder of the nonpartisan election watchdog VoteEarlyNY.

In an election expected to have especially low turnout, and for ballot referenda, which in New York already tend to have lower response rates, the small font and the complexity of the questions could mean a very small number of voters will decide the outcome of the reforms. The ones that do will, for the first time, have an opportunity to cast ballots during nine days of early voting -- from October 26 to November 3 -- in addition to Election Day, November 5.

The city’s 2019 Charter Revision Commission developed the proposed amendments and the ballot language, but the city’s Board of Elections is responsible for the layout of the ballot, including the font size of the referenda.

“In fairness, I think the City Board would prefer -- all things being equal -- to offer a larger font size, but given several competing ballot layout and election administration considerations, providing a reasonable font size continues to be deprioritized,” said Berg.

There are a number of concerns and regulations the Board of Elections must take into account when designing the ballot, some of which conflict. Ballot questions, like the five that deal with issues of city elections and governance, must be written separately from the names of candidates according to rules set at the state level. According to the Board’s executive director, Michael Ryan, the ballot-reading machines require referenda to be printed on a separate sheet or side of the ballot in order to be properly scanned.

The Board of Elections tried using a two-page ballot to accommodate referenda during last year’s election to disastrous effect. That election, which included races for governor, Congress, state Legislature, and others, was marked by very high turnout, which along with the two-page ballot and inclement weather resulted in machines having to scan excessive volumes of paper and led to frequent malfunctions.

This year, there are very few elections to be decided. Each of the five questions appearing on the ballot contains three to five paragraphs of text covering multiple provisions (a total of 19). To keep them on a single sheet of paper, the board chose to squeeze all the questions onto the backside of the ballot using the tiny font.

The small font size “is so you could fit it onto a single page,” Ryan said in an interview. “We avoided as much as we could the prospect of going to a second page for all of the reasons we found out in November [2018].”

To assist voters, each poll site will be equipped with magnifying glasses at each privacy booth and poll workers have been trained to inform voters that ballot questions are on the back, according to Ryan. The ballots themselves instruct voters to flip the page with large arrows accompanied by the text, “Remember to vote on both sides.”

But Ryan is also encouraging voters to familiarize themselves with the ballot before they arrive at the polls using the BOE’s new website. The recently-launched site has a simple web address -- vote.nyc -- and is designed to be more user-friendly than the previous one. The homepage prominently features a poll-site locator where voters can enter their address and find out where they are assigned to vote during the early voting period and on Election Day (for most voters those sites are different). It can also show voters a preview of their unique ballot so they can review the candidates and ballot questions in advance.

“The days of waiting till you get to the poll site to figure out what you’re doing should be over. The information is available,” Ryan said. (There has also been some media coverage of the ballot questions, of course.)

The Board of Elections did not decide on the language or length of the questions it was responsible for laying out. That was done by the Charter Revision Commission, which developed them in conjunction with the city’s Law Department. The commission settled on the five question categories and the provisions within them over the course of many months of deliberations, soliciting recommendations and feedback from the public on nearly every dimension of the city charter.

“The BOE did not give a strict word length. We didn’t know how they would lay out the ballot but we attempted to balance providing clear and reasonably comprehensive questions while also providing enough background to allow voters to make intelligent decisions,” Marissa Solomon, the commission’s communications specialist, told Gotham Gazette.

Solomon said the Charter Revision Commission and the Law Department attempted to avoid lengthy descriptions while also steering away from legal jargon.

“The Board of Elections has informed us that abstracts, which contain more detail than the questions on the ballot, will also be available at polling places for voters who want more detailed information on one or more questions,” she added.

The layout of the ballot has been a focal point for election reformers and good government groups for years. It was something advocates sought to address this year when the State Legislature came under Democratic control for the first time in close to a decade.

“While there are several valid considerations that go into ballot design and layout, this is another area...where New York’s election law and practice has failed to keep up with modern notions of accessibility and basic fairness,” Berg told Gotham Gazette.

In March, the Legislature passed the Voter Friendly Ballot Act (VFBA), which codifies several design best practices that proponents say will make it easier for voters to understand and navigate the ballot. The bill has not been signed into law by Governor Andrew Cuomo; a spokesperson told Gotham Gazette that the legislation is under review.

The VFBA “does a number of interrelated things. It removes various requirements that are currently in law that make it more difficult to design the ballot effectively,” said Senator Brian Kavanagh, the bill’s sponsor, in an interview.

Right now, the ballots must have various images like party symbols and an index finger icon pointing toward candidate names, which take up space. The law “requires certain things to be all caps even though document usability professionals would tell you that all caps is not a particularly useful way” of increasing legibility, according to Kavanagh. “So some of the effects of that would be that you’d have more space on the ballot, especially on the other side of the ballot,” he said.

In terms of font size, the bill’s drafters focused on candidate names over ballot questions. “There is no mandate about font size for something like text of a referendum,” said Kavanagh, referring to the provisions of the bill.

“The thing that dictates the small size in New York City is something the city should change administratively,” he added.

Kavanagh believes one of the problems with the font size of ballot questions is that they have to be printed in multiple languages on the same page. He claims one way to fix that is to have multiple ballot styles with fewer languages printed on them.

“The city Board has the ability to do that and they have resisted that. I think they are concerned that administratively it’s hard to have different ballot styles,” he said.

Kavanagh admits having enough language-specific ballot styles would be a logistical challenge for the BOE. “But in my view it is far outweighed by the simple principle that people have to be able to read their ballots relatively easily,” he said, adding, “so I think it is a mistake for the city to be using 7.5-point font for these important questions that voters need to consider.”