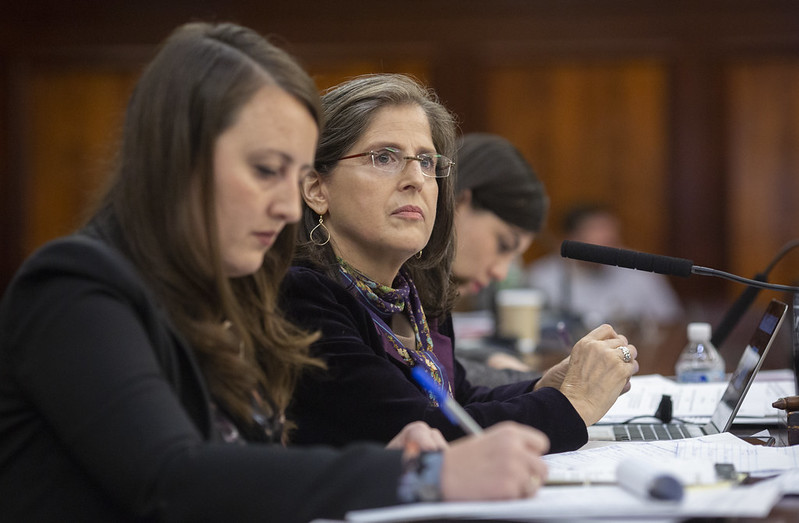 The New York City Council’s Committee on Women and Gender Equity and Committee on the Justice System held a joint hearing on Wednesday to examine the effectiveness of the city’s programs meant to reduce domestic violence by holding abusive partners accountable through treatment and rehabilitation. But representatives of the de Blasio administration could not provide metrics about how many programs there are currently in place across the city or how they are working. And even as the city is exploring new initiatives both inside and outside the justice system, an outside expert testified that the approach may suffer from a major flaw.

“As violent crime rates continue to drop across the five boroughs annually, the rates of domestic violence have remained pervasive,” Council Member Helen Rosenthal, a Manhattan Democrat and chair of the women and gender equity committee, noted in her opening remarks.

Rosenthal and Council Member Rory Lancman, a Queens Democrat who chairs the Committee on the Justice System, held the hearing to seek metrics and research from administration officials about the city’s Batterer Intervention Programs (BIPs), also known as Abusive Partner Intervention Programs (APIPs), that involve providing psycho-therapy and education to abusers to make them take responsibility for their pattern of behavior.

“While such programs have existed in some form or another for over 30 years, there is little proof that these programs actually put a stop to domestic violence, and reforms are necessary,” Rosenthal said.

According to a City Council analysis, the budget for the current fiscal year (FY2020) includes $11.1 million in funding for BIPs run by three city agencies – the Mayor’s Office to End Domestic and Gender-Based Violence (ENDGBV), the Mayor’s Office of Criminal Justice (MOCJ), the Administration for Children’s Service – and the Manhattan District Attorney’s office.

There are two tracks of the city’s efforts to work with abusive partners through BIPs: one involves those that are mandated by the courts to participate in programming, and a separate incipient approach deals with voluntary treatment for abusive intimate partners. The mandated programs, for instance, require an individual to attend a one-hour educational session every week for 24 weeks, where they are taught to recognize and take responsibility for their abusive actions.

Hannah Pennington, Assistant Commissioner for Policy and Training at ENDGBV, and Deanna Logan, Deputy Director of Crime Strategies at MOCJ, detailed the various efforts the city is undertaking along those tracks. But neither could point to definitive success.

When Lancman pressed them for a list of all court-mandated programs operating in the city, they could not provide one, though they did promise to cobble together a list by working with the Office of Court Administration by the end of the year.

“It's concerning that the city’s represented by two agencies that I would think would be most responsible for knowing what is going on in our courts when it comes to Batterer Intervention Programs, BIPs...and you don't know,” Lancman said.

Lancman’s focus was on the court-ordered program, specifically the Power and Control (PAC) program that is run by MOCJ to provide educational programming rather than punishment to domestic abusers. Logan, however, could not provide metrics of success on PAC programs that have been in place since 2018, though she said she had requested them. She also noted that the city has contracts for providing such services to only about 450 individuals.

She emphasized that the city’s approach had grown out of a collaborative, yearslong effort beginning with a roundtable in 2015 convened by ENDGBV and the Coalition on Working With Abusive Partners. That led to the creation of the Interagency Working Group on New York City’s Blueprint for Abusive Partner Intervention. The IWG worked with the Center for Court Innovation and Purvi Shah, an independent expert, to publish the Seeding Generations report that made recommendations for a citywide approach to abusive partner intervention.

The result of those efforts was the Interrupting Violence at Home initiative, launched last year, which takes a multipronged approach to tackling abusive partner violence outside the justice system. It includes engaging community-based organizations to provide batterer intervention services, for which the city is currently soliciting contract applications.

It is also meant to help develop a proven methodology for batterer intervention programming. “We want to look at the intervention as we're creating it to see that we are creating an intervention that actually is effective and that is responsive to the needs of abusive partners,” Pennington said.

“The way we are viewing this initiative and all the components of Interrupting Violence at Home is that there is an opportunity to build an evidence base of best practices,” she added.

But Pennington’s testimony was, in part, undermined by Dr. Linda Mills, professor and executive director of the NYU Center on Violence and Recovery, who has studied treatment programs for domestic violence offenders for 20 years.

“Studies suggest there is little evidence that BIPs are effective in reducing subsequent violence,” she said, citing a recent study she published along with research partner Dr. Briana Barocas. She said that BIPs are more effective when combined with other treatment approaches including restorative justice, cognitive behavioral treatment, and acceptance and commitment therapy.

To the city’s credit, as Pennington noted, the Interrupting Violence at Home initiative is focused on all those various aspects as it develops BIPs. The initiative is, in part, focused on implementing restorative justice practices in community-based interventions targeting domestic violence. ENDGBV and MOCJ also contracted the Center for Court Innovation to create the Dignity and Respect curriculum for court-mandated BIPs for male abusive partners. The curriculum relies on cognitive-behavioral methods to help abusers change their behavior.

Rosenthal said she was “disheartened” that the city was essentially tackling domestic violence as a relatively new issue, by only issuing contracts for community-based services four years after the ENDGBV roundtable, instead of giving it the urgency needed. “I'm just a little baffled to understand that we're not farther along,” she said.

She also pointed out that the need for services seemed to outweigh the supply, noting that district attorneys across the city handle tens of thousands of domestic violence-related cases each year.

Brooklyn District Attorney Eric Gonzalez testified that his office deals with 10,000 such annually, the majority of which are classified as misdemeanors. But, he said at the hearing that his office sends very few domestic violence offenders to batterer intervention programs, either because they do not agree to participate or because of the costs that individuals cannot afford, and questions about the effectiveness of programs. “For even those who agree to participate, there is currently very little evidence tracking the efficacy of these programs,” he said, noting that he was reluctant to recommend disposing of a case through a BIP without concrete proof of success.

Several advocates also testified at Tuesday’s hearing, exhorting the City Council and administration to focus on pretrial services and programs that do not involve the criminal justice system.

Piyali Basak, supervising attorney at the Integrated Criminal-Family Defense Unit at Brooklyn Defender Services said BIPs should be free like most other court-mandated programs, and that the programs should be offered in the city’s ten designated languages to expand access, particularly in immigrant communities.

Audacia Ray, director of community organizing and public advocacy at the New York City Anti-Violence Project, noted a glaring lapse in the city’s current programs. “At this time, there are no LGBTQ-specific abusive partner intervention programs in New York State, and few programs that will serve women who are identified as abusive partners,” she said in her written testimony. Ray urged the Council to work with the mayor to increase funding to provide free programs that are “culturally responsive, inclusive, and affirming across the spectrum of gender identity and sexual orientation, with specific programming designed to work with LGBTQ people who have caused hard to their intimate partners.”