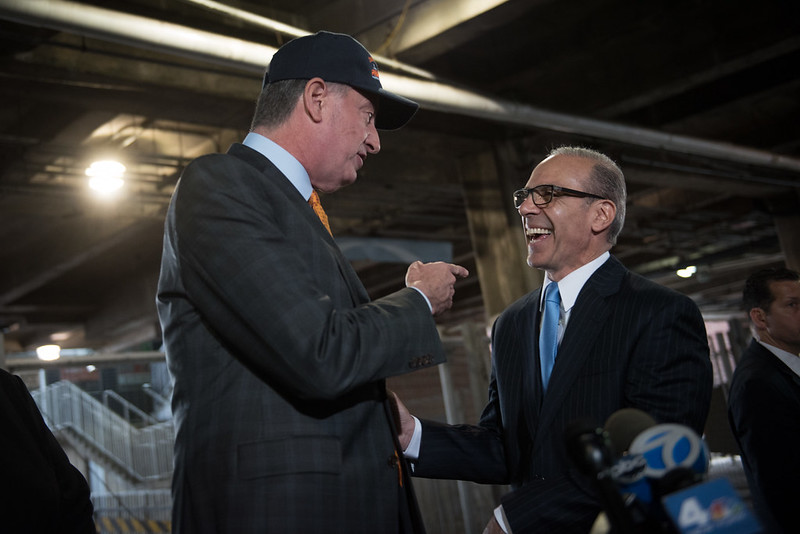 James Oddo, the outspoken Republican Staten Island Borough President, doesn’t want to talk about President Donald Trump or the contentious congressional race heating up in his borough, and says he won’t run for mayor of New York City or any other elected office ever again. But none of that’s to say that the zip is coming off Oddo’s trademark chin-music political fastball.

“The bureaucracy is too big and and the reality is but for one time—during Rudy Giuliani—that's when we were treated really well...So yeah, I would want to see us be our own city,” Oddo said of Staten Island secession from New York City, during a recent appearance on the Max & Murphy podcast.

Oddo, an avid baseball fan, was asked the question of the ongoing but recently rekindled debate about Staten Island becoming its own city, jump-started again as his fellow Staten Island Republicans, City Council Members Joe Borrelli and Steve Matteo, have now introduced legislation seeking a study of secession.

Oddo said that after Mayor Rudolph Giuliani, a Republican, gave Staten Island special treatment, it was dealt with fairly well, as “one of five,” under Mayor Michael Bloomberg, a Democrat-turned-Republican-turned-independent (and now Democrat again as he seeks the presidency), but frustrations have grown again under Mayor Bill de Blasio, a liberal Democrat.

As for de Blasio, whom Oddo considers a personal friend, he said: “The perception, whether it's the truth or not, let's put that aside; the perception of this administration from early on was they're not about delivering services. Well, it's the Mayor's Office; it’s the Department of City Planning; it’s the Department of Transportation. That's your job. And so my job is, instead of working with my partners in government, is too often dragging them along.”

“Some commissioners, some agencies...they want to work with you,” Oddo said, digging into one of his favorite topics: his battle with government bureaucracy. “Some aren’t led well and there’s bureaucracy... some agencies again are really responsive -- School Construction Authority...Lorraine Grillo: absolute best; City Planning: absolute worst; insular; indifferent defiant.”

Oddo emphasized that his goal as borough president has been to steer clear of partisan bickering and instead focus on improving the effectiveness of his office and the city agencies it interacts with on a daily basis in its efforts to provide better services to Staten Islanders.

“My mission was to get Staten Island a little better,” he said during the wide-ranging interview, reflecting on what will soon be six years as borough president. “I’ve never been ideological. I see my job as to establish relationships in order to get stuff done,” he said. As he often does, Oddo indicated that he works the phones and schedules meetings and pushes buttons in order to get answers and action from city agencies, but stressed that such progress shouldn’t depend on whether he can personally call the mayor and get him to spur a city commissioner to action.

Oddo continues to search for broader systemic change in how government does business. What does it ultimately come down to? Leadership at the top that establishes the right get-it-done culture, including striking the right balance of delegation and empowerment.

“You have to be hands on. You have to lead. You have to have to surround yourself with talented people who are leaders. You have to allow them to lead, but there's got to be accountability to you,” Oddo said.

A major difficulty in delivering effective government services comes down to a dysfunctional agency culture, Oddo said. City commissioners, for instance, enjoyed considerable power during the Bloomberg administration; Oddo called this the “golden era” of being a commissioner as Bloomberg kept many of the same officials for much or all of his 12 years, allowing the commissioners to run their departments without extensive outside accountability. The negative side of that era, Oddo said, is that those commissioners who were there a long time could become too calcified in their ways.

Local Issues
Oddo takes a very conservative approach to development on Staten Island, in part, he says, the island’s infrastructure can’t handle significant population growth and in part because Staten Islanders like their communities the way they are, and live on Staten Island to have something of a suburban lifestyle.

The borough president is frustrated by the recently-passed rezoning of part of northern Staten Island, which was led by the City Planning Department and approved by City Council Member Debi Rose, and he says the area isn’t ready for given its limited infrastructure.

Oddo said he received support about combating “irrational development” from de Blasio, but that the results have been disappointing. The mayor charged City Planning with taking on the issue on Staten Island, but the department only created a working group, which met once, and no further action was taken, Oddo said.

But Oddo’s pleased with progress, in part due to his partnership with first-term Democratic Congressional Rep. Max Rose and federal funding, on the way in the form of an East Shore Seawall, as well as the coming expansion of the city’s fast ferry service to the borough.

Oddo’s list of priorities over his final two-plus years in office include implementation of the early phases of the seawall and the ferry service, continuation of his public health agenda, and devoting resources towards philanthropic organizations such as Meals and Wheels and Staten Island’s Children’s Aid Society.

“I don’t want to say it's, like, ‘It's personal, it's my time,’ but some of this is, when I look back, I want to make sure that, you know, I live true to my values,” he said, indicating repeatedly that he is focused on getting as much done as possible over the next two-plus years before he’s term-limited out of office.

Community health and wellness has been a major focus for Oddo, including efforts related to the proper amount of sleep, especially for young people. And Oddo argued that the benefits of investing in local health programs extend to all taxpayers.

“And if you're a taxpayer, if you are in my political party and you’re like, ‘What is Oddo doing on health and wellness? That's not what government should do,’ I could sit down and have a cold beer with him and I think make the argument from a very conservative point of view about as a taxpayer why I'm tired of paying for people's health care,” Oddo said.

Policing
On issues related to policing and crime in the borough, and the ongoing aftermath of the death of Staten Island resident Eric Garner, including the recent firing of NYPD Officer Daniel Panatalo, Oddo expressed overall optimism and in particular cited the increased presence of neighborhood coordination officers (NCOs), part of the neighborhood policing model de Blasio has instituted across the city, as a successful program.

“I think we are in a much better place today than we were a few years ago in terms of overall police-community relations,” Oddo said. “The NCOs and community policing has gone a long way. It’s a major success on Staten Island…[Neighborhood policing] works for different reasons in different parts of the borough in terms of race relations. I think the community has gotten to build a relationship with these cops. I think the police officers have gotten to build relationships with the community. I think the tensions have dissipated to a large degree.”

On Pantaleo’s firing and the atmosphere on Staten Island, where many NYPD officers live, Oddo said that the process, while difficult for the community, had not appeared to undermine the progress around police-community relations or how officers are doing their jobs.

“There’s been no ‘Pantaleo effect’ that we can see,” he said, referring to the notion that after Pantaleo’s firing officers took few police actions out of hesitation or protest. “They’re going out there, and they’re doing a good job,” Oddo said of police officers.

Politics
“You won’t see my name on a ballot in a competitive race again,” Oddo said at one point in the interview. But why not run for mayor, given Republicans’ only chance to win could be a more moderate, government service-oriented straight-talker? “I don't think I can win. And I don't want those parts of the job,” he said of some of the politics.

He continued: “I do, though, have aspirations and ambitions of actually being on the inside...Put me on the inside with some TNT and watch me blow up the bureaucracy.” Oddo has previously said a dream job for him would be first deputy mayor. Reminded of this during the interview he said he wouldn’t even need that high of a position, just some control over key pieces of the city government he’s been wrestling with for so many years from outside mayoral administrations.

Before the city is fully focused on the next mayoral race, the 2020 elections will dominate local and national politics. Those themes meet on Staten Island as first-term Democratic Representative Max Rose seeks reelection in New York’s 11th Congressional District, which includes all of the island and a slice of Brooklyn. Rose is expected to face State Assemblymember Nicole Malliotakis in the general election in a race that already has a lot of national attention, given that the seat has been somewhat reliably Republican in the past.

Oddo, who has developed a strong working relationship with Rose and does not appear close with Malliotakis, declined to give support for either candidate. However, while insisting that he was not taking “veiled shots” at either candidate, he broadly criticized what he called “perpetual campaigns” by career politicians seeking office over and over again.

“I don't like perpetual campaigns and I don't like two-year campaigns,” Oddo said. “And what this will be is...if Nicole Malliotakis beats Max Rose, Max Rose is going to run against her two years later. So this will be a perpetual campaign for four years. I don't think that's good for Staten Island. I don't think that's that that's good for the body politic.”

“The recovery has been the single most infuriating, heartbreaking experience of a nearly 30-year career in public service,” Oddo said, adding that he laid most of the blame on the administrations of Mayors Michael Bloomberg and Bill de Blasio.

“We had the opportunity to take the harder path and rebuild a different way, and we didn’t. We did incremental instead of transformative,” he said. Oddo’s hope was that the city would engage in acquisition for redevelopment, buying out homeowners in some places, and rebuilding communities more comprehensively, with real planning conscientious of a variety of needs and of potential disasters like Sandy. While he’s pleased about the coming East Shore Seawall, that is still years away and little has been done since Sandy hit to prepare Staten Island for future major storms.

New York is “no better prepared for the next storm” than before Sandy, Oddo said. “When you look at the final product, it doesn’t honor the people we lost [during Sandy] and it really is an example of government at its worst.”